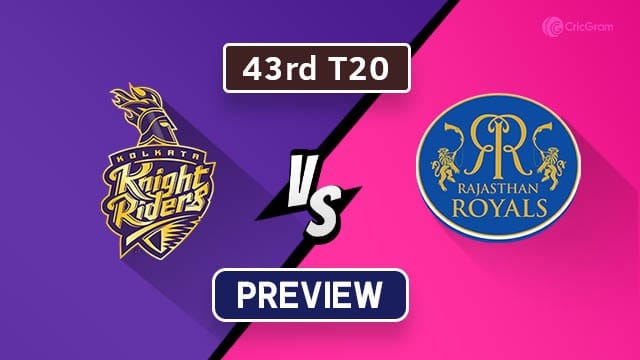 The 43rd Match of Indian Premier League 2019 will be played between Kolkata Knight Riders and Rajasthan Royals. We are covering KKR vs RR Dream11 Team Prediction, Preview and Probable Playing XI for the T20 match. The match is to be played at Eden Gardens in Kolkata.

Kolkata Knight Riders are sitting in the sixth position in the points table with four wins and six losses. They have lost five matches on the trot and are in sheer need of momentum. In the last encounter, They were defeated by Sunrisers Hyderabad by a big margin of 9 wickets. Batting first, Chris Lynn and Narine gave a good start to the team but could not continue the momentum and gave a target of 161 runs to SRH. Lynn scored 51 while Rinku scored 30 runs. Defending the target, KKR bowlers failed to impose any threat on Warner-Bairstow leading to another loss for Kolkata. KKR will hope to get back into winning ways and improve their standing in the points table by defeating Royals.

Rajasthan Royals are on the bottom end of the points table with three wins in ten encounters. They lost their last match to Delhi Capitals by 6 wickets. Batting first, Ajinkya Rahane scored a brilliant knock of 105* runs and was supported by Steve Smith who scored 50 runs to take the team to a total of 191. Defending the target, Rajasthan bowlers could not restrict DC batsmen leading to the comfortable chase of the target. Shreyas Gopal and Archer were the only positives with the ball with former taking two scalps. Royals will come all guns blazing to win remaining encounters and keep their slim chance of qualification alive.

Kuldeep Yadav will most probably come back in the playing XI replacing KC Cariappa.

Carlos Brathwaite or Matt Kelly can also replace Harry Gurney as he has failed to make a mark in IPL’19.

Robin Uthappa can also play this match, If he play then likely to Shubman Gill or replace Rinku Singh.

Andre Russell and Sunil Narine will play the role of an all-rounder.

Y Prithviraj and Andre Russell will lead the pace attack along with H Gurney or C Brathwaite.

Jos Buttler has gone back to England while Ben Stokes and Jofra Archer will play their last encounter in pink jersey before joining England Cricket team.

Ashton Turner has made a dreadful start in his IPL career with three golden ducks and is likely to be replaced by Liam Livingstone.

Jaydev Unadkat has also not bowled up to mark and can be risky. If Turner vacant his overseas spot, Then Ish Sodhi or Oshane Thomas can replace them.

Ben Stokes, Stuart Binny and Riyan Parag will play the role of an all-rounder. J Archer and Shreyas Gopal can also do big hitting.

Jofra Archer and Dhawal Kulkarni will lead the pace attack along with S Binny. Stokes is not bowling due to injury issue.

Shreyas Gopal will be the key spinner for Rajasthan along with Riyan Parag.

If you liked KKR vs RR Dream11 prediction, then follow us on Twitter for Latest Cricket News.