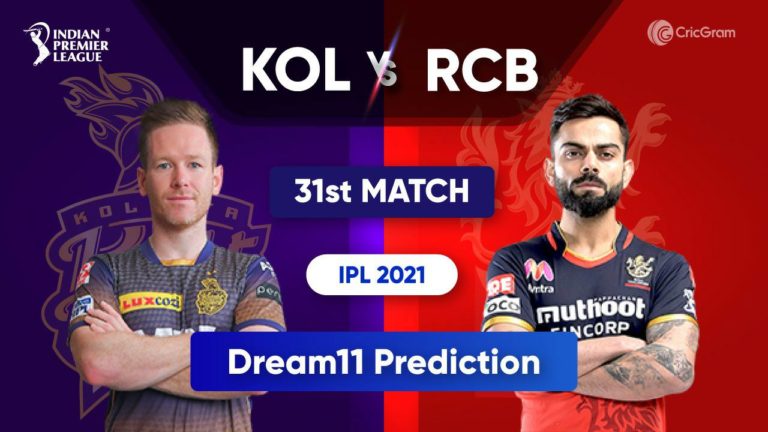 Kolkata Knight Riders and Royal Challengers Bangalore will play against each other in the 31st match of IPL 2021 at Sheikh Zayed Stadium, Abu Dhabi. We will cover KOL vs BLR Dream11 Prediction, Probable Playing XI, and Fantasy Cricket Tips of IPL 2021.

Kolkata Knight Riders had a tough time in the first half of the season as they lost five out of the seven matches and are currently at the 7th position on the points table.

The openers, Nitish Rana and Gill, struggled to give a good opening partnership to the team. At No.3, Tripathi batted well in some of the matches but failed to maintain consistency. Skipper Morgan has been entirely out of the form this season and played only one good inning.

In the middle-order, Russell batted aggressively and scored some important runs in some of the matches. Dinesh Karthik and Pat Cummins played the role of finisher well so far in this season.

In the middle-order, Russell batted aggressively and scored some crucial runs in some of the matches. Dinesh Karthik and Pat Cummins played the role of finisher well so far in this season.

Even the bowling unit has been struggling with its performance. The pace duo, Cummins and Prasidh Krishna have been the leading wicket-takers of the team. Narine has failed to pick up wickets consistently in the spin department, but Varun Chakravarthy has performed well.

Kolkata Knight Riders need to win as many matches as they can in the second half of the season to qualify for playoffs.

Royal Challengers Bangalore has won five out of the seven matches and is currently at the points table’s third position.

Virat Kohli and Devdutt Padikkal are opening the innings this season and put up some good partnerships. No.3 has been a matter of concern for RCB. The middle-order has been brilliant so far with this season, as Maxwell and Ab de Villiers are the team’s leading run-scorers.

With Tim David and Wanindu Hasaranga, the problem of power-hitters down the order is sorted for RCB. Even Kyle Jamieson and Harshal Patel batted well in some of the matches and scored some crucial runs.

The bowlers have performed well in this season for RCB, and they would be hoping to continue the same. Harshal Patel is the leading wicket-taker in the tournament but struggled in some of the matches, and Kyle Jamieson picked up some crucial wickets. Yuzvendra Chahal has struggled to pick up wickets, but Shahbaz Ahmed has been better.

Royal Challengers Bangalore would be hoping to perform the same way they did in the first half of the season.

The weather will be clear skies, and there will be no interruption during the match.

The pitch is a good batting surface, but it offers some help to the bowlers. The teams chasing had more success because of the dew factor, so winning the toss and fielding first will be the teams’ strategy.

Russell bats in the middle-order and scores quickly, and can also bowl a few overs of medium pace. He is a good choice for Captain and Vice-Captain in the KOL vs BLR Dream11 team.

Narine struggled a lot in this season with both bat and ball. He picked up only three wickets in four matches he played.

Shubman Gill is a talented young batsman but had a tough time scoring runs in the first few matches of the season.

He is a left-handed opening batsman and played well in some of the matches. Rana struggled toward the end of the first half of the season.

Chakravarthy is known as the mystery spinner and has picked a good amount of wickets this season.

He is a right-arm fast bowler. Kiwi pacer Lockie Ferguson is known for his pace. He didn’t played 1st leg of IPL 2021. L Ferguson is very good pick in KKR vs RCB Dream11 Team for today match.

Virat Kohli batted well in the seven matches so far but failed to score quickly. He is still a good pick as a Captain and Vice-Captain in KOL vs BLR Dream11 Team.

He is a young left-handed batsman and opens the innings along with Kohli. Padikkal has a hundred to his name already this season.

Maxwell batted well, scoring fifties in the initial matches but appeared to be struggling towards the end of the first half.

ABD has been the most consistent player for RCB across many seasons and also played a couple of match-winning knocks this season.

Chahal is one of the key bowlers for RCB but has not been up to the mark this season and was also not selected in the T20 WC squad. He must be eager to prove himself this season.

He has been brilliant for RCB this season and is currently the leading wicket-taker.

Jamieson picked up some crucial wickets and scored some runs down the order.

This is a risky match for small leagues so try to play only Grand Leagues.