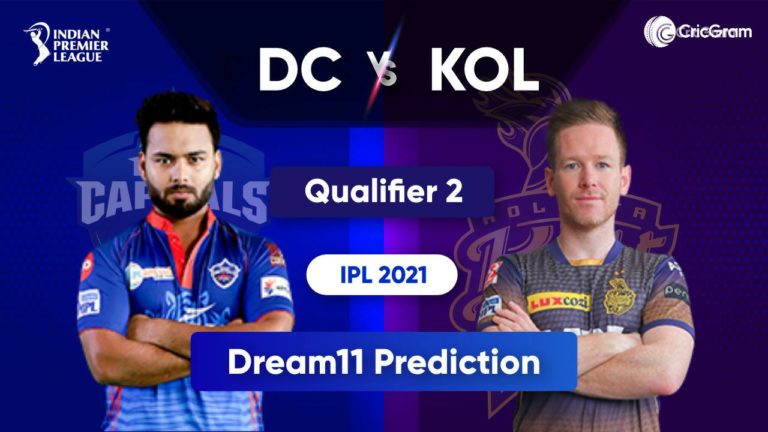 Kolkata Knight Riders vs Delhi Capitals will play in the Qualifier 2 match at Sharjah Cricket Stadium, Sharjah, in IPL 2021. We will cover KOL vs DC Dream11 Prediction, Probable Playing 11, and Fantasy Cricket Tips of IPL 2021.

This season, Kolkata Knight Riders have made a brilliant comeback by finishing at the 4th position on the points table and won the Eliminator against RCB.

Shubman Gill and Venkatesh Iyer have been batting well and providing a decent start to the team. In the middle-order, Nitish Rana and Rahul Tripathi performed well in some innings but have struggled lately. Narine played a brilliant inning in the last match, and Dinesh Karthik scored some crucial runs.

The bowlers were the major reason for KKR’s win in the Eliminator match. Narine and Ferguson bowled brilliantly, picking up four and two wickets, respectively. Varun Chakravarthy has also bowled well.

Kolkata would want to continue the momentum and win against Delhi Capitals in Qualifier 2 of the IPL 2021.

Delhi Capitals were at the top of the points table but lost in Qualifier 1 against CSK and will play in Qualifier 2 against Kolkata Knight Riders.

Dhawan failed to continue his good form in the last match, but Prithvi Shaw batted beautifully, scoring 60 runs. At No.3, Shreyas Iyer has been unable to score runs in recent games. Pant batted well, scoring an unbeaten fifty, and Shimron Hetmyer also played a good inning in the last match.

The bowling unit has been struggling for the last few matches. Nortje and Avesh Khan are the consistent wicket-takers, but they went for runs, and Tom Curran bowled well, picking up three wickets. Rabada appeared to be struggling and has been wicketless for quite some time.

Delhi Capitals would be hoping to win Qualifier 2 of IPL 2021 and qualify for the Finals.

The temperatures have been high throughout the season and are expected the same for Qualifier 2.

Most of the games at this venue have been low scoring. The batsmen have struggled a lot, and the spinners had a brilliant record at this pitch in this season. Chasing would be the right option for the teams winning the toss.

Sunil Narine performed exceptionally well in the last match by picking up four wickets for just 21 runs and scored 26 runs from 15 balls. He is very good Captaincy choice in KOL vs DC Dream11 Team.

Gill has batted well in the last few matches and scored 29 runs in the previous game.

Venkatesh batted well in the initial matches of the season but has appeared to be slow down recently. He scored 26 runs from 30 balls in the last game.

Ferguson bowls raw pace and has been successful at picking up wickets. He got two wickets for 30 runs in the last game.

Varun Chakravarthy has maintained an economy rate below seven runs and picked up some crucial wickets this season.

Russell is still out of the playing XI due to injury, and if he plays, he is a good pick in your DC vs KOL Dream11 team.

Dhawan has been inconsistent in the recent matches and scored only seven runs in the last game.

Shaw opens the innings for DC and appears to be back in form as he scored 60 runs from 34 balls.

Pant has provided stability to the innings throughout the season and scored 51* runs from 35 balls in the last match.

Except for a couple of matches, Shreyas Iyer has not scored much this season. He got out for just one run in the last game.

Avesh Khan is the crucial bowler for DC but has been conceding many runs but managed to pick up a wicket in the last match. Avesh Khan is very good Captaincy choice in KOL vs DC Dream11 Team.

Nortje is controlling the flow of runs and also picking up wickets. He got a wicket in the last match.

Rabada has been wicketless for the last few matches, but he can turn around with his bowling.

Axar has performed well with the ball this season but went wicketless in the last match.

R Ashwin only took 5 wickets in IPL 2021 but He can be a very good pick in KKR vs DC Fantasy Team.

Tripathi has not scored much in the recent matches, but he can be a trump card pick in Qualifier 2.