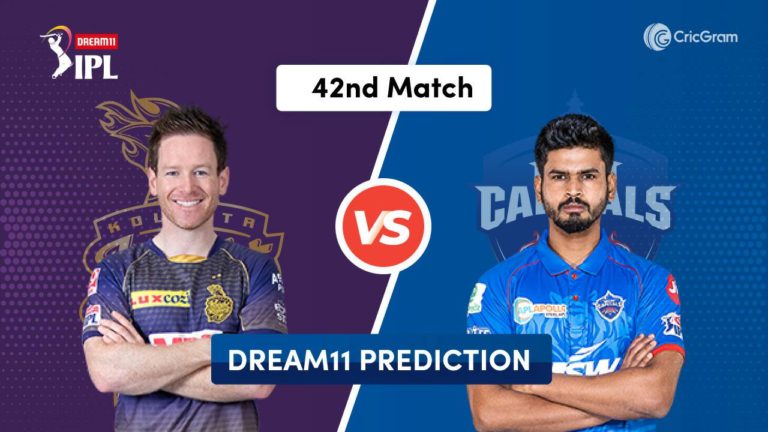 Kolkata Knight Riders are in a tricky situation as they are currently at the 4th position on the points table with 5 wins and 5 losses and a total of 10 points.

Knight Riders have played well and converted losing matches into winning them and lost some games very badly. They played disastrously in the last game as they put up only 84 runs in 20 overs and lost eight wickets. Andre Russell being injured and Narine missing from playing XI has been the most significant setback for KKR.

They have not been getting a good start from the openers, which puts a lot of pressure on the middle-order batsmen. Rahul Tripathi has not been able to score from the last couple of matches. Shubman Gill is the leading run-scorer for KKR, but he has been batting at just a strike rate of above 100.

Nitish Rana has looked out of form, and Dinesh Karthik has performed brilliantly in some games but has mostly struggled to score runs this season. Eoin Morgan has been performing decently, and Andre Russell, who is known for his brutal six-hitting, hasn’t been effective with the bat but has been impressive with the ball.

Even though Lockie Ferguson has played only two matches, he has bowled superbly in both the games. Pat Cummins has been bowling well but hasn’t been able to pick up wickets, which have also been among the team’s problems.

The youngsters Prasidh Krishna, Shivam Mavi, and Nagarkoti have been performing their roles decently. The spin department is being handled by Varun Chakravarthy, who has been consistently picking up wickets in every match, and also Kuldeep Yadav, but he has not played all the games this season.

Kolkata still has a perfect chance of qualifying for playoffs and need not worry much. They need to perform well and win at least two out of the remaining four matches.

The Delhi Capitals have performed brilliantly so far as they are currently at the 1st position on the points table with seven wins and 3 losses and a total of 14 points.

Dhawan is in red hot form as he has scored back to back hundreds and becomes the first-ever batsmen to do that, but DC lost the last game despite a hundred from Dhawan. Shreyas Iyer has performed well, but he hasn’t scored many runs in the previous two matches. Rishab Pant and Prithvi Shaw are struggling very much to score runs this season.

Stoinis and Axar Patel have performed very well in their roles as allrounders as they have scored runs and picked up wickets whenever required. Hetmyer has played well in a couple of innings.

The bowling has been brilliant as Rabada has been consistently picking up wickets and is the leading wicket-taker so far in this season. He is accompanied by Anrich Nortje, who also bowls at a perfect pace and can also pick up wickets. The debutant Tushar Deshpande has also performed decently.

Ravichandran Ashwin has been a significant advantage this season because he bowls in the middle overs, controls the flow of runs, and picks up wickets.

DC has almost qualified for playoffs, and they need to try their remaining players to find out their best players who can perform well in the crucial stage.

Average 1st Innings Score: 158 (From 14 games played at this venue so far in this season)

Average 2nd Innings Score: 147 (From 14 matches played at this venue so far in this season)

The pitch has appeared to be slowed down from the past few matches, and it has not been easy to score runs here. Bowlers will have the upper hand in the remaining games at this venue in the season.

Six out of the Fourteen matches have been won by the team batting first so far this season, which super over decided one game.

He is a young right-handed batsman and has the talent of playing big innings. S Gill opens the innings and scored only 1 run in the last match.

He is a left-handed batsman and provides stability in the middle order. In the last match, Morgan batted well, scoring 30 runs.

He is a bowling allrounder and can be handy with the bat down the order. Cummins scored 5 runs and went wicketless in the last match.

He is a right-arm fast bowler and troubles the batsmen with his pace. Ferguson managed to pick up 1 wicket and also scored 19* runs in the last match.

He is a right-handed batsman and generally opens the inning. Tripathi scored only 1 run in the last match.

He is a left-handed batsman and generally bats at NO.3. Rana was out for a duck in the last match.

Dinesh Karthik is a right-handed batsman and generally bats in the middle order. He scored only 4 runs in the last match.

Shikhar Dhawan opens the innings for DC and is a good striker of the ball. He batted brilliantly, scoring 106* runs from just 61 balls in the last match.

He is a right-arm fast bowler and troubles the batsmen with his pace and bounce. Rabada bowled well in the last match, picking up 2 wickets, and is currently the leading wicket-taker in the tournament.

Skipper Shreyas generally bats according to the situation of the match. He is capable of playing big shots also. In the last game, Iyer batted decently, scoring 14 runs.

He is a right-arm fast bowler and hurries the batsmen with his pace. Nortje did not play the last match.

He is the wicket-keeper batsman for DC and can hit some big sixes if he gets going. Rishabh Pant scored only 14 runs in the last match.

He is a batting allrounder and can bowl a few overs of medium pace if required. In the last match, Stoinis scored 9 runs and went wicketless.

This young right-handed batsman opens the innings along-side Shikhar Dhawan. Shaw is an explosive batsman and tends to play big shots right from the start. He scored only 7 runs in the last match.

He is a right-arm off-break bowler and can also be handy with the bat down the order. Ashwin picked up 1 wicket in the last match.

He is a Left-arm orthodox bowler and can also hit some big shots. Axar bowled well, picking up 1 wicket in the last match.

He is a right-arm fast bowler and bowls at a good pace. Tushar was very expensive in the last match.

If Andre Russell and S Narine play this match then team will be updated.