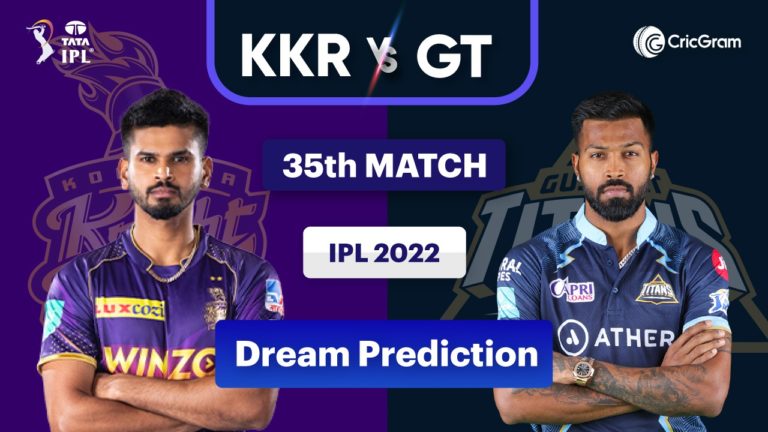 KKR were brilliant in the initial games but have lost their way in the last few games. They are placed 6th on the points table and have won just 3 out of their 7 games so far. They are coming into this game after losing their game against RR by 7 runs.

Bowling first in the last game, their bowlers were expensive and were unable to pick up wickets at regular intervals. This has been the story for them in the last 3 games. Sunil Narine was excellent in the last game and picked up 2 wickets.

Batting first in the last game, their top-order finally fired. Aaron Finch and Shreyas Iyer played fantastic knocks of 58 and 85 runs but did not get any support from the middle and lower order.

KKR are surely under the pump going into this game but as their skipper Shreyas Iyer mentioned that they like pressure situations and will be desperate to win this game.

They have certainly surprised everyone in this season and are currently at the top of the IPL 2022 Points table and have won 5 out of their 6 games so far. GT registered a fabulous win over CSK in their last game and won it 4 wickets.

Bowling first in the last game, they were excellent in the powerplay but leaked few runs at the backend. Alzarri Joseph looked impressive and picked up 2 wickets. Mohammad Shami also bowled very well and picked up one wicket.

With the bat, their top order was once again dismissed cheaply but David Miller played a outstanding knock of 94* runs and took the game till the end. Rashid Khan also played brilliantly down the order and scored 40 runs off just 21 balls.

The Pitches are getting slow in the last few games. The last game played at the venue was a low scoring one. Bowlers can get initial wickets. Winning the toss and batting first is also not a bad option.

The live streaming of Kolkata Knight Riders vs Gujarat Titans, 35th match of IPL 2022 will be available on Hotstar app and Star Sports Network.

You can also catch the live commentary, scorecard, and latest updates of the Indian Premier League 2022 match between KKR vs GT on IPLT20.com.

KKR vs GT Head to Head

Both the teams are playing each other for the first time in the tournament.

He is their best all-Rounder. Russell will do the finishing duties with the bat and also bowl in the death. He was dismissed for duck in the last game but picked up one wicket with the ball and is an excellent pick for C and VC in KOL vs GT Dream11 Prediction.

Finch will open the innings and is a attacking player. He finally returned to form in the last game and scored an excellent fifty.

He is the skipper of the team and will bat in the top order. Iyer was brilliant in the last game and scored 85 runs.

Cummins will bowl his 4 overs with the ball and can also score some runs with the bat. He picked up one wicket in the last game but was very expensive.

Narine is another very experienced player. He was excellent in the last game and picked up 2 wickets. Narine will also open the innings.

He is bowling brilliantly in this season. Yadav was average in the last game and went wicketless.

He is one of the best spinners in the competition and will bowl in the middle overs. Chakravarthy is not in good form and went wicketless in the last game.

He is one of their key batsman this season. Rana batted decently in the last game and scored 20 runs.

He is the skipper of the team and will bat in the middle-order and also bowl 4 overs with the ball. Pandya is in outstanding form and is a default pick for C and VC in KOL vs GT Dream11 Team.

Gill will open the innings and is one of their best batsman. He was dismissed for a duck in the last game but is a quality player.

He is one of the best bowler in the competition. Rashid went wicketless with the ball but scored 40 runs with the bat in the last game.

He will lead the bowling attack and is one of the best pacers. Shami was decent in the last game and picked up one wicket.

He is a very talented fast bowler and is known for his pace. Ferguson was average in the last game and went wicketless.

He will do the finishing duties for the team and is in brilliant form. Miller batted very well in the last game and scored 94* runs.

He is a Right-arm fast-medium bowler, He played 4 IPL matches and took 8 wickets.

Currently, Yuzvendra Chahal is the purple cap hodler. He took 18 wickets in 7 matches so far in Tata IPL.