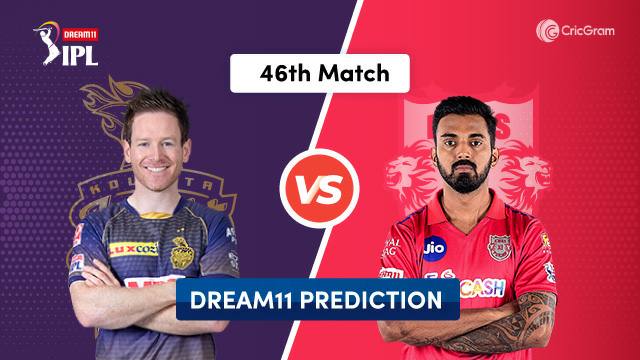 Kolkata Knight Riders are in a tricky situation as they are currently at the 4th position on the points table with 6 wins and 5 losses and a total of 12 points.

Knight Riders are very much alive in the race for playoffs as they won the last match very comfortably by 59 runs. Their top-order woes continue as they cannot get a good opening partnership, but their middle-order batted brilliantly in the last match.

Shubman Gill and Rahul Tripathi are very talented, but they have looked out of touch and cannot score correctly from the past few matches. Nitish Rana batted brilliantly and has looked in the right touch for the 1st time this season. Sunil Narine is back into the team and played an excellent knock in the middle order.

Andre Russell was not fit, so he was rested for the last match. Eoin Morgan has also been batting decently in the middle-order, but the form of Dinesh Karthik has been little concerning these days. Cummins has played some perfect innings with the bat and has finally started picking up wickets, which has been a significant relief for KKR.

Varun Chakravarthy has been handling the team’s spin department brilliantly and has been consistent in picking up wickets. Lockie Ferguson has been a perfect addition to the playing XI making their bowling attack even more vital.

The youngsters Shivam Mavi, Nagarkoti, and Prasidh Krishna, have been doing a decent job with the ball, and on the whole, the team looks much better, and they need to keep performing the same way.

The Kings XI have made a strong comeback in the race for playoffs by winning four consecutive matches and are currently at the 5th position on the points table with five wins and six losses and a total of 10 points.

They have excellent depth in their batting line up, which has been advantageous for them in the past few matches. KL Rahul and Mayank Agarwal have been scoring runs from the top for the team, but Agarwal faced an injury, and he was rested for the last match.

The bowling has been looked very good in the past few matches as the senior player Shami has been picking up wickets consistently along with the youngster Arshdeep Singh who has looked very impressive this season.

The spin duo Murugan Ashwin and Ravi Bishnoi have been bowling decently in the middle overs and have also picked some crucial wickets.

Average 1st Innings Score: 191 (From 9 matches played at this venue so far in this season)

Average 2nd Innings Score: 171 (From 9 matches played at this venue so far in this season)

The pitch here is considered perfect for batting, and we have seen some high scoring games here. But from the past couple of matches, it has appeared that the pitch has slow down very much, and it is not that easy to score runs here.

Five of the nine matches have been won by the team batting first at this venue.

He is a young right-handed batsman and has the talent of playing big innings. S Gill opens the innings and scored only 9 runs in the last match. He is a must-have pick in KOL vs KXIP Dream11 Team.

He is a right-arm off-spin bowler and is good at controlling the flow of runs, and consistently picks up wickets. Narine went wicketless nut scored 64 runs from just 32 balls in the last match. He is very good to pick in KKR vs KXIP fantasy team,

He is a left-handed batsman and a decent striker of the ball. Rana opened the innings in the last match and scored 81 runs from 53 balls.

He is a left-handed batsman and provides stability in the middle order. In the last match, Morgan batted decently, scoring 17 runs.

He is a bowling allrounder and can be handy with the bat down the order. Cummins bowled brilliantly, picking up three wickets for just 17 runs in the last match.

He is a right-arm fast bowler and troubles the batsmen with his pace. Ferguson managed to pick up one wicket in the last match.

He is a right-arm leg-break bowler and has been consistently picking up wickets. In the last match, Varun bowled extraordinarily, picking up five wickets for just 20 runs in his four overs.

Dinesh Karthik is a right-handed batsman and generally bats in the middle order. He scored only three runs in the last match and has looked out of form this season.

Skipper Rahul opens the innings for the team. He can play the shots right from the start of the inning and has two IPL hundreds to his name. Rahul scored 27 runs in the last match. He is very good Captain choice in KOL vs KXIP Dream11 Team.

He is the most destructive batsman in the history of IPL and can cause havoc if he gets going. Gayle batted decently in the last match scoring 20 runs.

A left-handed wicket-keeper batsman can play destructive innings in the middle order. Pooran scored 32 runs in the last match.

Shami is one of the experienced bowlers for KXIP. He bowls at a good pace and is good at controlling runs in the death overs. In the last match, he bowled well, picking up one wicket.

He is a bowling allrounder and can also be handy with the bat down the order. He bowled brilliantly, picking up three wickets for 17 runs in the previous match.

He is a left-arm fast bowler and has been consistent at picking up wickets. Arshdeep bowled brilliantly, picking up three wickets for just 23 runs in the last match.

He is a young right-arm leg break bowler and has impressed everyone with his performance. Bishnoi bowled well, picking up one wicket in the last match.

He is a right-arm leg-break bowler and has proved himself whenever he got a chance. Ashwin bowled well in the last match picking up one wicket.

He is a batting allrounder who can play big shots and bowl a few overs of spin. Maxwell has looked out of form this season and scored only 12 runs in the last match.