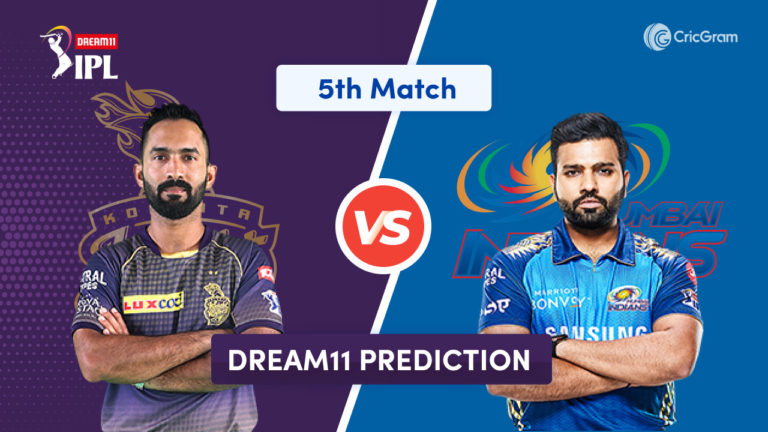 Kolkata Knight Riders have been one of the strongest teams in the history of IPL. They have won the trophy two times so far, one in the 6th season and another in the 8th season after they have played decently and qualified for the playoffs three times but have never managed to reach the finals.

This time around they have made some surprising changes in the team, they have let go of their destructive batsmen Chris Lynn and have made the highest auction of 15.5Cr for Pat Cummins. Their squad appears to have a right balance, and there are high chances that they might win the trophy this year.

The defending champions had to face disappointment in their 1st match against CSK as they lost the game by 5 wickets. They lost the toss and were put to bat first. Quinton de Cock 33 runs and Rohit Sharma 12 runs put up a partnership of 46 runs, but they both got out in quick sessions.

Suryakumar Yadav 17 runs, Hardik Pandya 14 runs, and Kieron Pollard 18 runs played decently, but the star of the innings was Saurabh Tiwary who scored 42 runs and helped MI post a total of 162 runs for the loss of 9 wickets.

With 162 runs to defend, they started well by picking up two wickets for just six runs in 2 overs. But after that, they gave away 115 runs without picking up a wicket. In the end, they picked up 3 quick wickets, but it was too late and thus lost the match by five wickets.

Average 1st Innings Score: 162 (From 1 match played at this venue so far in this season)

Average 2nd Innings Score: 166 (From 1 game played at this venue so far in this season)

The pitch here is a balanced one between bat and ball. But the spinners and medium pace bowlers will play a crucial role in picking up the wickets.

The team winning the toss here would want to bowl first because In the second innings due comes. Anything above 150 would be considered to be a good and fighting total.

The Weather will be hot, around 35 degrees, and there is no chance of rain.

He is a right-arm off-spin bowler and is good at controlling the flow of runs and consistently picks up wickets. Narine has been promoted as an opener due to his six-hitting abilities, and he looked in great form in the recently concluded season of CPL. Sunil Narine is very good Captain choice in KKR vs MI Dream11 Team.

He is an allrounder and is equally good with both bat and ball. In the last season, we saw the havoc done by Russell. He is a must in your Dream11 team.

He is a young right-handed batsman and has the talent of playing big innings. S Gill batted superbly when he was promoted as an opener in the last season

He is a left-handed batsman and provides stability in the middle order. Morgan has looked in right touch in the recent T20 series against Pakistan and Australia.

He is the wicket-keeper and also the captain of the team. Karthik is the most experienced players in the side and has won quite a few matches for them.

He is a bowling allrounder and can be handy with the bat down the order. Cummins is the most expensive player in this year’s auction. He looked in good touch in the recent series against England

He is a left-arm orthodox spin bowler and is very good at bowling googly. Kuldeep, along with Narine, will cause trouble for the batsmen.

He is a left-handed batsman and generally bats at NO.3. Rana can also bowl a few overs of spin.

Skipper Rohit Sharma is a destructive batsman and generally opens the inning for MI. He scored only 12 runs in the last match.

He is the wicket-keeper batsman for the team and generally opens along with Rohit. Quinton batted well in the last match scoring 33 runs. Q de Kock is very good picks in KKR vs MI Dream11 Team.

He is one of the top allrounders in India. Hardik Pandya scored only 14 runs and did not bowl in the last match.

He generally bats at NO.3 in the team. Surya scored 17 runs in the last match.

He is a bowling allrounder and has troubled many batsmen with his left-arm orthodox style. Krunal scored three runs but managed to pick up 1 wicket.

He is one of the best bowlers across the world. Bumrah was quite expensive in the last match but managed to pick up 1 wicket.

Boult is very dangerous and one of the top bowlers across the world. He is a left-arm bowler who can swing the ball early in the inning and controls the flow of runs in death overs. Boult bowled decently picking up 1 wicket in the last match.

He is a right-arm fast bowler and has made his debut this season. Pattinson scored 11 runs and also picked up 1 wicket.

He is a match-winning allrounder and has performed for the team with both bat and ball. Pollard scored 18 runs but did not get to bowl in the last match.