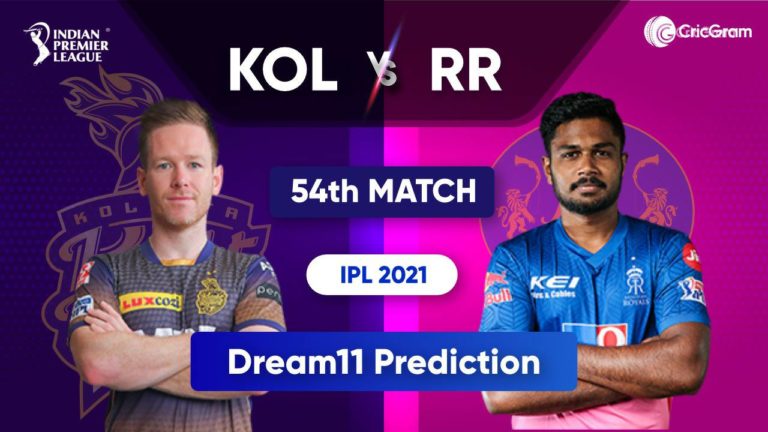 Kolkata Knight Riders and Rajasthan Royals will clash in the 54th match of IPL 2021 at Sharjah Cricket Stadium, Sharjah. We will cover KOL vs RR Dream11 Prediction, Probable Playing 11, and Fantasy Cricket Tips of IPL 2021.

Kolkata Knight Riders have performed brilliantly in the recent matches and are currently at the 4th position on the IPL 2021 points table with six wins and a total of 12 points.

Shubman Gill finally played a good inning by scoring a fifty in the last game, but Venkatesh Iyer and Tripathi, who were in good form, fell early. In the middle-order, Nitish Rana has been consistent, and Dinesh Karthik had finished innings brilliantly when he got the chance.

The bowling department is back in form as Varun Chakravarthy, Tim Southee, and Shivam Mavi picked up two wickets each. Narine has also been economical and picked up wickets in the recent matches.

Kolkata can qualify for the playoffs if they win this match against RR.

Rajasthan Royals have slipped down to 7th position with ten points on the points table as they lost the last match.

Only the openers, Lewis and Jaiswal, have been scoring runs consistently. Even the skipper, Samson, struggled in the last couple of matches, and in the previous game, Dube also fell early. The finishers, Glenn Phillips and David Miller have been in poor form.

The bowlers’ performance has been degrading in the recent matches. Mustafizur Rahman and Chetan Sakariya managed to pick up a wicket each, and the remaining bowlers went wicketless.

Rajasthan Royals are on the verge of elimination from the race playoffs, and only a miracle can make them qualify for the playoffs.

The temperatures are expected to be around 35 degrees during the match.

The pitch has been completely depleted and behaving extremely slow; as a result, the batsmen have struggled to score runs. Even the smaller boundaries have not helped much either this season.

Venkatesh can perform equally with both bat and ball. He scored only eight runs and went wicketless in the last match.

Narine is slowly getting back to form as he conceded only 12 runs in the last match but went wicketless.

This season, Varun Chakravarthy is one of the most economical bowlers and picked up two wickets for just 26 runs in the last match.

Tim Southee took 3 wickets in 3 matches. He is also bowling in death overs.

Tripathi is a brilliant striker of the ball but scored only seven runs in the last match.

Samson surprised everyone with his performance this season but scored only three runs.

Evin Lewis has provided a good start in almost every match that he has played this season. He scored 24 runs from 19 balls in the last game.

Mustafizur was expensive in the last two matches but managed to pick up a wicket.

Jaiswal can play big innings and be a match-winner, but the main problem has been his inconsistency. He scored 12 runs in the last match.

Sakariya has troubled many batsmen with his medium-pace this season. He bowled a maiden over in the last match but was also expensive and managed to pick up a wicket.

He is one of the top all-rounders but has been out of form lately. Shakib bowled brilliantly, picking up a wicket for just 20 runs.