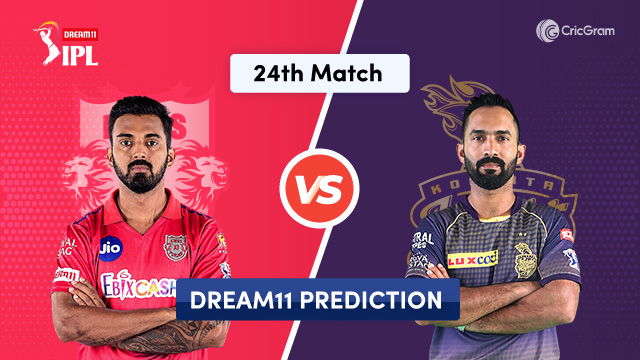 The chance of Kings XI qualifying is looking slim this season as they are currently at the bottom of the points table with 1 win and 5 losses and a total of 2 points.

KL Rahul and Mayank Agarwal have looked in good form this season and have been performing for Kings XI from the top. Except for Nicholas Pooran, no other batsmen have been able to score consistently, which has been one of the main reasons they lose matches.

In the last two matches, even their bowling has appeared to struggle a bit in controlling the flow of runs and has not regularly picked up wickets. Their main bowlers Shami and Cottrell, have gone for runs, but the young lad Ravi Bishnoi performed well in the previous match picking up 3 wickets.

Maxwell hasn’t been able to perform well even in a single match, and there are talks that Gayle will be replacing him in the future matches. If Punjab wants to qualify for playoffs, then they should win every remaining game.

Kolkata Knight Riders are back to winning ways as they won the last match against CSK and are currently at the 4th position on the points table with 3 wins and 2 losses and a total of 6 points.

With Rahul Tripathi opening the innings and batting brilliantly, a good opening partnership for KKR is solved this season. They have outstanding batsmen like Nitish Rana, Eoin Morgan, and Andre Russell in the middle order. Except for Dinesh Karthik, every other batsman looks to be in good form in the middle order.

It also appears that they have sorted out their batting order, and everyone is performing their role well. Kolkata Knight Riders bowling attack also looks strong with Pat Cummins leading the pace attack of two youngsters Shivam Mavi and Nagarkoti.

Sunil Narine also performed well with the ball in the last match, and Varun Chakravarthy has again been picking up wickets consistently. Knight Riders seem to have one of the strongest bowling attacks in the current Dream11 IPL.

With KKR back into their rhythm, it looks difficult to beat this side and has all the potential to qualify for the playoffs and even win the title this year.

Average 1st Innings Score: 167 (From 7 games played at this venue so far in this season)

Average 2nd Innings Score: 152 (From 7 matches played at this venue so far in this season)

The pitch here is a balanced one between bat and ball. But batsmen will get more advantages than bowlers. It will be a Day match, so there is no dew chance, and the teams would want to bat first and post a big total and defend it.

Four out of the seven matches have been won by the team batting first so far this season.

Skipper Rahul opens the innings for the team. He can play the shots right from the start of the inning and has two IPL hundreds to his name. Rahul scored only 11 runs in the last match. He is very good Captain/Vice-captain choice in KXIP vs KKR Dream11 Team.

He is a decent striker of the ball and plays according to the situation of the match. Agarwal scored only 9 runs in the last game.

He is the most destructive batsman in the history of IPL and can cause havoc if he gets going. Gayle might play this match against KKR.

Shami is one of the experienced bowlers for KXIP. He bowls at a good pace and is good at controlling runs in the death overs. In the last match, he was a little expensive but managed to pick up 1 wicket.

He is a young right-arm leg break bowler and has impressed everyone with his performance. Bishnoi bowled brilliantly in the last match, picking up 3 wickets.

He is a left-arm fast bowler and is known for his pace and bounce. Cottrell was a little expensive in the last match and also went wicketless.

A Right-arm off-break bowler played only one match so far this season in Dream11 IPL 2020.

He is a left-arm fast bowler and looked impressive in his first match by picking up 2 wickets.

He is a young right-handed batsman and has the talent of playing big innings. S Gill opens the innings and scored only 11 runs in the last match.

He is a right-handed batsman and opened the innings for KKR in the last match. Tripathi batted brilliantly, scoring 81 runs from just 51 balls.

He is an allrounder and is equally good with both bat and ball. In the last match, he scored 2 runs and picked up 1 wicket. Andre Russell is also a very good Captain choice in KXIP vs KOL Dream11 Team.

He is a left-handed batsman and provides stability in the middle order. In the last match, Morgan scored only 7 runs.

He is a right-arm off-spin bowler and is good at controlling the flow of runs and consistently picks up wickets. Narine scored 17 runs and also managed to pick up a wicket in the last match.

He is a left-handed batsman and generally bats at NO.3. Rana scored only 9 runs in the last match.

He is a right-arm leg-break bowler and has been consistently picking up wickets. In the last match, Varun managed to pick up a wicket.

He is a young right-arm fast bowler and bowls at a perfect pace. Mavi was a little expensive but managed to pick up a wicket in the last match.

He is a young right-arm fast bowler and can also hit some big shots down the order and is also a brilliant fielder. Nagarkoti bowled well, picking up 1 wicket in the last match.