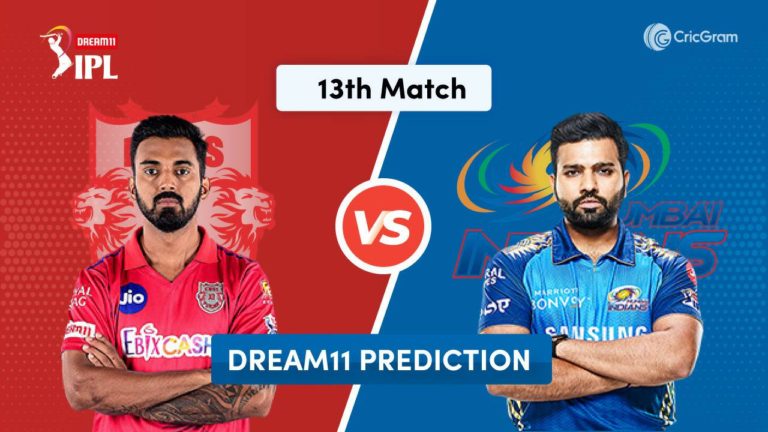 Kings XI have performed decently so far as they are currently at 4th position on the points table with 1 win and 2 losses and a total of 2 points. In the last match, they were put to bat first and had a perfect start as Mayank Agarwal 106 runs, and KL Rahul 69 runs added 183 runs to the 1st wicket.

After that, Nicholas Pooran 25 runs, and Maxwell 13 runs helped the team post 223 runs in 20 overs for the loss of 2 wickets.

With 223 runs to defend, KXIP picked up the 1st wicket in the 3rd over. But after that, they gave away a lot of runs and were not able to pick up wickets at regular intervals. In the end, they gave away 30 runs in an over, and as a result, they lost the match by 4 wickets.

Mumbai Indians have also played decently so far as they are currently at the 5th position on the points table with 1 win and 2 losses and a total of 2 points. In the last match, they decided to bowl first and had a bad start as they gave away 59 runs in powerplay without any wicket.

They picked up the 1st wicket in the 9th over after 81 runs and picked up 2nd wicket in the 13th over, but in the death overs, they bowled very severely, and as a result, the opposition scored a total of 201 runs for 3 wickets in 20 overs. Boult picked up 2 wickets, and Rahul Chahar picked up 1 wicket.

With 202 runs to chase, they had a bad start as they lost the wickets of Rohit Sharma 8 runs, and Quinton de Kock 14 runs and scored only 35 runs in the powerplay. They lost Suryakumar Yadav 0 runs and Hardik Pandya 15 runs and were 78 runs for 4 wickets.

But after that, Ishan Kishan 99 runs from 58 balls, and Kieron Pollard 60* runs from 24 balls batted exceptionally well and leveled the scores by scoring 201 runs in 20 overs.

The match went into super over, and they scored 7 runs, which were comfortably chased by the opposition, and as a result, Mumbai Indians lost the game.

Average 1st Innings Score: 165 (From 4 games played at this venue so far in this season)

Average 2nd Innings Score: 151 (From 4 matches played at this venue so far in this season)

The pitch here is a balanced one between bat and ball. But the spinners and medium pace bowlers will play a crucial role in picking up the wickets.

The team winning the toss here would want to bowl first because of the dew factor in the 2nd innings. Anything above 160 would be considered to be a good and fighting total.

Two out of the four matches have been won by the team batting first so far this season.

The Weather will be hot, around 35 degrees, and there is no chance of rain.

Skipper Rahul opens the innings for the team. He can play the shots right from the start of the inning and has two IPL hundreds to his name. Rahul played well, scoring 69 runs from 54 balls. He is very good for Captain choice of KXIP vs MI Dream11 Team.

He is a decent striker of the ball and plays according to the situation of the match. Agarwal batted brilliantly, scoring 106 runs from just 50 balls in the last game.

Shami is one of the experienced bowlers for KXIP. He bowls at a good pace and is good at controlling runs in the death overs. In the last match, he was very expensive but managed to pick up 3 wickets.

He is a left-arm fast bowler and is known for his pace and bounce. Cottrell was very expensive in the last match and picked up the only 1 wicket.

He is a young right-arm leg break bowler and has impressed everyone with his performance. Bishnoi went wicketless in the last match.

Maxwell is an allrounder but is mostly known for his batting skills. He has a strike rate of over 160 in IPL, and if required, he can bowl a few overs of spin. In the last match, he scored only 13 runs and went wicketless.

He is a right-arm leg-break bowler and bowled well in the last match picking up 1 wicket.

He is the most destructive batsman in the history of IPL. Gayle did not play in the last match.

Skipper Rohit Sharma is a destructive batsman and generally opens the inning for MI. He scored only 8 runs in the last match. Rohit Sharma is also a very good choice for KXIP vs MI Fantasy Team.

He is the wicket-keeper batsman for the team and generally opens along with Rohit. Quinton scored only 14 runs in the last match.

Boult is very dangerous and one of the top bowlers across the world. He is a left-arm bowler who can swing the ball early in the inning and controls the flow of runs in death overs. Boult bowled brilliantly in the last match, picking up two wickets.

He generally bats at NO.3 in the team. Surya was out for a duck in the last match.

He is one of the best bowlers in the world. Bumrah was a little expensive in the last match and also went wicketless.

He is a match-winning allrounder and has performed for the team with both bat and ball. Pollard batted brilliantly in the last match scoring 60* runs from just 24 balls.

He is one of the top allrounders in India. Hardik Pandya batted decently, scoring 15 runs and did not bowl in the last match.

He is a right-arm leg-break bowler and has been consistently picking up wickets this season. Chahar picked up 1 wicket in the last match.

He is a right-arm fast bowler and has made his debut this season. Pattinson was very expensive in the last match and also went wicketless.

He is a left-handed batsman and bats in the middle order. Ishan batted brilliantly, scoring 99 runs from just 58 balls in his 1st match.

We will update our final Dream11 Team on Telegram ⇒ JOIN NOW.