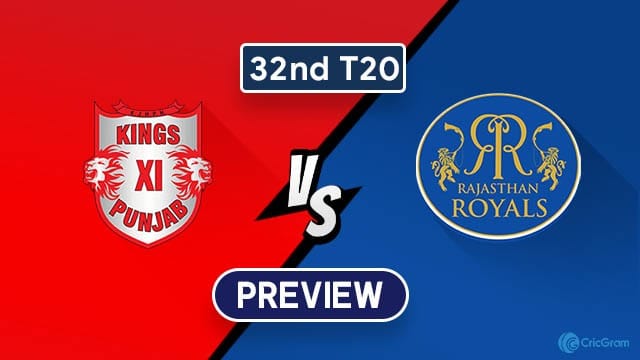 The 32nd match of Indian Premier League 2019 will be played between Kings XI Punjab and Rajasthan Royals. We are covering KXIP vs RR Dream11 Team Prediction, Preview and Probable Playing XI for the T20 match. The match is to be played at Punjab Cricket Association IS Bindra Stadium in Mohali.

Kings XI Punjab is having a mixed run in IPL’19 and have lost two consecutive matches. They are fifth on the points table with four wins and four losses. They lost their last encounter to RCB by 8 wickets. Batting first, Chris Gayle single-handedly took his team to a total of 173 runs with his brilliant knock of 99* runs in 64 balls. Defending the target, Spin duo of Ravichandran and Murugan Ashwin bowled tight lengths to increase the run rate/over but pacers failed to restrict RCB leading to the easy chase of the target. Ravi Ashwin and Shami took one scalp each in losing cause for their team. KXIP will be determined to defeat Royals at Mohali and get momentum on their side.

Rajasthan Royals are situated second last on the points table with just two victories in seven encounters. They won their last match against Mumbai Indians at Wankhede by 4 wickets. Bowling first, Jofra Archer continued his lethal form taking three-wicket haul to restrict MI at 187. Chasing the target, Top order of Royals came good with Jos Buttler scoring 89 runs in just 43 balls while Rahane and Samson also played handy knocks of 37 and 31 respectively to successfully chase the target. Rajasthan Royals will be determined to improve their standing in points table by defeating Punjab and will expect a unison effort from all players.

A good match can be expected between both teams.

There is a high chance of rain to disturb match proceedings.

Hardus Viljoen did not play the last match due to illness. If fit, He will replace Andrew Tye. Mujeeb can also get a game if the pitch is conducive to spinners.

Anyone among Nicholas Pooran and David Miller can play. Chances of Pooran are more as he did not get a chance to bat in the last match.

Chris Gayle and KL Rahul are likely to open the innings. Mayank Agarwal, Sarfaraz Khan, N Pooran and Mandeep Singh will follow them.

Ravi Ashwin and Sam Curran will play the role of an allrounder.

Ravichandran Ashwin and Murugan Ashwin will lead the spin attack while Hardus Viljoen/Tye, Sam Curran and M Shami will be the key pacers.

Krishnappa Gowtham is in poor form and can be replaced by Riyan Parag or Mahipal Lomror.

Ben Stokes did not play the last match due to a hip injury. If fit, He will replace Liam Livingstone. Ashton Turner can also get a chance if Stokes fails to pass a fitness test.

Ajinkya Rahane and Jos Buttler will open the innings. Sanju Samson, Steve Smith and Rahul Tripathi will follow them.

Jofra Archer and S Gopal can also do big hitting.

Jofra Archer and Dhawal Kulkarni will lead the pace attack along with J Unadkat while Shreyas Gopal will be the key spinner.

If you liked KXIP vs RR Dream11 prediction, then follow us on Telegram for Latest Cricket News and Grand League teams.