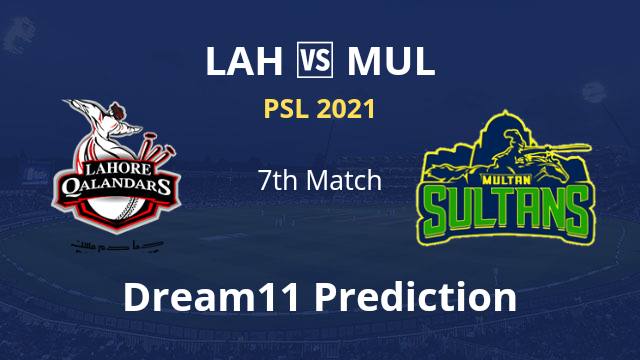 Hello and welcome to our LAH vs MUL Dream11 Prediction, Probable Playing XI, and Fantasy Cricket Tips. Lahore Qalandars and Multan Sultans will play against each other in the 7th match of the Pakistan Super League 2021 at National Stadium, Karachi.

Qalandars have made a great start to the tournament as they have won both the matches and are currently at the top of the points table with 4 points. In the last game, they performed brilliantly and won the game by 9 wickets.

The opening batsman Fakhar Zaman has been batting well so far this season and played a brilliant knock in the last match to take his team to victory. His partner Sohail AKthar has played decently in both the games and is yet to play a big inning.

Mohammad Hafeez was unbeaten in both matches and was promoted to play at No.3 in the last game. Ben Dunk and Samit Patel are experienced players in the middle-order and will play a crucial role in the finishing duties of the innings.

The bowling department has also been doing a decent job so far. Shaheen Afridi has been the consistent wicket-taker but was expensive in the last match. Haris Rauf bowled brilliantly in the previous game picking up three wickets.

Lahore Qalandars would want to maintain their domination at the top of the points table by winning their next match against the Multan Sultans.

Sultans are struggling a bit in the initial matches of the season as they have lost both the games and are currently at the 5th position on the points table with zero points. In the last game, they put up a good performance with the bat but lost the match by 6 wickets.

Skipper Rizwan opens the innings for the Sultans and has been batting brilliantly, providing a good start. But Chris Lynn, who is known for his destructive type of batting, has not scored much in both matches.

At No.3, James Vince batted brilliantly in the last match and helped the team post a massive total. In the middle-order, Sohaib Maqsood and Rilee Rossouw have decent performances so far in a couple of games.

In the lower middle-order, Khusdil Shah hasn’t scored much so far, but Braithwaite batted well in the one match he got the chance to bat.

The bowling department of the Sultans has not been up to the mark. Shahnawaz Dhani was expensive but managed to pick up 2 wickets in the last match. Afridi and Braithwaite bowled well in the first match, picking up two wickets each but went wicketless in the previous game.

Multan Sultans would hope to win this match against the Qalandars and open their account of winning on the points table.

The pitch here is generally considered a little slow, and so was the case in the initial matches, but the last two games were high-scoring games, so we cannot precisely predict how the pitch will play.

(The chasing team has won five out of the five games played at this venue in this season.)

Hafeez is the most experienced player on the side and generally bats at No.3. He batted exceptionally well in the last match scoring 73* runs from just 33 balls.

He is a left-handed batsman and opens the innings for the Qalandars. Fakhar batted brilliantly in the last match scoring 82 * runs from 52 balls.

He is one of the top fast bowlers in Pakistan and is just 20 years old. Shaheen was expensive but managed to pick up a wicket in the last match.

He is a right-arm fast bowler and bowls consistently at more than 140kmph. Rauf bowled well in the last match, picking up three wickets.

Ben Dunk is the wicket-keeper and also a key middle-order batsman. He did not get the chance to bat in the last match.

He is an all-rounder and is equally good with both bat and ball. Wiese went wicketless in the last match.

Samit Patel didn’t bowl so far this season, but Rashid Khan won’t play in this match, so do not surprise if he bowl.

Skipper Rizwan is the wicket-keeper batsman of the team and also opens the innings. He batted well in the last match scoring 41 runs, and is currently the leading run-scorer this season.

He is a right-handed batsman and generally bats at No.3. Vince batted brilliantly in the last match and scored 84 runs from just 55 balls

He opens the innings along with Rizwan and is generally known to play big shots right from the start of the innings. Lynn has not been able to score much in both the matches so far this season.

Rossouw is a middle-order batsman and bats decently according to the situation of the match. He scored 14* runs in the last match.

He is an all-rounder and equally good with both bat and ball. Braithwaite was expensive with the ball and also went wicketless.

This veteran player bowls leg-spin and is also known for his six-hitting abilities down the order. Afridi went wicketless in the last match.

He is a Left-arm fast-medium bowler. Tanvir is yet to pick up a wicket this season.

He is a 22-year-old right-arm medium-fast bowler. Dhani was expensive in the last match but managed to pick up two wickets.

The final Dream11 team will be updated on Cricgram Telegram⇒ Subscribe Now.