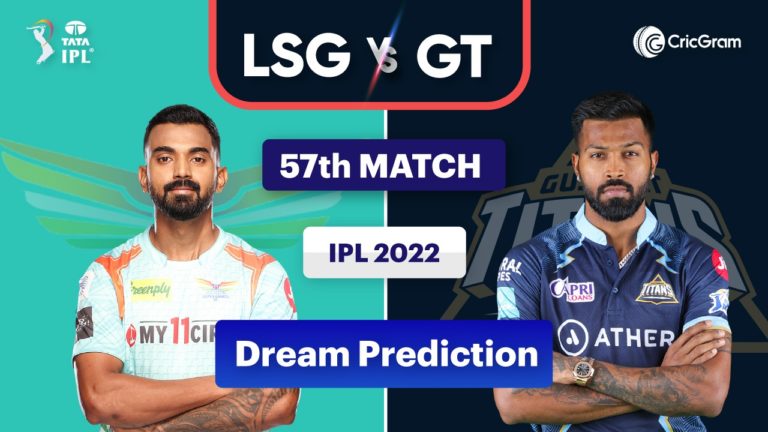 Lucknow Super Giants vs Gujarat Titans will play in the 57th match of the IPL 2022 at the MCA Stadium, Pune.

LSG has almost qualified for the playoffs and a win in this game will seal their position in the top 2. They comfortably won their last game against KKR by 75 runs.

With the ball, all their bowlers were outstanding and bowled out the Knight Riders for just 101. Avesh Khan and Jason Holder bowled brilliantly and picked up 3 wickets each.

LSG will look to play freely in this game without any pressure.

GT have lost two back-to-back games but have played good cricket in the tournament so far. They lost their last game against Mumbai Indians by 5 runs. Gujarat Titans placed 2nd on the IPL 2022 points table.

Opting to bowl first, their bowlers were expensive in the powerplay but came back well in the middle overs. Lockie Ferguson and Rashid Khan bowled very well and picked up 1 and 2 wickets respectively.

With the bat, they batted very well but fell short by 6 runs in the end. Shubman Gill and Wriddhiman Saha gave them a perfect start and scored 55 and 52 runs. Hardik Pandya also batted decently in the middle-order and scored 24 runs.

GT will look to win this game and get the winning momentum back.

The pitch at Pune is expected to be a good batting wicket but bowlers can also get good help initially. Dew can also be factor later in the night. The last 5 games have been won by the team batting first.

The live streaming of Lucknow Super Giants vs Gujarat Titans, 57th match of IPL 2022 will be available on Hotstar app and Star Sports Network.

You can also catch the live commentary, scorecard, and latest updates of the Indian Premier League 2022 match between LSG vs GT on IPLT20.com.

LKN vs GT Head to Head

He needs no introduction and is one the best batsman in the competition. Rahul scored was unfortunate in the last game and was runout for 0 but can is still an excellent choice for C and VC in LKN vs GT Dream11 Team.

Q de Kock is also a very talented player and will also do the keeping duties. He batted brilliantly in the last game and scored 50 runs.

He is a world class all-rounder. Holder bowled very well in the last game and picked up 3 wickets and is another solid option for C and VC.

He is their main bowler in this season. Avesh Khan also bowled very well in the last game and picked up 16 wickets.

Hooda will bat at 3. He also batted very well in the last game and scored 41 runs.

He will contribute with both bat and ball and is in very good form. Pandya did not bowl in the last game but scored 25 runs with the bat.

He is one the best spinners in the competition. Ravi Bishnoi bowled decently in the last game and picked up 1 wicket.

He is the skipper of the team and will bat in the middle-order. Pandya batted decently in the last game and scored 24 runs and is an excellent choice for C and VC in LKN vs GT Dream11 Prediction.

S Gill will open the innings and is one of their best batsman. He played very well in the last game and scored 52 runs and is another solid option for C and VC.

He is one of the best bowler in the competition. Rashid bowled very well in the last game and picked up two wickets.

He will lead the bowling attack and is one of the best pacers. Shami went wicketless in the last game and was expensive.

He is a very talented fast bowler and is known for his pace. Ferguson picked up one wicket in the last game.

He will do the finishing duties for the team and is in brilliant form. Miller scored 19* runs in the last game.

He will contribute with both bat and ball and is in very good form. K Pandya did not bowl in the last game but scored 25 runs with the bat.

Currently, Yuzvendra Chahal is the purple cap holder. He took 22 wickets in 11 matches so far in Tata IPL.