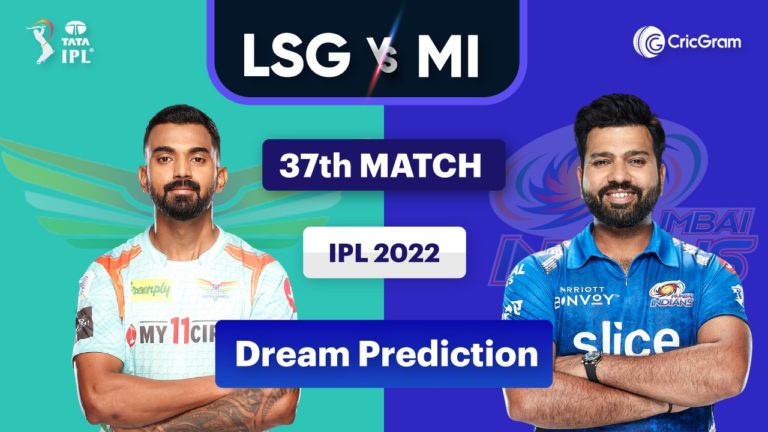 LKN vs MI Dream11 Prediction, Probable Playing 11, and Fantasy Cricket Tips. Lucknow Super Giants vs Mumbai Indians will play in the 37th match of the IPL 2022 at the Wankhede Stadium, Mumbai.

They are placed 5th on the IPL 2022 Points Table with 4 wins and 3 losses from their 7 games so far. They had face disappointment in their last outing against RCB and lost the game by 18 runs.

Opting to bowl first, LSG were brilliant in the powerplay but were unable to pick wickets in the death. Jason Holder and Dushmantha Chameera were the pick from the bowlers and picked up 2 wickets each.

With the bat, Lucknow Super Giants had a decent powerplay but their middle-order failed completely. Krunal Pandya and Marcus Stoinis were the two batters who looked good and scored 42 and 24 runs respectively.

They are still well placed on the points table and will look for a easy win against MI in this season.

MI are still on their losing streak and have lost all their 7 games so far and are almost out of the tournament. Mumbai Indians played very well in the last game against CSK but had to face defeat in the end.

Batting first, both their openers are out of form and were dismissed for ducks. In the middle-order, Surya Kumar Yadav and Tilak Varma played good knocks of 31 and 53* respectively and helped their team post a respectable total.

MI have nothing to lose in their last 7 games and will look to play as freely as possible in this game.

The last 2 games was high scoring on this ground. A similar pitch can be expected in this game as well and we can expect a high scoring contest. Winning the toss and bowl first is the trend so far this season.

The live streaming of Lucknow Super Giants vs Mumbai Indians, 37th match of IPL 2022 will be available on Hotstar app and Star Sports Network.

You can also catch the live commentary, scorecard, and latest updates of the Indian Premier League 2022 match between LSG vs MI on IPLT20.com.

LSG vs MI Head to Head

He needs no introduction and is one the best batsman in the competition. Rahul scored 30 runs in the last game and scored a 100 against MI in their last H2H and is an excellent option for C and VC in LKN vs MI Dream11 Prediction.

Q de Kock is also a very talented player and will also do the keeping duties. He scored only 3 runs in the last game but is a must-have pick in LSG vs MI Dream11 fantasy team.

He is a world class all-rounder. Holder bowled very well in the last game and picked up 2 wickets and also scored 16 runs with the bat.

He is their main bowler in this season. Avesh Khan went wicketless in the last game but will bowl in death.

He will do the finishing duties with the bat and can also bowl few overs. Stoinis looked very good in the last game and scored 24 runs.

Hooda will bat in the middle-order. He scored only 13 runs in the last game but can be a trump card pick in this game.

He is one the best spinners in the competition. Ravi Bishnoi went wicketless in the last game and was also expensive.

He will open the innings along with Rohit Sharma. Ishan is not looking in good form and was dismissed for duck in the last game but is still an excellent choice for C and VC in LKN vs MI Dream11 Team.

He is the skipper of the team. Rohit is also in terrible form and will be desperate to score runs.

He is one of their best batsmen and will bat at 4. Yadav is in excellent form and scored 32 runs in the last game.

Bumrah also needs no introduction and will be their best bowler. Batsmen are not taking much risk against him and is being economical but is not able to pick up wickets.

He is an exciting talent to watch out for. Brevis scored only 4 runs in the last game but is a quality player.

Varma will bat in the middle order and is in excellent form. He played very well in the last game and scored 51* runs.

He will contribute with both bat and ball. Sams bowled very well in the last game and picked up 4 wickets.

He will bat in the middle-order and will also bowl 2-4 overs in the middle overs and can be an excellent trump card in this game.

Currently, Yuzvendra Chahal is the purple cap hodler. He took 18 wickets in 7 matches so far in Tata IPL.