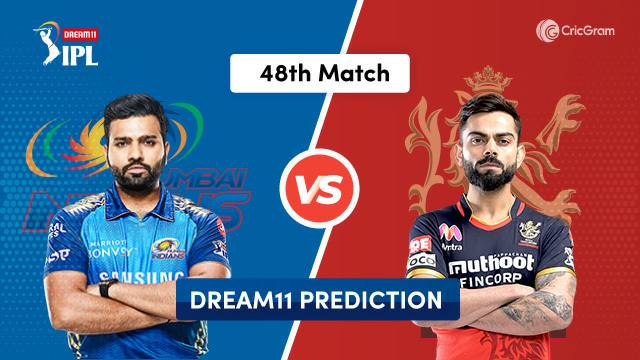 Mumbai Indians have been playing brilliantly as they are currently at the top of the points table with 7 wins and four losses and a total of 14 points.

Rohit Sharma’s injury has been a big concern for the team as he is one of the top batsmen in the world and the captain for Mumbai Indians. He has also been excluded from all Indian team formats for Australia’s tour, which has raised doubts about whether he will continue to play IPL.

Quinton de Kock has appeared to be in the right touch and is scoring well from the top for MI. Ishan Kishan has been doing a great job in his newly assigned role as an opener, and Surya Kumar Yadav has been brilliant as always, batting well at No.3.

Hardik Pandya batted brilliantly in the last match and finished the batting for MI at a perfect score, and Kieron Pollard has also been superb with the bat this season. In the lower middle-order, Krunal Pandya has an excellent bat and has also been decent with the ball picking up wickets when required.

Another spinner Rahul Chahar has been one of the best spinners this season as he has been consistently picking up wickets in the middle overs. The bowling trio Bumrah, Boult, and Pattinson have been extraordinary this season as each of them has been performing well in every match and have picked up wickets.

Mumbai Indians need to win one more match to qualify for playoffs, and with the way they have been playing, it looks an easy road for them.

RCB has also performed well so far in this season as they are currently at the 3rd position on the points table with seven wins and four losses and a total of 14 points.

The Royal Challengers, after two back-to-back wins, lost very severely against CSK in the last match. The woes for Aaron Finch continue as he got out early in the previous game also. Devdutt Padikkal has been batting decently, but his approach has been prolonged, and thus, the team is not getting the start they would have expected.

In the middle overs. Virat Kohli has played well by rotating strike, and the running between the wickets has been brilliant. Still, he has not been hitting enough boundaries, which is putting pressure on the upcoming batsmen.

ABD has appeared to be in perfect form this season and has even won 2-3 games for RCB with his batting. Washington Sundar has been bowling well in the powerplay and has also picked up crucial wickets.

Chris Morris has been at his best so far, picking up wickets in almost all the matches he played this season and also batted brilliantly in one of the games. Yuzvendar Chahal has been their go-to bowler to pick up wickets in the middle overs, and he is delivered every time.

Mohammad Siraj has either been brilliant or has been just smashed all over the park for runs. Navdeep Saini has been bowling at a perfect pace and troubling the batsmen with his speed, but he has struggled to pick up wickets. Isuru Udana has been brilliant with the ball in the death overs.

Royal Challengers also need to win one more match to qualify for playoffs, but at the same time, if they lose all their remaining games, they might be out of the tournament.

Average 1st Innings Score: 163 (From 16 games played at this venue so far in this season)

Average 2nd Innings Score: 149 (From 16 matches played at this venue so far in this season)

The pitch has appeared to be slowed down, and there were low scoring matches, but the last couple of matches have been high scoring games. It is difficult to predict how the pitch will behave.

Eight out of the sixteen matches have been won by the team batting first so far this season, out of which super over decided one game.

MI: Won 5 out of 7 games at this venue so far in this season.

BLR: Won 2 out of 2 games at this venue so far in this season.

He is the wicket-keeper batsman for the team and generally opens along with Rohit. Quinton scored only 6 runs in the last match.

He generally bats at NO.3 in the team. Surya batted well, scoring 40 runs from 26 balls in the last match.

He is one of the best bowlers in the world. Bumrah went wicketless in the previous match.

Boult is very dangerous and one of the top bowlers across the world. He is a left-arm bowler who can swing the ball early in the innings. Boult was expensive in the last match and also went wicketless.

He is a left-handed batsman and has been opening the innings for MI in the absence of Rohit Sharma. Ishan scored 37 runs in the last match.

He is a right-arm fast bowler and has made his debut this season. Pattinson was very expensive but managed to pick up 2 wickets in the last match.

He is a match-winning allrounder and has performed for the team with both bat and ball. Pollard scored only 6 runs and also went wicketless in the last match.

He is a right-arm leg-break bowler and has been consistently picking up wickets this season. Chahar was very expensive and also went wicketless in the last match.

He is one of the top allrounders in India. Hardik Pandya batted brilliantly, scoring 60* runs from just 21 balls in the last match.

He is a bowling allrounder and has troubled many batsmen with his left-arm orthodox style. Krunal was expensive and went wicketless in the last match.

One of the best batsmen in the world, skipper Virat will be playing at NO.3 for RCB. He is the highest run-getter so far in the history of IPL and has five centuries to his name. Kohli scored 50 runs from 43 balls in the last match.

This 20-year-old left-handed batsman has got a lot of talent. Padikkal scored 22 runs in the last match.

Mr.360, who can play shots to any corner of the ground and will be important in the middle order. AB scored 39 runs from 36 balls in the last match.

He is an allrounder who is equally good with both bat and ball. Morris will play a crucial role in the lower middle order with the bat. He scored 2 runs and managed to pick up 1 wicket in the last match.

He is a right-arm leg-spin bowler. Chahal is an excellent bowler in the T20 format and troubles the batsmen with his wrong-uns. He bowled well in the last match, picking up one wicket for just 21 runs in his 4 overs.

Finch is playing for RCB for the 1st time in IPL. He opens the innings for them and scored 15 runs from 11 balls in the last match.

He is a bowling allrounder and can play some big shots down the order. Sundar scored 5 runs and went wicketless in the last match.

He is a right-arm fast bowler and has been bowling brilliantly this season. In the last match, Siraj was very expensive and also went wicketless.

He is a left-arm medium-fast bowler and is mostly known for his slower deliveries. Udana did not play in the last match.