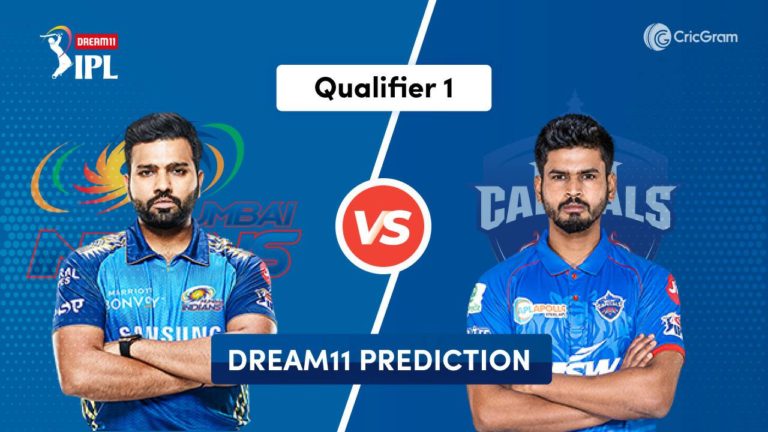 Mumbai Indians have played brilliantly, finished the league stage at the top of the points table with nine wins and five losses, and 18 points.

Rohit Sharma has recovered from injury and has played the previous match, but he did not score much. His opening partner Quinton de Kock has been batting very well, and scoring runs from the top. At No.3, Surya Kumar Yadav has been in excellent form from the past few matches, and scoring runs consistently.

The youngster Ishan Kishan has appeared to be more comfortable batting up the order than in the middle-order. Hardik Pandya has been rested for the past few matches, but he will be playing the Qualifier, and he is excellent in the role of a finisher.

Kieron Pollard and Krunal Pandya have also appeared to be in perfect form this season with the bat and have hit big sixes down the order in most matches. The spin duo Rahul Chahar and Krunal Pandya are doing a decent job of picking up wickets and controlling the flow of runs in the middle overs.

The bowling department has been brilliant with players like Bumrah and Boult, who are amongst the top wicket-takers of this season. They have been the significant reason for Mumbai Indians’ success so far this season.

They were rested for the last match, but they will be back into the playoffs team. James Pattinson has also done a decent job picking up wickets, but he has been expensive in most of the matches.

Mumbai Indians have played so far this season; if they continue to play the same way, winning the Qualifier must be a cakewalk.

After losing four consecutive matches, Delhi Capitals finally managed to win their last league stage match. As a result, they ended up at the 2nd position on the points table with eight wins and six losses and a total of 16 points.

Skipper Shreyas and the explosive wicket-keeper batsman have been silent as they haven’t played big shots from the past few matches. They need to get back to form if they want to win against a team like MI.

Marcus Stoinis played brilliantly at the start of the innings, but he has struggled with both bat and ball in the last few matches, which has been a big concern for the team. Axar Patel has done a decent job as an allrounder, and he needs to maintain the same consistency.

The spin department lead by Ravichandran Ashwin has been decent so far, but in some of the matches, he has been very expensive. Their main strength is that the fast bowling department had gone for many runs in the last few games, but they appeared to be back in form in the previous match.

Kagiso Rabada went wicketless for two consecutive matches bowled well in the last game, picking up two wickets. He was accompanied by another speedster Anrich Nortje who bowled brilliantly, picking up three wickets.

If Delhi Capitals wants to win Qualifier 1, their middle-order batsmen and allrounders need to give their best performance.

Average 1st Innings Score: 170 (From 24 games played at this venue so far in this season)

Average 2nd Innings Score: 149 (From 24 matches played at this venue so far in this season)

So far, the results have been favorable for the team batting first because the pitch tends to slow down in the 2nd innings, and it becomes difficult to time the ball. But from the past few matches, the chasing team have been winning at this venue because of the dew factor.

Anything over 160-170 in the 1st innings can be considered to be a fighting total. A total of 24 matches have been played here so far in Dream11 IPL 2020. The team batting first has won 15 games, out of which super overs decided three games.

Skipper Rohit Sharma is a destructive batsman and generally opens the inning for MI. He scored only 4 runs in the last match.

He is the wicket-keeper batsman for the team and generally opens along with Rohit. Quinton scored 25 runs from 13 balls in the last match.

He generally bats at NO.3 in the team. Surya scored 36 runs in the last match.

He is one of the best bowlers in the world. Bumrah was rested in the last match.

Boult is very dangerous and one of the top bowlers across the world. He is a left-arm bowler who can swing the ball early in the innings. Boult was rested for the previous match.

He is a left-handed batsman and has been opening the innings for MI in the absence of Rohit Sharma. Ishan batted decently, scoring 33 runs in the last match.

He is a bowling allrounder and can play big shots down the order. Coulter-Nile went wicketless in the last match.

He is a right-arm fast bowler and has made his debut this season. Pattinson went wicketless in the last match.

He is a right-arm leg-break bowler and has been consistently picking up wickets this season. Chahar went wicketless in the last match.

He is a match-winning allrounder and has performed for the team with both bat and ball. Pollard batted brilliantly, scoring 41 runs from 25 balls in the last match.

He is one of the top allrounders in India. Hardik Pandya was rested for the last match.

Shikhar Dhawan opens the innings for DC and has two IPL hundreds to his name. He batted well, 54 runs from 41 balls in the last match.

He is a right-arm fast bowler and troubles the batsmen with his pace and bounce. Rabada picked up two wickets in the last match and is the leading wicket-taker in this tournament.

He is a right handed-batsman. A Rahane played 6 matches so far this season and scored 111 runs.

Skipper Shreyas generally bats according to the situation of the match. He is capable of playing big shots also. In the last game, Iyer scored only seven runs.

He is a right-arm fast bowler and hurries the batsmen with his pace. Nortje bowled well, picking up three wickets in the last match.

He is the wicket-keeper batsman for DC and can hit some big sixes if he gets going. Rishabh Pant scored 8* runs in the last match.

He is Left-arm fast-medium bowler and right handed-batsman. Daniel Sams played 2 matches so far this season and didn’t took any wickets.

He is a batting allrounder and can bowl a few overs of medium pace if required. In the last match, Stoinis scored 10* runs.

He is a Left-arm orthodox bowler and can also hit some big shots. Axar went wicketless in the last match.

He is a right-arm off-break bowler and can also be handy with the bat down the order. Ashwin bowled well, picking up one wicket for just 18 runs in the last match.

This young right-handed batsman opens the innings along-side Shikhar Dhawan. Shaw is an explosive batsman and tends to play big shots right from the start. He scored only 9 runs in the last match.