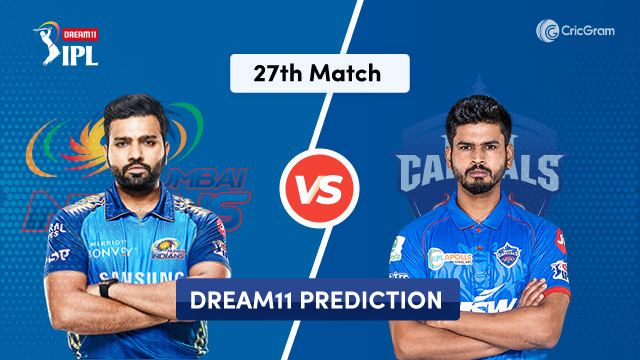 Mumbai Indians are having a great time as they are currently at the 2nd position on the points table with 4 wins and 2 losses and a total of 8 points.

Rohit Sharma and de Kock have been performing well at the top, followed by Suryakumar Yadav at NO.3, who played brilliantly in the last innings. Their middle order looks very strong with players like Ishan Kishan, Hardik Pandya, Kieron Pollard, and Krunal Pandya.

These players have performed well in every match and have played perfect innings in death overs. Moreover, MI has the highest batting run rate in death overs so far in this Dream11 IPL.

Jasprit Bumrah, Trent Boult, and James Pattinson have been bowling brilliantly and picking up wickets consistently in every match. They have got good support from the spinners Rahul Chahar and Krunal Pandya, who have managed to control the flow of runs and pick up wickets.

Finally, we can say that, although DC has been performing well so far, they would still need to put their maximum effort to beat MI in the next match.

The Delhi Capitals have been performing brilliantly so far as they are currently at the 1st position on the points table with 5 wins and one loss and a total of 10 points.

The Capitals are looking unstoppable now as they appear to be an extreme side. In their last match in Sharjah, even though the batsmen didn’t post a massive total, their bowling attack performed superbly and defended the total in such a small ground. Shows how good they have been performing as a team.

Their only concern would be Shikhar Dhawan, who has not been able to play a big inning so far and has got out early in most of the matches. All the other batsmen like Prithvi Shaw, Shreyas Iyer, Rishab Pant, and Shimron Hetmyer have performed well in one or the other Matches.

All-rounders Marcus Stoinis and Axar Patel have been performing brilliantly in both batting and bowling. Ravichandran has been an excellent asset to the team this year as he has been picking up wickets consistently.

The pace duo Kagiso Rabada and Anrich Nortje are just rattling the opposition wickets. They have got good support from the other pace bowler Harshal Patel who has been performing decently.

If DC keeps performing the way they have been so far in this season, then there is no doubt that they will be strong contenders for the title this year.

Average 1st Innings Score: 167 (From 7 games played at this venue so far in this season)

Average 2nd Innings Score: 152 (From 7 matches played at this venue so far in this season)

Four out of the seven matches have been won by the team batting first so far this season.

Skipper Rohit Sharma is a destructive batsman and generally opens the inning for MI. He scored 35 runs in the last match. Rohit Sharma is very good Captain choice in MI vs DC Dream11 Team.

He is the wicket-keeper batsman for the team and generally opens along with Rohit. Quinton scored 23 runs in the last match.

He is one of the best bowlers in the world. Bumrah bowled brilliantly in the last match, picking up 4 wickets for just 20 runs in the previous match.

Boult is very dangerous and one of the top bowlers across the world. He is a left-arm bowler who can swing the ball early in the inning and controls the flow of runs in death overs. Boult bowled brilliantly, picking up 2 wickets in the last match.

He is a match-winning allrounder and has performed for the team with both bat and ball. Pollard did not get to bat in the last match but managed to pick up a wicket.

He generally bats at NO.3 in the team. Surya batted brilliantly, scoring 79* runs from 47 balls in the last match.

He is a right-arm fast bowler and has made his debut this season. Pattinson bowled well in the last match, picking up 2 wickets.

He is one of the top allrounders in India. Hardik Pandya scored 30* runs from 19 balls in the last match.

He is a right-arm leg-break bowler and has been consistently picking up wickets this season. Chahar picked up 1 wicket in the last match.

He is a bowling allrounder and has troubled many batsmen with his left-arm orthodox style. Krunal scored 12 runs but went wicketless in the last match.

He is a left-handed batsman and bats in the middle order. Ishan was out for a duck in the last match.

Skipper Shreyas generally bats according to the situation of the match. He is capable of playing big shots also. In the last game, Iyer scored 22 runs.

He is a right-arm fast bowler and troubles the batsmen with his pace and bounce. Rabada bowled brilliantly in the last match, picking up 3 wickets and is currently the leading wicket-taker in the tournament.

This young right-handed batsman opens the innings along-side Shikhar Dhawan. Shaw is an explosive batsman and tends to play big shots right from the start. He scored 19 runs in the last match.

He is the wicket-keeper batsman for DC. Rishabh Pant can cause havoc if he gets going and can play the role of finisher very well. He only 5 runs in the last match.

Shikhar Dhawan opens the innings for DC and is a good striker of the ball. He scored only 5 runs in the last match.

He is a batting allrounder and can bowl a few overs of medium pace if required. In the last match, he performed brilliantly, scoring 39 runs and also picked up 2 wickets.

He is a right-arm fast bowler and hurries the batsmen with his pace. In the last match, Nortje bowled well by picking up 1 wicket.

He is a right-arm off-break bowler and can also be handy with the bat down the order. Ashwin bowled well, picking up 2 wickets in the last match.

He is a Left-arm orthodox bowler and can also hit some big shots. Axar batted brilliantly, scoring 17 runs from 8 balls and also picked up 1 wicket.

He is a right-arm medium-fast bowler. Harshal scored 16 runs and also bowled well in the last match picking up 1 wicket.

He is a left-handed batsman and bats in the middle order for DC. Hetmyer batted brilliantly in the last match scoring 45 runs from just 24 balls.