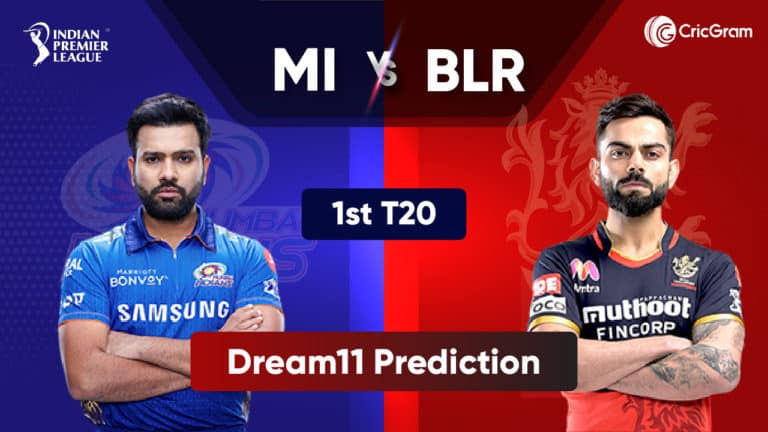 MI vs RCB Dream11 Prediction, Probable Playing XI, and Fantasy Cricket Tips of IPL 2021. Mumbai Indians and Royal Challengers Bangalore will play against each other in the 1st Match of IPL 2021 at MA Chidambaram Stadium, Chennai.

Rohit Sharma and Quinton de Kock/Chris Lynn are likely to open the innings for MI in the season’s initial matches. Rohit Sharma has appeared to be in good form. There is chance that Chris Lynn can also open. Chris Lynn scored many fifties in the recent Big Bash season.

At No.3, Surya Kumar Yadav will play the anchor’s role and play aggressively as the match progresses. The middle and lower-middle order looks solid with some big hitters like Ishan Kishan, Kieron Pollard, Hardik Pandya, and Krunal Pandya. Mumbai has a perfect batting lineup, and it will be tough for any opposition to restrict the flow of runs.

The bowling unit is also very well sorted with some big names like Jasprit Bumrah, Trent Boult, and Nathan Coulter-Nile, who can rip the opposition team’s wickets. Moreover, they have many all-rounders who bowl very well and thus reduce the pressure on the main bowlers.

On the whole, MI is a solid team, and like the last two seasons, it won’t be easy for the other teams to defeat them.

Royal Challengers Bangalore has managed to get good players before the start of every season, but they are yet to win a title. In the last season, they played brilliantly, but towards the end, their performance was not up to the mark, and they got eliminated in the Eliminator.

As Virat Kohli said earlier in the press conference, he will be opening along with Devdutt Padikkal this season. It will give them more flexibility, and the right combination will work well at the top-order. They are planning to promote AB de Villiers at No.3 to have a solid top order.

One of the significant reasons for RCB’s failure has been the lack of middle-order. Even this time, it doesn’t appear that the problem has been solved as there are not many experienced players. Maxwell and Daniel Sams are experienced players, and Azharuddeen, Sachin Baby, and KS Bharat are good strikers of the ball but haven’t played any international cricket.

The bowling unit looks decent as they have been in good form in the recent International matches. Siraj has improved a lot in his performance. Kyle Jamieson and Kane Richardson will be the foreign fast bowlers and are expected to perform well this season. The spin department will be handled by Yuzvendra Chahal and Sundar, who has been in good form.

Royal Challengers Bangalore has a decent set of players, and it is up to the management how they select the team and play accordingly this season.

The pitch here is considered to be on the slower side and mostly favors the spin bowlers. Batting is somewhat tricky as the ball doesn’t come on to the bat so quickly, and also, the fast bowlers will have success if they bowl different variations. Dew might also play an essential factor.

Skipper Rohit opens the innings for MI and can play big innings if he gets going. He has an IPL hundred to his name. Rohit is very good pick in MI vs RCB Dream11 Team IPL 2021.

He played 66 matches and scored 1959 runs. If Quinton de Kock plays then he is good to pick in RCB vs BLR Dream11 Fantasy Team.

He is a right-handed batsman and generally bats at No.3 for MI. Surya has been in the limelight for his brilliant performance in the recent T20I series.

He is also a right-handed batsman and most probably will open the innings in the first few matches. Lynn can cause havoc from the first ball of the innings.

He is a young wicketkeeper-batsman and generally bats in the middle-order. Ishan Kishan has been performing very well and also got selected in Indian cricket in the recent T20I series.

He is a right-arm fast bowler and well known for his yorkers in the death overs. Bumrah has been the most crucial fast bowler for Mi in the last few seasons.

He is an all-rounder and is equally good with both bat and ball. Hardik is well known for his big shots down the order, but he has also recovered and started bowling, which will be advantageous for MI.

Pollard is a right-handed batsman and can also bowl a few overs of medium pace. He bats at a strike rate of 150 in the middle order and does the finisher’s job very well.

He is a left-arm fast bowler and bowls at a good pace and swings the ball very well. Boult had a very well last season as he consistently picked up wickets.

He is a right-arm leg-break bowler and is good at picking up wickets. Chahar performed well in his debut series against England recently.

King Kohli is the highest run-scorer so far in the history of IPL. He has also appeared to be in great form and has scored consecutive fifties in the recent matches. Virat Kohli is very good Captain choice in MI vs RCB Dream11 Prediction.

ABD is also called Mr.360 in the world of cricket. He can smash any bowler in any corner of the ground.

He is a left-handed batsman and opens the innings for the team. Devdutt made his debut last season and impressed everyone with his performance.

He is a right-arm leg-break bowler and consistently picks up wickets. Chahal has been one of the key wicket-takers for RCB for the last 3-4 seasons.

Maxwell is a right-handed batsman who bats destructively and also bowls a few overs of spin. He has not performed to his full potential in the last two-three seasons.

Jamieson is a right-arm medium-fast bowler and can also be handy with the bat down the order. Jamieson was bought for a considerable amount of 15.50cr by RCB this season. He is yet to make a debut in IPL.

He is an all-rounder who is equally good with both bat and ball. Christian performed very well in the recently completed Big Bash league.

He is a right-arm fast bowler. Siraj has performed very well in the recent series against Australia and the tests against England and has appeared to be in perfect form.

He is a right-arm fast bowler and bowls at a good pace. Richardson controls the flow of runs very well in the death overs and also picks up wickets.