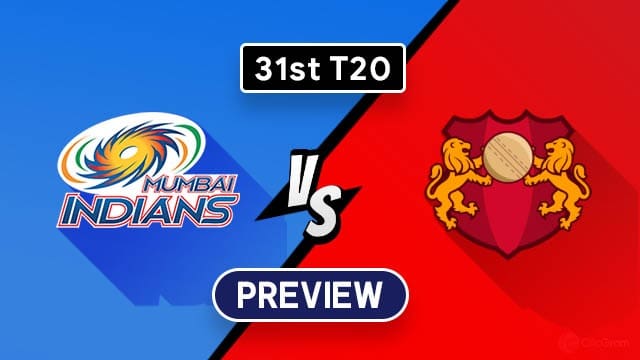 The 31st match of Indian Premier League 2019 will be played between Mumbai Indians and Royal Challengers Bangalore. We are covering MI vs RCB Dream11 Team Prediction, Preview and Probable Playing XI for the T20 match. The match is to be played at Wankhede Stadium in Mumbai.

Mumbai Indians are in a good form and are situated third on the points table with four wins and three losses. They lost their last match to Rajasthan Royals by 4 wickets. Batting first, Quinton De Kock and Rohit Sharma played brilliant knocks of 81 and 47 respectively to give a good start to the team. Another quick cameo of 28 runs in 11 balls from Hardik Pandya led them to a good total of 187. Defending the target, Krunal Pandya and Bumrah took three and two scalps each but failed to defend the total. Mumbai Indians will be determined to bounce back and give a tough challenge to Royal Challengers Bangalore.

Royal Challengers Bangalore got their first victory of the season defeating Kings XI Punjab at Mohali. A classic Virat-AB show finally ended the win drought for RCB. Bowling first, Yuzi Chahal, Moeen Ali and Navdeep Saini bowled well to restrict Punjab at 173. Chahal took two crucial scalps for his team. Chasing the target, Virat and AB de Villiers played match-winning knocks of 67 and 59* respectively to comfortably chase the target. RCB have finally found momentum and will come to all guns blazing to get another victory as they have to win all remaining seven matches to qualify for playoffs.

Alzarri Joseph is ruled out of the remainder of the season due to injury. if available Lasith Malinga will replace him otherwise Ben Cutting will play.

Rohit Sharma will open the innings along with Quinton De Kock. Suryakumar Yadav, Kieron Pollard and Ishan Kishan will follow them.

Pandya Brothers will play the role of  an allrounder.

Jasprit Bumrah will lead the pace attack along with Malinga/Cutting, Behrendorff and Hardik Pandya while Krunal Pandya and Rahul Chahar will be the key spinners.

Nathan Coulter-Nile has been ruled out due to injury and Dale Steyn replaces him but is expected to join the team on 16th April.

Mohammed Siraj has been very expensive and can be replaced by Tim Southee or Grandhomme.

Virat Kohli will open the innings along with Parthiv Patel. Ab De Villiers, M Stoinis and Moeen Ali will strengthen the middle order. Akshdeep Nath will follow them.

M Stoinis and Moeen Ali will play the role of an allrounder. Pawan Negi/Sundar can also do big hitting.

Navdeep Saini and Umesh Yadav will lead the pace attack along with Marcus Stoinis while Yuzi Chahal and Pawan Negi/Sundar will be the key spinners along with Moeen Ali.

If any player miss from playing XI, then replace him.

If you liked MI vs RCB Dream11 prediction, then follow us on Telegram for Latest Cricket News and Grand League teams.