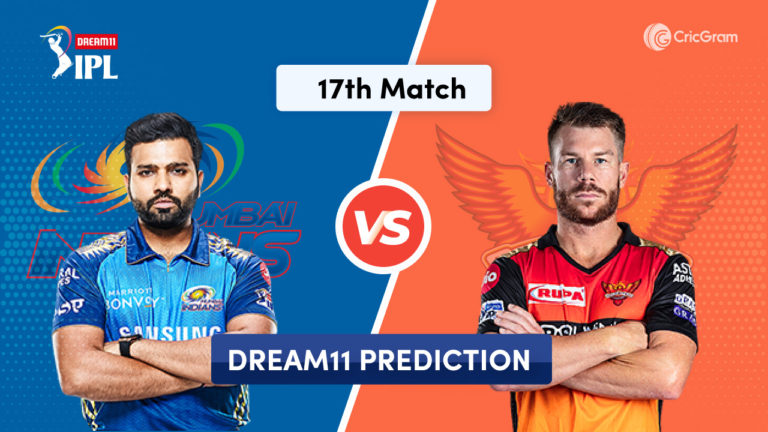 Mumbai Indians will take on Sunrisers Hyderabad in the 17th Match of Dream11 IPL 2020 at Sharjah Cricket Stadium, Sharjah. We will provide MI vs SRH Dream11 Prediction, Probable Playing XI, and Dream11 Tips.

Mumbai Indians are having a great time as they are currently at the 1st position on the points table with 2 wins and 2 losses and a total of 4 points. In the last match, they were put to bat first and had a bad start as they lost wickets of de Kock 0 runs and Suryakumar 10 runs and were 41 runs for 2 wickets in the power play.

Rohit Sharma batted brilliantly, scoring 70 runs from 45 balls along with Ishan Kishan 28 runs. In the end, MI caused havoc as Kieron Pollard 47* runs from 20 balls, and Hardik Pandya 30* runs from 11 balls smashed everything out of the park and posted a total of 191 runs in 20 overs.

With 191 runs to defend, they had a good start as they picked up 2 wickets in the power play for 41 runs. They never allowed the opposition to score runs freely and picked up wickets at regular intervals and won the match comfortably by 48 runs.

Sunrisers have performed decently so far as they are currently at 4th position on the points table with 2 wins and 2 losses and a total of 4 points. In the last game, they decided to bat first and had a bad start as they lost the wicket of Jonny Bairstow for a duck in the 1st over.

David Warner 28 runs, and Manish Pandey 29 runs batted decently for a while in the middle overs. But in the end, both the youngster Priyam Garg 51* runs from 26 balls and Abhishek Sharma 31 runs batted brilliantly and helped them post 164 runs.

With 164 runs to defend, SRH had a good start as they picked up 3 wickets for just 36 runs in the power play. After that, they couldn’t pick up many wickets but managed to control the runs. They bowled well in the death overs and won the match by 7 runs.

Natarajan bowled well, picking up 2 wickets. Bhuvneshwar and Abdul Samad managed to pick up 1 wicket each.

Average 1st Innings Score: 220 (From 2 matches played at this venue so far in this season)

Average 2nd Innings Score: 213 (From 2 matches played at this venue so far in this season)

The pitch here is perfect for batting as the ball nicely coms on to the bat, and also the boundaries are short. We have already seen two high scoring matches at this venue so far in this season.

This will be the 1st Day match to be played at Sharjah in this Dream11 IPL 2020 season. There wouldn’t be much change in the pitch in the 1st and 2nd innings as there will be no dew factor.

One of the two matches has been won by the team batting first at this venue.

Skipper Rohit Sharma is a destructive batsman and generally opens the inning for MI. He batted brilliantly, scoring 70 runs from 45 balls in the last match. Rohit Sharma is also a perfect Captain choice for MI vs SRH Dream11 Fantasy Team.

He is the wicket-keeper batsman for the team and generally opens along with Rohit. Quinton got out for a duck in the last match.

He is a match-winning allrounder and has performed for the team with both bat and ball. Pollard batted brilliantly in the last match scoring 47* runs from just 20 balls.

He generally bats at NO.3 in the team. Surya scored only 10 runs in the last match.

He is one of the top allrounders in India. Hardik Pandya batted well, scoring 30* runs from 11 balls.

He is one of the best bowlers in the world. Bumrah was a little expensive in the last match and also went wicketless.

Boult is very dangerous and one of the top bowlers across the world. He is a left-arm bowler who can swing the ball early in the inning and controls the flow of runs in death overs. Boult was a little expensive but managed to pick up 1 wicket.

He is a right-arm leg-break bowler and has been consistently picking up wickets this season. Chahar picked up 2 wickets in the last match.

He is a right-arm fast bowler and has made his debut this season. Pattinson bowled well in the last match, picking up 2 wickets.

He is a left-handed batsman and bats in the middle order. Ishan batted decently, scoring 28 runs in the last match.

Skipper Warner is one of the best batsmen in the history of IPL. He batted decently in the last match scoring 28 runs. David Warner is a perfect choice of Captain/Vice-captain in MI vs SRH Dream11 Team.

He opens the innings for SRH along with Warner and made his debut last season. Bairstow was out for a duck in the last match.

He generally bats in the middle order and is known for playing according to the match’s situation. Pandey batted decently, scoring 29 runs in the last match.

He is a right-handed batsman. Williamson was unlucky as he got run out in the last match for just 9 runs.

He is a right-arm leg spinner and is consistent in picking up wickets. Rashid is also very good at controlling the flow of runs. He went wicketless in the last match but gave away only 12 runs in his 4 overs.

He is a left-arm medium-fast bowler and is picking wickets consistently for SRH. In the last match, Natarajan managed to pick up 2 wickets.

He is a right-arm fast bowler and troubles the batsmen with his swing. Bhuvneshwar bowled well, picking up 1 wicket in the last match.

He is a young right-handed batsman and was also the U-19 Indian Cricket team captain last year. Garg batted brilliantly in the last match scoring 51* runs from just 26 balls.

He is an allrounder and equally good with both bat and ball. In the last match, he batted well, scoring 31 runs.

He is a left-arm medium-fast bowler and is known for his bouncers early in the innings. In the last match, Khaleel went wicketless.