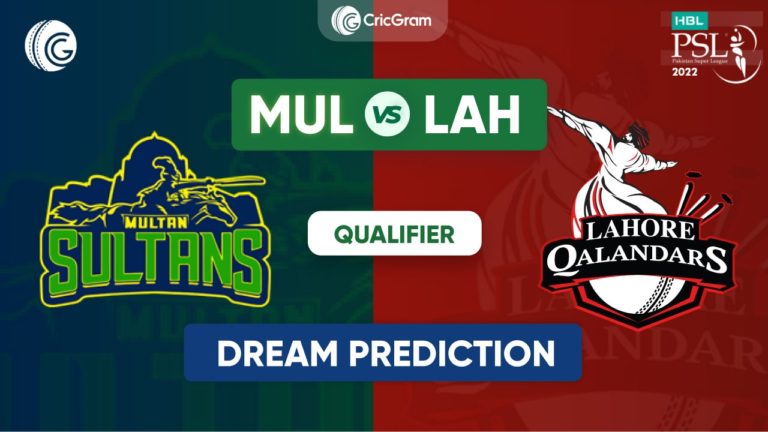 Multan Sultans vs Lahore Qalandars will play in the Qualifier of the Pakistan Super League 2022 at Gaddafi Stadium, Lahore. We will cover MUL vs LAH Dream11 Prediction, Probable Playing 11, and Fantasy Cricket Tips.

Sultans have won nine out of the ten matches and finished the league stage at the top of the points table.

Skipper Rizwan is in tremendous form and scored six fifties this season and Shan Masood has performed equally well but fell early in the last game. In the middle-order, Azmat and Khushdil Shah did not score much but Tim David and David Willey batted well and won the match for the team.

The bowlers have performed on par with the batsmen. Asif Afridi and Imran Tahir picked up two wickets each. Willey, Dahani, and Tim David got one wicket each.

Sultans have been impeccable this season and are the favorites in the Qualifier.

Lahore Qalandars won six out of the ten matches and finished at the 2nd position in the league stage.

Fakhar Zaman is the leading run-scorer but was out for a duck in the last season. Philip Salt and Kamran Ghulam batted well for a while but Hafeez played sensibly, scoring 49 runs and in the end, skipper Shaheen scored 39* runs and helped the team to tie the match.

Lahore Qalandars need to perform better with the bat to win the Qualifier.

(The average score is based on fifteen matches played at this venue this season.)

The bowlers have picked wickets but struggled to control the flow of runs at Gaddafi Stadium. Most of the games have been high-scoring games at this venue, and the 1st innings average score has been 160+ runs.

(The team batting first has won eleven out of fifteen matches played at this venue this season.)

MUL vs LAH Head to Head

Skipper Rizwan is the leading run-scorer for Multan Sultans and scored a fifty in the last game. M Rizwan is very good Captain choice in MUL vs LAH Dream11 fantasy team.

Masood has appeared to be slightly out of form in the recent matches and scored four runs in the last match.

Khushdil Shah scored only two runs in the last game and went wicketless.

Willey has been phenomenal this season and managed to pick up one wicket and scored 28 runs in the last game.

Tahir is the leading wicket-taker for Sultans and got two wickets for eight runs in his four overs in the previous match.

Tim David has performed consistently and scored 17 runs in the last match.

Asif Afridi bowled well picking up two wickets and a maiden over in the last game.

Fakhar Zaman is the highest run-scored but was out for a duck in the previous match.

Skipper Shaheen is the leading wicket-taker for Lahore Qalandars and scored 39* runs in the last game.

Kamran Ghulam bats in the middle-order and scored 25 runs from 18 balls in the last match.

Rauf has been a decent performer and managed to pick up one wicket in the last match.

Hafeez is an experienced player in the middle-order, scored 49 runs, and managed to pick up one wicket in the last match.

Zaman is a young right-arm fast bowler and was expensive and went wicketless in the last game.

Wiese is a good all-rounder and scored one run and managed to pick up one wicket in the last match.