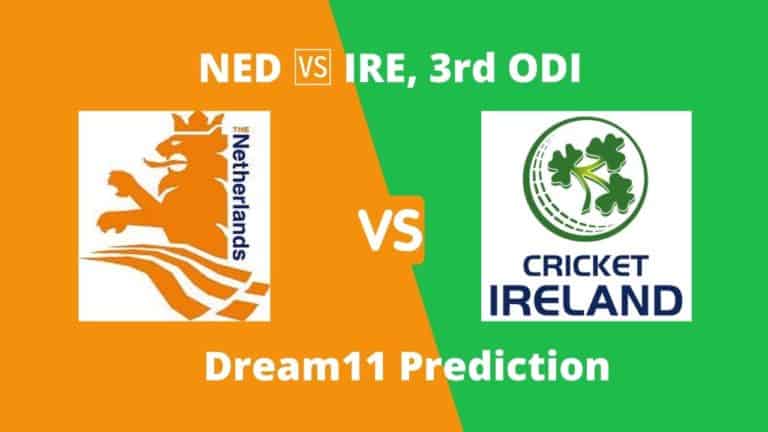 Netherlands and Ireland will play in the 3rd ODI at Sportpark Maarschalkerweerd, Utrecht. We will cover NED vs IRE 3rd ODI Dream11 Prediction, Probable Playing XI, and Fantasy Cricket Tips.

The Netherlands couldn’t keep up the momentum that they got from the first game, put up a bad performance in the last match, and lost it by eight wickets. Both the batting and bowling departments failed to make an impact.

Stephan Myburgh has not scored runs consistently, but his partner Max ODowd has been scoring runs from the top and providing a good start. Ben Cooper struggled a lot in this series and got out for a duck in the last match.

The middle-order of the team put up a better performance in the last match. Once again, Bas de Leede batted decently, and he got decent support from Seelaar and Edwards. Logan Van Beek scored 22* runs, and in the end, Glover added some crucial runs.

The bowlers who had put up a brilliant performance in the first match failed miserably in the second game. Logan Van Beek and Seelaar have been the consistent wicket-takers, and the remaining bowlers have struggled to pick up wickets.

If they keep performing similarly, then they are going to lose the series. The Netherlands needs to improve themselves in all the departments, especially with their batting.

Ireland has made a strong comeback into the series by winning the last match comfortably by eight wickets. The batsmen have improved their performance which they lacked in the first game.

Paul Stirling has been in extraordinary form as he scored a fifty again and played an essential role in the team’s victory. William Porterfield is having a tough time in scoring runs. Skipper Balbirnie is back in form and scored 63* runs, and Harry Tector also played well, and they both lead the team to victory.

The bowlers have been the major strength of the team. They have performed well and picked up wickets consistently. Joshua Little and Craig Young have picked up most of the wickets and took four wickets each in the last game. Andy McBrine and Barry McCarthy also picked up a wicket each.

They have a perfect chance of winning the series if they perform the same way as in the last match. This game also very important for this team as a win in this game would give them a chance to qualify for World Cup.

The pitch is tough to bat on in the first innings, but it becomes a little easier to score runs as the match progresses. The bowlers get wickets easily here. The batsmen need to show a lot of patience. We can expect one more low-scoring game from this venue.

The weather will be sunny and clear skies, and there is no chance of rain during the match.

He opens the innings for the team and has been scoring consistently and scored 36 runs but went wicketless in the last match.

Logan is an excellent all-rounder and has delivered with both bat and ball in this series. He scored 22* runs and managed to pick up a wicket in the last match. He is a good choice for C and VC in your NED vs IRE Dream11 team.

Skipper Seelaar is an all-rounder, but he is better with the ball than the bat. He scored 11 runs and managed to pick up a wicket in the last match.

He is a right-arm medium-fast bowler and can also score some runs down the order. Gugten scored one run and went wicketless in the last match.

Edwards is the wicket-keeper of the team and is a decent striker of the ball. He scored 23 runs in the last match.

He is a left-arm medium-fast bowler and bowls at a decent pace. Klaassen went wicketless in the last match.

Myburgh opens the innings along with Max ODowd. He scored 11 runs in the last match.

Stirling opens the innings for the team and is in brilliant forms. He scored 52 runs in the last match and is a good pick as C or VC in your NED vs IRE 3rd ODI Dream11 Prediction.

Skipper Andy bats at No.3 and appears to be back in form. He batted well and scored 63* runs in the last match. He is a good pick as C or VC in your NED vs IRE Dream11 team.

He is a young left-arm fast bowler and has been brilliant so far in this series. Joshua picked up four wickets and bowled a maiden over in the last match.

Craig is a right-arm medium-fast bowler and picked up four wickets for just 18 runs and bowled two maiden overs.

He is a right-arm off-break bowler. Andy picked up a wicket in the last match and bowled four maiden overs.

He is a right-arm medium-fast bowler; McCarthy managed to pick up a wicket in the last match.

Simi Singh is an all-rounder and bats in the lower-middle order. He went wicketless in the last match.

He opens the innings but has been struggling a lot to score runs. William was out for a duck in the last match.

He is a young right-handed batsman and bats in the middle-order. Tector batted decently, scoring 30 runs in the last match.