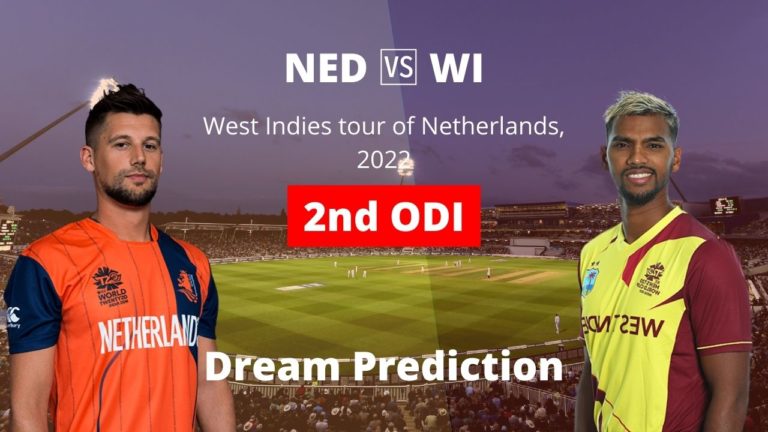 Netherlands vs West Indies will play in the 2nd ODI match of the three match ODI series at the VRA Cricket Ground, Amstelveen.

Netherlands had to face defeat in the last game by 7 wickets but are surely having a great learning experience. Batting first, their batters did a decent job and scored 240 runs in their 45 overs.

Teja Nidamanuru and Vikramjit Singh were the top scorers with the bat and scored 58* and 47 runs respectively. Max O’DOWD also batted decently and scored 39 runs.

With the ball, their bowlers looked ordinary and were unable to pick up wickets regularly. Logan Van Beek and Aryan Dutt bowled decently and picked up two and one wicket respectively.

Netherlands look very weak on paper but will still look to give a tough fight to the Windies.

West Indies comfortably won the 1st ODI by 7 wickets and looked in complete control of the game. The match was reduced to 45 overs due to rain.

With the bat, Shai Hope showed his class at the top and scored 119* runs. Shamarh Brooks and Bradon King also batted very well and scored 60 and 58* runs respectively.

West Indies are the clear favorites to win this game and will look to seal the series by winning this game.

The pitch at the venue is expected to be balanced wicket with equal support for both batters and bowlers. If West Indies bat first we can expect a total of above 300.

The live streaming of Netherlands vs West Indies, 2nd ODI will be available on the Fancode App.

You can also catch the live commentary, scorecard, and latest updates of the 2nd ODI match between NED vs WI by clicking here NED vs WI Live Score.

NED vs WI Head to Head

He is one of their best batsman and will open the innings. Max batted decently in the last game and scored 39 runs.

He is another very talented batter and will bat in the middle-order and also has fair bit of experience. Edwards scored 13 runs in the last game.

He is the skipper of the team and will contribute with both bat and ball. Seelar scored 14 runs in the last game and went wicketless with the ball.

He is their best bowler and will bowl with the new ball. Van Beek bowled very well in the last game and picked up 2 wickets.

He needs no introduction and is one the best batsman on the team. Hope was brilliant in the last game and scored 119* runs and is a very good choice for C and VC in NED vs WI Dream11 Prediction.

He is the skipper of the team and will bat in the middle-order. Pooran scored only 7 runs in the last game but is a quality player and is another solid pick for C and VC.

He will bowl in the powerplay with the new ball and is one of their best bowler. Joseph bowled very well in the last game and picked up one wicket.

He is a very talented left-arm orthodox spinner and will bowl in the middle overs. Hosein was brilliant in the last game and picked up 2 wickets.

He is a right-arm leg spinner and will bowl in the middle overs. Walsh can be a game changers in this game.

He will open the innings with Hope. Brooks batted brilliantly in the last game and scored 60 runs.

He will bat in the middle-order and can also bowl few overs with the ball. King was excellent in the last game and scored 58* runs.

He will contribute with both bat and ball. K Mayers picked up 2 wickets in the last game and can be a trump card pick in this game.