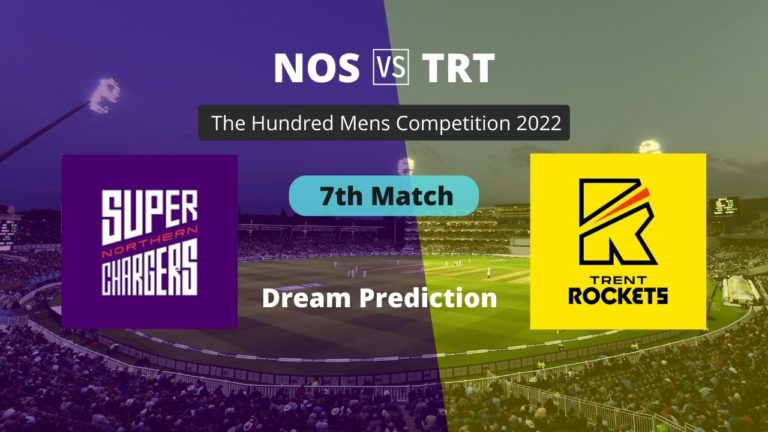 Northern Superchargers vs Trent Rockets will play in the 7th match of the Hundred at Headingley, Leeds.

The Supercharges have started their campaign with a win and won the first game by 6 wickets. They performed brilliantly with both bat and ball.

Bowling first, their bowlers were decent and restricted the Originals to a total of 161. David Willey and Adil Rashid bowled extremely well and picked up 2 and 1 wickets respectively.

Chasing 162, their openers gave them a good start with Adam Lyth being the top scorer with 51 runs in 30 balls. Harry Brook and David Willey also batted very well in the middle order and scored 33 and 29 runs respectively.

Supercharges look well balanced going into this game but will hope for a better bowling performance by their bowlers.

Trent Rockets too have started their Campaign on a positive note by winning their first game against Birmingham Phoenix by 6 wickets.

Bowling first, Their bowlers were excellent and restricted them to 147 runs. Daniel Sams and Samit Patel were the pick from the bowlers and picked up 3 and 2 wickets respectively.

With the bat, their batters were also solid and chased down the total with 3 balls remaining. Alex Hales set the tone at the top and scored 58 runs. Colin Munro and Joe Root gave the finishing touches and scored 36 and 34 runs respectively.

The pitch at Leeds is known for producing some high-scoring thrillers and something similar can be expected in this game too. A score of above 160-170 can be expected by the team batting first.

There is no chance of rain at the venue are likely to witness a full game of cricket without any interruptions.

The live streaming of Northern Superchargers vs Trent Rockets, 7th match will be available on the FanCode App for mobile and PC users.

You can also catch the live commentary, scorecard, and latest updates of the 7th match of The Hundred between NOS vs TRT by clicking here NOS vs TRT Live Score.

He will contribute with both bat and ball. Willey batted in the middle order and scored 29 runs with the bat and also picked up 2 wickets with the ball and is an excellent choice for C and VC in NOS vs TRT Dream11 Prediction.

He is the skipper of the team and is a very experienced player. Du Plessis scored 15 runs in the last game.

He will open the innings and can also bowl if needed. Lyth was brilliant in the last game and scored 51 runs.

Rashid will bowl in the middle phase. He bowled very well in the last game and picked up one wicket.

He needs no introduction and is a very experienced player. DJ Bravo bowled decently in the last game and picked up 1 wicket.

He is another very experienced all-rounder. Wiese went wicketless with the ball and scored 15 runs in the last game.

He is their key player and will open the innings. Hales batted brilliantly in the last game and scored 58 runs. He is another solid option for C and VC in NOS vs TRT Dream11 Team.

Khan needs no introduction and is a world-class player. He went wicketless in the last game and was expensive and will look bounce back strongly.

He will open with Hales and is another very talented batter. Malan scored only 8 runs in the last game but is a quality player.

He will contribute with both bat and ball. Sams was outstanding with the ball in the last game and picked up 3 wickets.

He will bat at 3 and is a attacking player. Munro batted very well in the last game and scored 36 runs.

Root is a quality player and will bat in the middle order. He also batted decently in the last game and scored 34 runs.

This match is risky match for small leagues so try to play only Grand Leagues.

How to choose the best Captain and Vice-Captain in Dream11

He will bat in the middle order and is in excellent form. Brook batted very well in the last game and scored 33 runs and can be a trump card pick in this game.