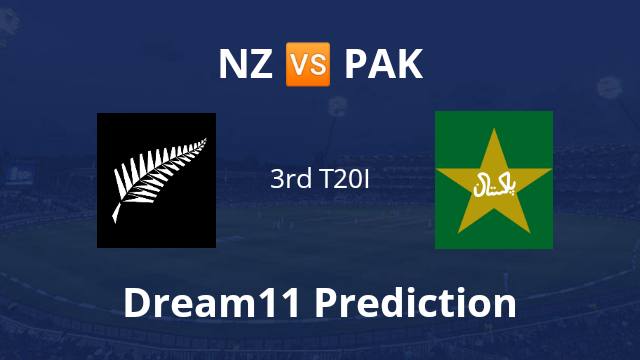 Welcome to our NZ vs PAK Dream11 Prediction, Probable Playing XI, and Fantasy Cricket Tips. New Zealand and Pakistan will be played in the 3rd T20I match at McLean Park, Napier.

The 3rd match of the three-match T20I series between New Zealand and Pakistan will be played at McLean Park in Napier. New Zealand has dominated the series so far by winning the first 2 games comfortably and have also won the T20I series.

On the other hand, the visitors would play for their pride in this game and avoid a whitewash. Pakistan has struggled with their batting in the first two games, and the clear absence of their star batsman Babar Azam can be felt. Apart from Hafeez, none of the batsmen, who played an unbeaten knock 99 runs in the last match, have looked comfortable against the New Zealand pace attack.

Pakistan would hope that their batters give a positive start in the final encounter. While bowling has also been quite ordinary, batting is a bigger concern for this game. However, On the other hand, New Zealand has been excellent both with the bat and bowl. Tim Seifert has been a find for them from this series who has played brilliant knocks of 57 and 84 runs in the series so far. The form of Martin Guptill is a concern as he is yet to perform a big knock in the home season. Kane Williamson was also outstanding with the bat as he scored a 42 ball half-century in the 2nd game.

Jacob Duffy in the first match and Tim Southee in the 2nd match rattled through the Pakistani top order, which ended his spell with figures of 4/27 in his 4 overs. The Pakistani top order has no answers for the initial swing movement and will start the 3rd match with positive intent with the bat, especially from the openers.

Changes from both the camps can be expected in this game as the series did and dusted. Pakistan would look to avoid a whitewash on them and will look to win this game for their pride.

Average 2nd innings score: 180 The pitches in New Zealand are always great to bat on, and this pitch is no different, and a high scoring encounter is on the cards with shorter boundaries. The pitch generally does not have anything much for the bowlers, but the New Zealand bowlers have shown how to succeed with the new ball. The team winning the toss would bat first and put up a good score on the board.

Seifert is perfect after scoring wonderful knocks of 57 and 84* runs in the to games so far. He will open alongside Martin Guptill and will play attacking cricket in the powerplay. He will do the keeping duties for his team and is a top pick for the game.

Kane Williamson is one of the best technically solid batsman in this format. He will bat at No 3 for his team. He played an unbeaten knock of 57 runs and is another top pick for the game.

He is one of the best new-ball bowlers in the world. He went wicket-less in the last game but is a player to watch out for in this game. Considering his recent form in the IPL, he cannot be dropped from your Fantasy team.

One of the best bowlers with the new ball in the world. He will lead the pace attack. Southee was outstanding with the ball in the last game as he rattled through the Pakistani top order and ended his spell with the figures of 21/4 in his 4 overs.

He is one of the best white-ball openers in the world. Martin Guptill has not clicked so far in the home season and will look to play a big inning and retain his spot for the next series. He scored a quickfire 21 runs in 11 balls in the game.

Conway is new to international cricket but was rock solid in the T20I series against the West Indies, scoring 106 runs in the first two games, and is a player to watch out for in this game. He will bat at No 4 for his team.

He is their key all-rounder who will bowl 2-3 overs in the middle overs and will also be their important finisher with the bat. Neesham bowled 2 overs in the last match and also picked the crucial wicket of the Pakistani skipper. He also looked in good form against the West Indies in the recently concluded T20I series.

Philips is one of the best players in this format. He will bat in the middle order for his team. Philips played a quick inning of 23 runs in the first match. Philips did not get to bat in the last game as Seifert and Williamson finished the game.

Mohammad Hafeez is the most experienced player in the camp. He will bat at No three and can also bowl a few overs with the ball. He went for a duck in the first game but showed his worth in the last game as he played an unbeaten knock of 99 runs and took his team to a respectable score in the end.

Shadab Khan is the captain of the team. He will bowl his overs in the middle overs and be handy with the lower order bat. He scored a good knock of 41 runs in the first match but failed both with the bat and bowl in the 2nd match but is quality a player who can perform on his day and is another top pick for the game.

He is another key bowler for the team who will bowl in the powerplay and the death. Shaheen has picked 20 wickets out of 17 matches he has played. He has picked up two crucial wickets for his team in the first game but went wicketless in the last game

He is a right-arm fast bowler. Rauf was the pick from the bowlers in the first match as he picked up three wickets in his four overs but went wicketless in the 2nd match. Haris Rauf took 14 wickets in 10 T20I matches and is another top pick for this game.

He will bowl in the powerplay and death. He is one of the most experienced bowlers in this format but has failed in both games but can be a great differential player for your fantasy teams.

Haider Ali is a youngster on the rise from Pakistan. Ali has also been disappointing with the bat but is again a quality player who can play big on his day and is another differential pick to have in your fantasy sides.

He is a left-arm orthodox spinner who will bowl in the powerplay and will also do the finishing duties for his team with the bat. He has scored 19 runs in the first game but has not done anything special in the series so far but is a quality player who can perform on his day.