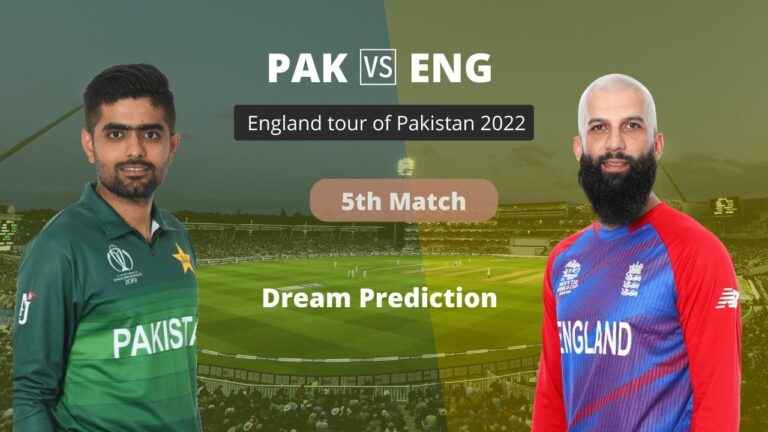 Pakistan vs England will play in the 5th T20I match of the seven-match T20I series at the Gaddafi Stadium, Lahore.

Mohammad Rizwan and Babar Azam have given a really tough time for the English bowlers and are in excellent touch. Shan Masood has also been decent for them in the series so far. They will expect some better performance from their lower order in the upcoming games.

With the ball, their pacers have done a commendable job in the series so far. Haris Rauf and Mohammad Nawaz have been their highest wicket-takers and have picked up 6 and 4 wickets respectively.

Pakistan will look to win this game and take a lead in this series.

England has also played very well on the tour so far but will look to perform better with the ball in the remaining series. They lost the last game by a close margin of 3 runs.

With the bat, their top order has been ordinary in the series so far. Harry Brook and Ben Duckett have been their highest runs scorers in the series by scoring 188 and 167 runs respectively in the 4 games.

With the ball, their pacers have been poor in the series so far. Spinner Adil Rashid is their highest wicket-taker with 4 wickets in 4 games. Mark Wood was brilliant in the last game and picked up 3 wickets in his 4 overs.

The pitch is expected to be very good for batting with short boundaries on both the sides. The 1st innings average score is above 160 and can expect a high scoring encounter. Winning the toss and bowling first will be ideal.

The live streaming of Pakistan vs England, 5th T20I will be available on the Sony Sports Network and also on the SonyLiv app.

You can also catch the live commentary, scorecard, and latest updates of the 5th T20I match between PAK vs ENG by clicking here PAK vs ENG Live Score.

PAK vs ENG Head to Head

He is one of the best batsmen on the team and will open the innings. Rizwan is the highest run-scorer in this series and is a default pick for C and VC in PAK vs ENG Dream11 Prediction.

He will open the innings along with Rizwan and is a world class batter. Babar played decently in the last game and scored 36 runs.

He will bowl in the middle and death overs and is known for his pace. Rauf bowled brilliantly in the last game and picked up 3 wickets.

He will contribute with both bat and ball and is in excellent form. Nawaz bowled very well in the last game and picked up 3 wickets.

He is a very experienced player and will bat at 3. Masood scored 21 runs in the last game.

He is the skipper of the team and is also one of the best all-rounders on the team. Ali batted decently in the last game and scored 29 runs. He is another very good choice for C and VC in PAK vs ENG Dream11 Team.

He will open the innings and is known for his hard hitting. Hales scored only 5 runs in the last game but is a quality player.

He is another very good all-rounder from the team. Willey bowled decently in the last game and picked up 1 wicket.

Brook will bat in the middle order and is a very talented player. He is the highest run-scorer for the team in this series so far.

Wood will bowl in powerplay and death. He was brilliant in the last game and picked up 3 wickets in his spell.

He is a right-arm leg spinner and will bowl in the middle overs. Rashid has picked up 4 wickets in his 4 overs so far.