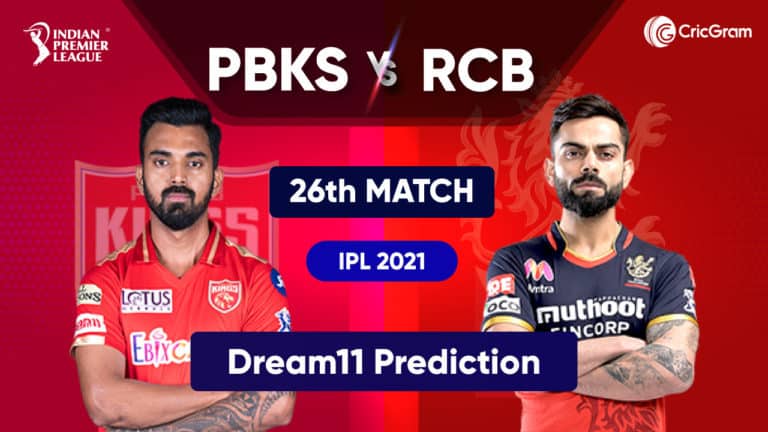 Punjab Kings and Royal Challengers Bangalore will play against each other in the 26th match of IPL 2021 at Narendra Modi Stadium, Ahmedabad. We will cover PBKS vs BLR Dream11 Prediction, Probable Playing XI, and Fantasy Cricket Tips of IPL 2021.

Punjab Kings have managed to win only two out of the six matches and are currently at the 6th position on the points table with four points. They performed poorly in the lost game and, as a result, lost by six wickets.

The openers KL Rahul and Mayank Agarwal have been doing a decent job providing a good start but have been slightly slow in their approach. At No.3, Chris Gayle has played only a couple of good knocks so far this season.

In the middle-order, except for the first match, Deepak Hooda hasn’t played a big inning. Nicholas Pooran finally managed to score some runs in the last game. Moises Henriques has also not appeared to be batting comfortably, and the youngster Sharukh Khan is playing well, but he needs to score runs quickly. Jordan batted well in the last match and scored runs rapidly.

The bowlers are also similar to the batsmen as they have also lacked consistency in their performance. Mohammad Shami and Arshdeep Singh have been the go-to bowlers for PBKS, and they managed to pick up a wicket each in the last match. The spinners Deepak Hooda and Ravi Bishnoi are also bowling well, picking up some crucial wickets. Henriques managed to pick up a wicket in the last match.

Punjab Kings have been making changes in their playing XI, and batting order, which they need to sort out as almost half the tournament is over.

Royal Challengers Bangalore are back to winning ways and have won five out of the six matches and are currently at the 2nd position on the points table with ten points. They performed well in the last game and won the thrilling encounter by just one run.

Except for one match, Virat Kohli has not scored runs freely and appeared to be struggling slightly. Padikkal is batting well, scoring quick runs, but he is getting out early from the last couple of matches. At No.3, Rajat Patidar batted well after a couple of failures.

Glenn Maxwell and AB de Villiers have been the team’s backbone as they have handled the middle-order very well. Maxwell hasn’t scored much in the last match, but de Villiers batted magnificently, scoring 75* runs and helped the team to post a good total. With Daniel Sams coming into the team, the lower middle-order looks better.

The bowlers have been very impactful for RCB so far. Harshal Patel is consistently picking up wickets and picked up two wickets in the last match. Kyle Jamieson and Siraj have also done a brilliant job in the pace department. The team’s spin department is looking a little weak as both Chahal and Sundar are struggling to pick up wickets.

Royal Challengers Bangalore has appeared to be a balanced team in the last match, and they need to keep performing the same way.

The ground is a massive one, and batsmen will have to put extra effort to score boundaries. The pitch is neutral between bat and ball. Teams would prefer to chase because of the dew factor. We can expect a high-scoring game between PBKS vs BLR.

Skipper KL Rahul is in good form so far this season and has scored three fifties already but is scoring runs at a lower strike rate. He scored 19 runs in the last match and is a good choice for Captain in PBKS vs BLR Dream11 Team.

He opens the innings and is an excellent striker of the ball. Agarwal scored 31 runs in the last match.

Gayle bats destructively, but this season he has been remarkably silent. He was out for a duck in the last match.

He is an experienced player and bowls at a perfect pace. Shami bowled well and picked up a wicket in the last match.

He has been performing well this season. Arshdeep managed to pluck a wicket in the last match.

Hooda is a batting all-rounder and bowls right-arm off-break. He scored only one run and was expensive with the ball but managed to pick up a  wicket.

He is a middle-order batsman and can bowl a few overs of medium pace. Henriques scored only two runs but picked up a wicket.

He is a young right-arm leg-break bowler and bowled very well in the last match but was unlucky to go wicketless.

(yet to play in the IPL)

Pooran can play big shots in the middle-order. He has been entirely out of form this season and scored 19 runs from 19 balls in the last match.

He is an all-rounder and can play the role of finisher very well. Sharukh scored 153 runs in the previous game.

Richardson was one of the expensive buys for PBKS, but he has not performed up to expectations. He did not play the last match.

He is a right-arm fast bowler and batted brilliantly in the first match of the season, scoring 30 runs from just 18 balls but went wicketless.

Virat Kohli has appeared to be struggling in the last couple of matches. He scored only 12 runs in the previous game, but he is a perfect pick as a Captain in PBKS vs BLR Dream11 Team.

He is a young left-handed batsman and is batting aggressively this season. Padikkal scored 17 runs in the last match.

Maxwell is an all-rounder and provides stability in the middle-order. He scored 25 runs in the last match.

ABD has been in brilliant form so far this season and scored 75* runs from just 42 balls in the last match.

He is currently the purple cap holder. Harshal picked up two wickets in the last match.

Jamieson has managed to pick up some crucial wickets this season. In the last match, he managed to pluck a wicket.

He is an all-rounder and can perform pretty well with both bat and ball. Daniel Sams scored 3* runs and went wicketless in his first match of the season.

He is a right-arm fast bowler and has improved a lot this season. Siraj was expensive but managed to pick up a wicket.

W Sundar has neither contributed much with the bat nor the ball. He scored six runs and went wicketless in the last match.

He is an experienced spinner in the team and has appeared to be out of form this season. Chahal went wicketless in the last match.

He batted brilliantly in the last game and scored 31 runs when the team was struggling.