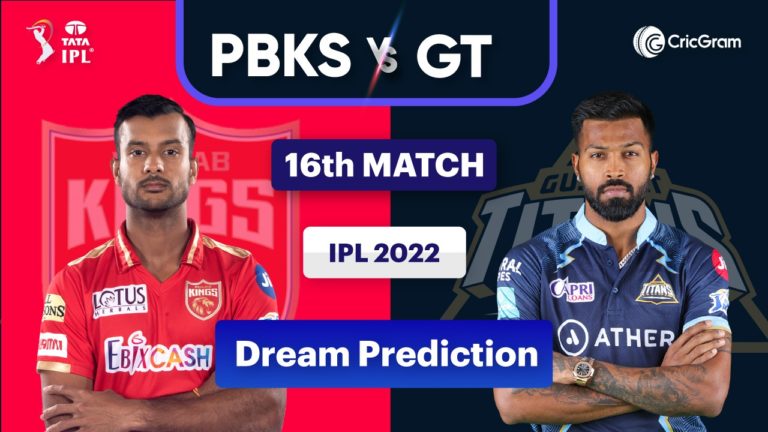 PBKS vs GT Dream11 Prediction, Probable Playing 11, and Fantasy Cricket Tips. Punjab Kings vs Gujarat Titans will play in the 16th match of the IPL 2022 at the Brabourne Stadium, Mumbai.

They have played 3 games so far and have won 2 games and are placed at the 4th position on the points table. PBKS were excellent in their last game against CSK and won it comfortably by 54 runs.

Batting first, they scored an excellent score of 180 in the last game. Liam Livingstone has finally returned to form and played a brilliant knock of 60 runs in the middle-order. Jitesh Sharma also played a very handy knock of 26 runs on his debut and helped his team reach a good total.

With the ball, they were clinical and bowled out the CSK batters for just 126 runs. Rahul Chahar has been outstanding in this season so far and picked up 3 wickets in his 4 overs in the last game. Liam Livingstone and Vaibhav Arora also bowled very well and picked up 2 wickets each.

Overall, PBKS will be high on confidence in this game and will look to continue their winning ways.

GT have been unbeatable in the tournament so far and their bowling attack is looking very dangerous on paper. They were brilliant against DC in their last game and won it by 14 runs.

Batting first, They were slow to start the innings in the powerplay but Shubman Gill was exceptional in the middle overs and played a brilliant knock 84 runs of just 46 balls. Hardik Pandya also played very well in the middle order and scored 31 runs.

With the ball, Lockie Ferguson was outstanding for them and picked up 4 crucial wickets in his 4 overs. Mohammad Shami and Hardik Pandya also bowled very well and picked up 2 and 1 wicket respectively.

GT are yet to lose a game and will look to play freely in this game. Both the teams look equally balanced going into this game.

The pitch at Brabourne Stadium is expected to be a balanced wicket and both batters and bowlers are expected to get some assistance from the surface. Batting is likely to be easy in the 2nd innings. Winning the toss and bowling first would be ideal.

The live streaming of Punjab Kings vs Gujarat Titans, 16th match of IPL 2022 will be available on Hotstar app and Star Sports Network.

You can also catch the live commentary, scorecard, and latest updates of the Indian Premier League 2022 match between PBKS vs GT on IPLT20.com.

PBKS vs GT Head to Head

Both the teams are facing each other for the first time.

He is one of their best all-rounders this season. Livingstone will bat in the middle order and can also bowl a few overs with the ball. He played a brilliant knock of 60 runs with the bat and also picked up 2 wickets with the ball. Livingstone is an excellent pick for C and VC in PBKS vs GT Dream11 Prediction.

He will bat in the top order and is in very good form. Dhawan also played very well and scored 33 runs in the last game.

He is a Right-arm leg spinner and will bowl in the middle-overs. Chahar has been bowling very well in this season. He was outstanding in the last game and picked up 3 wickets.

He is the skipper of the team and will open the innings. Agarwal is not looking in good form and will be desperate to score runs in this game.

Smith will do the finishing duties with the bat and can also bowl a few overs with the ball. Smith bowled very well in the last game and picked up 1 wicket.

He is a wicket-keeper batsman and is likely to bat at 3. Bairstow is a very attacking player and can be lethal in this game.

He is a very talented fast bowler. Arshdeep has finally returned to his best and picked up 1 wicket in the last game.

He is the skipper of the team and will bat in the middle-order and also bowl 4 overs with the ball. Pandya batted very well in the last game and scored 31 runs and also picked up a wicket with the ball. He is another brilliant pick for C and VC in PBKS vs GT Dream11 Team.

Gill will open the innings and is one of their best batsman. He was dismissed for a duck in the first game but played a brilliant knock of 84 runs in the last game.

He will lead the bowling attack and is one of the best pacers. Shami bowled brilliantly in the last game and picked up 2 wickets.

He will open the innings and is a very experienced player. Wade scored only 1 run in the last game and can be a trump card pick in this game.

He is a very talented fast bowler and is known for his pace. Ferguson was outstanding in the last game and picked up 4 wickets.

He is another very important all-rounder for them and will do the finishing duties. Tewatia played a very handy knock of 14 runs in the last game.