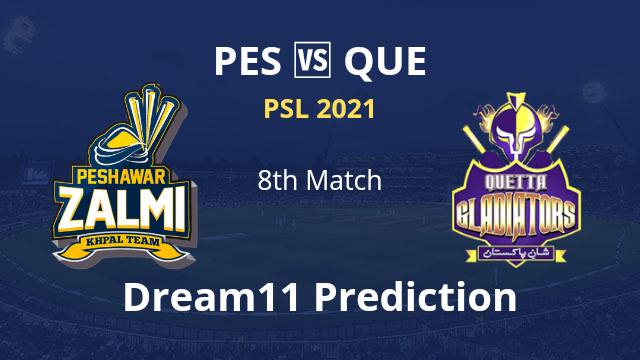 Hello and welcome to our PES vs QUE Dream11 Prediction, Probable Playing XI, and Fantasy Cricket Tips. Peshawar Zalmi and Quetta Gladiators will play against each other in the 8th match of the Pakistan Super League 2021 at National Stadium, Karachi.

Zalmi has made a decent start to the tournament as they are currently at the 4th position with one win and one loss and a total of 2 points. In the last match, they performed brilliantly and won the game by six wickets.

The opening pair Imam-ul-Haq and Kamran Akmal, after a disappointing start in the first match, batted well in the last game and gave the team a perfect birth. Imam missed his fifty by just two runs. At No.3, a new batsman Tom Kohler-Cadmore batted well and scored a half-century.

Sherfane Rutherford has been promoted up the order, and he, along with Shoaib Malik, has performed decently in the middle-order so far in this season. After a disappointing performance in the first match, Haider Ali batted well in the second match and took his team over the finishing line.

After scoring a brilliant fifty in the first match, Ravi Bopara did not play the second match. The bowling department needs to improve a lot and looks very weak among all the other teams. Skipper Wahab Riaz was very expensive and went wicketless in the last match.

Saqib Mahmood has been the consistent wicket-taker for Zalmi and has picked up two wickets in both games. Mujeeb Ur Rahman picked up a wicket in the first match but was expensive and went wicketless in the last game.

Peshawar Zalmi would want to continue their winning momentum by winning their next match against the Gladiators.

Gladiators face a challenging situation in the initial matches and are still searching for their first win. They are currently at the bottom of the points table. In the last game, Gladiators had to face disappointment as they lost the match by 9 wickets.

Opener Tom Banton has appeared to be struggling and got out early in both the matches. The new opener Saim Ayyub also got out early without disturbing the scoreboard much. Chirs Gayle at No.3 has been batting brilliantly and scored a brilliant fifty in the last game.

Skipper Sarfaraz batted well in the last match after changing his batting order. Azam Khan and Mohammad Nawaz have been batting decently, but they need to improve their six-hitting as they are considered the finishers and the well-known all-rounder Ben Cutting.

Quetta Gladiators would be desperate to win this match against the Zalmi and put a break to their streak of losses.

The pitch here is generally considered a little slow, and so was the case in the initial matches, but the last two games were high-scoring games, so we cannot precisely predict how the pitch will play.

(The chasing team has won five out of the five games played at this venue in this season.)

He is a left-handed batsman and generally opens the innings for the Zalmi. Imam batted well, scoring 48 runs in the last match. He is very good to pick in PES vs QUE Dream Team.

He is a wicket-keeper batsman. Kamran Akmal batted decently, scoring 37 runs in the last match.

Cadmore is a right-handed English batsman and bats at No.3 for Zalmi. He batted well in the last match and scored a brilliant fifty.

He is one of the most experienced players on the side who can bat and bowl as per the team’s requirement. Malik scored 11* runs in the last match.

He is a young right-handed batsman and bats in the middle-order. Ali scored 24* runs from just eight balls in the last match.

Skipper Riaz is the leading attacking bowler on the team. He was very expensive and went wicketless in the last match.

He is a right-arm fast bowler and picks up wickets consistently. Saqib picked up two wickets in the last match.

He is an all-rounder but is mostly known for his batting. He missed out on the last match, and there is news that he is injured, but it is not confirmed yet.

Chris Gayle is the universe boss and one of the best batsmen in T2O format. He scored 68 runs from 40 balls in the last match.

Skipper Sarfaraz is a wicket-keeper batsman of the team. He batted well, scoring 40 runs in the last match.

He is a young batsman and generally opens the innings for Gladiators. Banton has been appeared to be struggling to score runs so far this season.

He is a young right-arm fast bowler. Hasnain went wicketless in the last match.

He is a bowling all-rounder and can play some big shots down the order. Nawaz scored 33* runs but went wicketless in the last match.

He is a left-arm fast bowler and bowls at a decent pace. Shinwari was very expensive and went wicketless in the last match.

The final Dream11 team will be updated on Cricgram Telegram⇒ Subscribe Now.