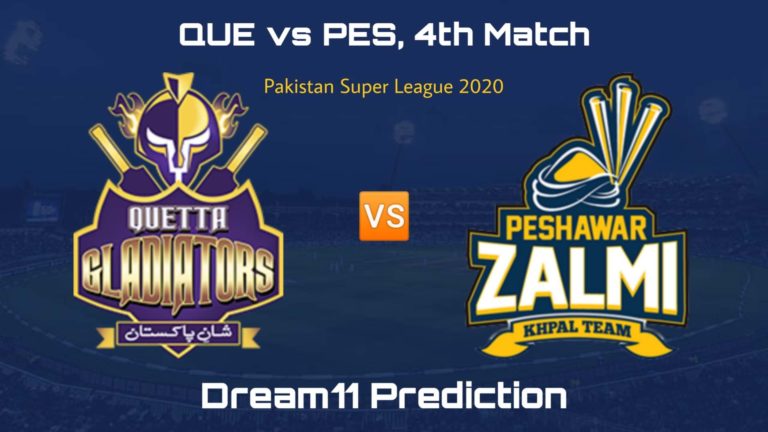 Quetta Gladiators will take on Peshawar Zalmi in the 4th match of Pakistan Super League 2020 at National Stadium in Karachi. We will provide QUE vs PES Dream11 Prediction, Probable Playing XI, and Fantasy Cricket Tips.

The defending champions have started the tournament by winning their 1st match against Islamabad United, and the entire team appears to be in a great form.

In the last match, bowling first Gladiators picked up the wicket of the 1st ball and picked up another wicket in the 4th over but gave away 55 runs in the power play. They gave away too many runs until the 12th over where they picked up the 3rd wicket, and from there on, they picked up wickets at regular intervals and got the opposition all out for 168 runs in 19.1 overs. Gladiators gave only 54 runs in the last 9 overs and picked up 8 wickets. Mohammad Hasnain bowled brilliantly and picked up 4 wickets for just 25 runs in his 4 overs. Ben Cutting was also impressive with 3 wickets for 31 runs in 4 overs. Sohail Khan picked up 2 wickets, and Mohammad Nawaz picked up 1 wicket.

With 169 runs to chase, Gladiators lost the wicket of Jason Roy for a duck on the 2nd ball. They also lost the big wickets of Shane Watson for 15 runs, and Ahmed Shehzad for 7 runs in the 4th and 5th runs, respectively. They had scored only 36 runs in the power play and looked in deep trouble. But Sarfaraz Ahmed 21 runs and Azam Khan’s brilliant innings of 59 runs from just 33 balls provided stability for the Gladiators in the middle overs. In the end, Mohammad Nawaz  23 runs from 13 balls, Ben Cutting 22 runs from 12 balls, and Sohail Khan 14 runs from 9 balls ensured Gladiators a victory by 3 wickets with still 9 balls remaining.

Quetta Gladiators would want to win their next match against Peshawar Zalmi and continue their winning momentum in the tournament.

Peshawar Zalmi had to face disappointment in their opening match of the season against Karachi Kings.

With such a massive total of 202 runs to chase, Zalmi lost the wicket of Tom Banton for 13 runs in the 4th over and, in the same over, lost the wicket of Haider Ali for 4 runs. Kamran Akmal 43 runs and Shoaib Malik 16 runs tried to stabilize the innings, but they too got out in the 9th and 10th overs, and Zalmi were once again in trouble. Liam Livingstone and Darren Sammy fought hard by scoring 54* runs and 30 runs, but in the final over, they were not able to score 16 runs from 6 balls and lost the match by 10 runs.

Though they lost their 1st match, they had performed pretty well and would like to improve their bowling performance and win the next game against Quetta Qalandars.

Average 1st innings score: 185 (From the 2 matches completed so far in this season)

Average 2nd innings score: 181 (From the 2 games completed so far in this season)

The pitch here is generally considered to be good for batting.

Jason Roy:
He is a right-handed batsman and opens the innings for the Gladiators. Roy is a destructive batsman and can cause havoc once he gets set on the crease, but he was out for a duck in the last match.

Shane Watson:
He is of the top all-rounders in the world and has played several leagues in the world, but he hasn’t been bowling from the past couple of years. Watson opens the innings for Gladiators and still can play big innings. In the last match, he was able to score only 15 runs.

Ben Cutting:
He is a bowling all-rounder and can also score quick runs down the order. Cutting bowled brilliantly in the 1st match by picking up 3 wickets and also scored 22* runs from 12 balls in the end and helped in winning the game.

Mohammad Hasnain:
This young 19-year old right-arm fast bowler who can bowl at a perfect pace and is also an attacking bowler. Hasnain impressed everyone with his bowling in the 1st match as he picked up 4 wickets for just 25 runs in his 4 overs.

Fawad Ahmed:
He is a Right-arm leg-break bowler. Fawad Ahmed played 103 T20s and took 106 wickets. In the previous match, he didn’t take any wicket.

Ahmed Shehzad:
He is a right-handed batsman and is a good striker of the ball. Shehzad bats at No.3 for his team but was able to score only 7 runs in the previous match.

Mohammad Nawaz:
He is a bowling all-rounder. In the previous game, Nawaz took 1 wicket and scored 23 runs.

Sarfaraz Ahmed:
Skipper Sarfaraz is the wicket-keeper batsman for Qalandars and is known to play a sensible inning in the middle order. In the previous match, he batted decently and scored 21 runs from 18 balls.

Azam Khan:
He is a 21-year old right-handed batsman and can play big innings. Azam looked impressive in the last match as he scored 59 runs from 33 balls and played a crucial role in winning the game.

Kamran Akmal:
He is the wicket-keeper batsman for Zalmi and is one of the batsmen with the highest runs in the PSL and has also scored two hundred. Akmal batted very well in the last match scoring 43 runs from 26 balls.

Tom Banton:
This 21-year old right-handed batsman has been in the limelight recently due to his ability to score runs quickly and six-hitting capability. Banton opened the innings for Zalmi and scored 13 runs in the last match.

Liam Livingstone:
He is an outstanding batsman, especially in the T20 format. Liam is a good striker of the ball and is generally known for scoring runs quickly across the world. He scored 54* runs from 29 balls in the last match.

Wahab Riaz:
He is a left-arm fast bowler and bowls at a good pace. Wahab has picked up the most number of wickets in PSL history. He went wicketless in the last match.

Hasan Ali:
He is a right-arm fast bowler who is known for his consistency in picking up wickets. Hasan has 2nd highest number of wickets in PSL. He picked up 2 wickets but gave away too many runs in the last match.

Shoaib Malik:
He is one of the most experienced all-rounders in the world and has also played several leagues across the globe. Malik played decently in the last match and scored 16 runs but went wicketless.

Darren Sammy:
Skipper Sammy bats in the lower middle order and can hit the ball over the park. In the last match, he played decently by scoring 30 runs from 20 balls.