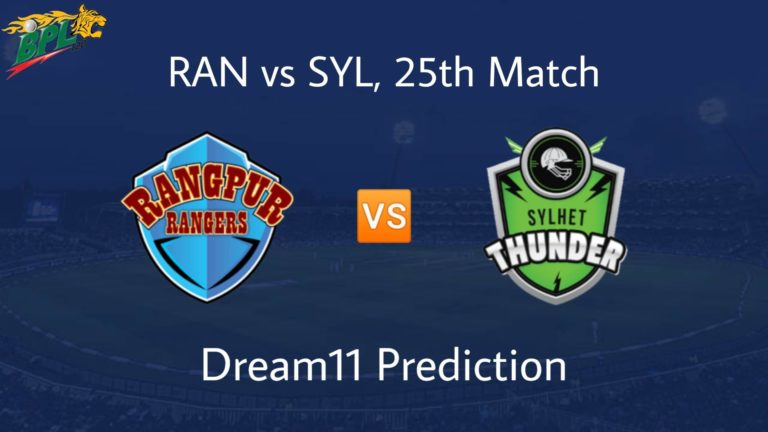 Rangpur Rangers will take on Sylhet Thunder in the twenty-fifth encounter of Bangladesh Premier League 2019 at Shere Bangla National Stadium in Dhaka. We will provide RAN vs SYL Dream11 Prediction, Match Preview, and Fantasy Cricket Tips.

Rangers are situated on the bottom end of the points table with five defeats in six matches and are struggling to perform as a team. They lost their last game against Khulna Tigers by 52 runs.

Bowling first, Pace duo of Mustafizur and Gregory bowled lethal spells taking five scalps among them to restrict Tigers at 182. In the chase, No batsmen could play a match-winning knock for the side and ultimately collapsed on 130 runs. Lewis Gregory was the top scorer with the bat for his 34-run knock. A unison effort will be required from all players tomorrow to end their dismal run in BPL 2019.

They are just above Rangpur Rangers in the points table with only one victory in seven matches and need to put a splendid effort in remaining games to stay alive in the competition.

In the last match, They lost to Khulna Tigers by 8 wickets. Batting first, Fletcher and Rubel Mia had a good opening stand of 62 runs with former scoring 24-ball 37 runs knock. Sherfane Rutherford and Mosaddek Hossain scored good cameos of 26* and 23* respectively to take the team to a total of 157. In defense, Ebadot Hossain and Rutherford took one scalp each but were not enough to prevent Tigers from a tidy chase.

Pitch is expected to be neutral with good support to batsmen, pacers, and spinners.
Pacers from first innings and spinners from second innings along with top-order batsmen will be the key in your team combination.

Lewis Gregory: He is a talented all-rounder and has taken eight scalps till now in six matches along with few cameos with the bat. He scored 34 runs and struck twice in the last encounter.

Mohammad Nabi: He is one of the best all-rounders in this format but has been lackluster till now in the season, failing to put any splendid effort. He took one scalp in the last match and should be tried as captain in grand leagues.

Mohammad Naim: Young opener Naim has been in good form in recent times. He has scored 176 runs till now in six matches at an attacking strike rate.

Mustafizur Rahman: Pacer Rahman is the best Bangladesh pacer and has troubled world-class batsmen with his left-arm pace. He has taken nine scalps this season, including three wicket-haul in the last match.

Shane Watson: Veteran Aussie star player Watson was at his former best in T10 league and will be eager to lead the batting unit from the front. He scored five runs in his first match yesterday.

Cameron Delport: He performed well in recently concluded Mzansi Super League but is generally a hit-or-miss type player. He is yet to make a mark in BPL’19.

Mohammad Shahzad: He is a true ambassador of Afghan power and is a very attacking opener. He scored 61 runs from 27 balls in his second last match but is unlikely to play tomorrow.

Johnson Charles: Windies power hitter Charles is in good form presently scoring 253 runs in seven matches and will be a must-pick in your fantasy team.

Andre Fletcher: Opener Fletcher can be a match-winner once set and has scored 188 runs till now in five innings, including 37 runs in the last match.

Mosaddek Hossain: Skipper can play crucial knocks in the middle order along with the part-time spin. He has scored 185 runs till now and can be the right choice as captain in grand leagues.

Mohammad Mithun: He has scored 179 runs till now and has been a consistent performer for the Bangladesh team. However, He got out on a duck in the last match.

Sherfane Rutherford: He is an attacking yet reliable lower-order hitter and can also bowl a few overs of spin. He scored 38* and 26* runs in his two matches till now and also took one scalp.

Krishmar Santokie: Pacer Santokie has excellent wicket-taking skills and is in lethal form. He has taken seven scalps till now but can be a risky pick in SYL vs RAN Dream11 team.

Ebadot Hossain: He is a talented pacer and has taken six scalps till now. His economy has also been at the lower side.


The final team will be updated on Cricgram Telegram ⇒ Subscribe Now

If you liked Sylhet Thunder versus Rangpur Rangers Dream11 Prediction, then follow us on Twitter for Dream11 Team and Fantasy Cricket Tips. You can also find us on Facebook.