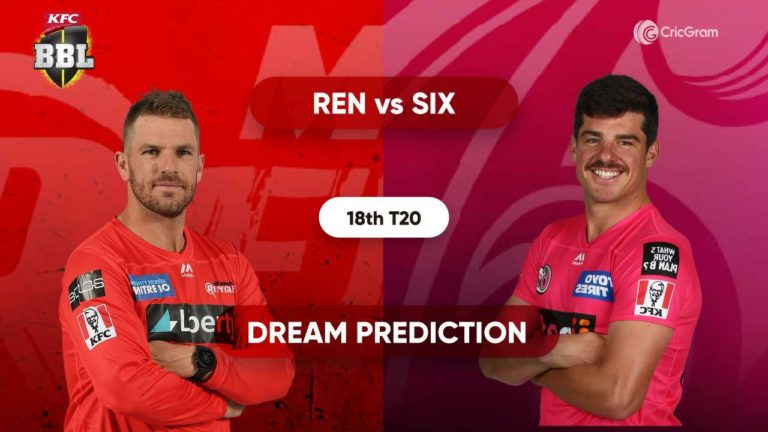 Hello and welcome to our REN vs SIX Dream11 Prediction, Probable Playing XI, and Fantasy Cricket Tips. Melbourne Renegades and Sydney Sixers will play against each other in the 18th match of the Big Bash League 2020-21 at Carrara Oval, Queensland.

The last season’s form has been haunting Melbourne Renegades as they have won only one out of four matches and are currently at the 7th position on the points table with a total of 4 points. They lost their last game by a massive margin of 129 runs.

Opening batsman Shaun Marsh once failed to provide a good start, and skipper Aaron Finch has also not played a big inning so far this season. Except for one match, Sam Harper and Rilee Rossouw have not been able to score runs in the middle order.

The remaining players have also not been able to perform as per the expectations so far this season. As a result, this is the second time that Renegades have lost by such a massive margin in just four matches.

Even bowlers have not been performing up to the mark, which has been a significant concern for the team. Kane Richardson is the only bowler in the team who has been consistently picking up wickets in every match. The other bowlers have also performed well, but they have lacked consistency.

Renegades need to improve their performance on the whole before it’s too late and need to start winning matches from now on or else it will be tough for them in the future.

The Sydney Sixers are having a great time so far as they have won 3 out of 4 matches and are currently at the 1st position on the points table with a total of 12 points. In the last game, Sydney Sixers performed brilliantly and won the match by just one wicket.

But their skipper Daniel Hughes has been performing exceptionally well from the last two matches and was the main reason for the previous game’s win. Dan Christian and Jordan Silk have also been performing their roles in the middle-order brilliantly.

Jason Holder and Carlos Braithwaite have been providing the required finish with their batting in the lower middle-order.

The bowlers also have been performing well and complementing their batsmen very well. Steve O’Keefe and Ben Dwarshuis have been the most consistent bowlers in picking up wickets. Jason Holder, Gurinder Sandhu, Ben Manenti, Braithwaite had also managed to pick up wickets when it was required for the team.

Sixer would be very high on confidence after their consecutive wins, and they appear to be one of the strongest teams so far in this season.

Not many matches have been played at this venue so far, but we can say that the pitch here is generally were good for batting and the bowlers will have to work hard to pick up wickets. There will provide some assistance for the fast bowlers early in the innings.

The chasing team has won one out of the one match.

The weather will be mostly cloudy with a little chance of rain during the match.

Aaron Finch will open the innings for his side. He is looking in good form since the India series and will continue the same in the BBL. In the last match, he scored 20 runs.

Shaun Marsh generally opens the batting along with Finch. Marsh scored only 3 runs in the last match and has not performed well in the previous three games.

Sam Harper is a young batsman who had played some good knocks last season. He scored only eight runs in the previous match and has looked out of form this season.

He is one of the top all-rounders in the T20 format and has played several leagues worldwide. Nabi scored one run and was very expensive with the bat but managed to pick up a wicket.

He is a left-handed batsman and made his BBL debut this season. Rossouw scored only 17 runs in the last match.

Kane Richardson is an excellent right-arm fast-medium bowler and is known for death bowling. In the last match, Richardson bowled well picking up two wickets.

Josh Lalor is the most experienced fast bowler in the squad. He did not play the last match.

He is a 22-year-old leg-spinner and made his debut this season. Peter bowled well picking up two wickets in the last match.

Josh Philippe will open the innings for his side and will look to play attacking cricket in the powerplay. In the last match, he scored only 22 runs.

Skipper Hughes is a left-handed batsman and plays according to the situation of the match. In the last game, he batted exceptionally well scoring 96 runs and was also awarded Man of the Match.

He generally bats at No 3 for his team and is a player who can strike the ball very well. James Vince was out for a duck in the last match.

Ben Dwarshuis is a brilliant bowler who can pick crucial wickets for his team in the powerplay and the death. In the last match, he was very expensive but managed to pick up a wicket.

He is a bowling all-rounder. Jason Holder scored 18 runs and also picked up one wicket in the last match.

Dan Christian is a complete all-rounder who will bowl his four overs in the middle and death overs and do his team’s finishing duties with the bat. He scored 11 runs in the last match but was very expensive and went wicketless in the last match.

He is a hard-hitting all-rounder who is equally god with the bat and ball. Brathwaite scored 21 runs from just 12 balls in the last match but went wicketless.

He is a left-arm orthodox bowler and is consistent at picking up wickets. Steve bowled well in the last match, picking up two wickets for just 13 runs.

We will update the last Dream11 team on Telegram ⇒ JOIN NOW.