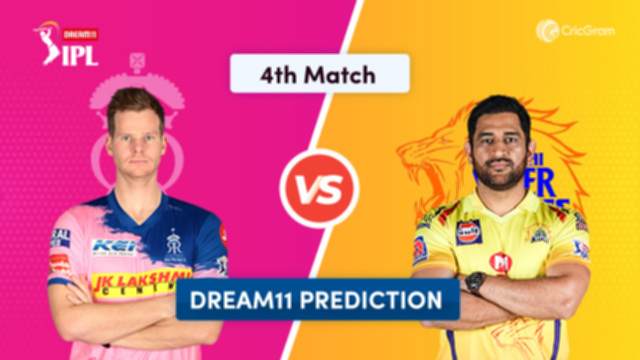 Rajasthan Royals were the champions in the 1st season, but their journey has been downhill since then. They haven’t been able to even reach the finals in any of the seasons. But this time, things might change around for them with players like Steve Smith, Jos Butler, Jofra Archer, and youngsters like Yashasvi Jaiswal and Kartik Tyagi.

Middle-order also looks quite good, and they would be hoping to turn things around and win the trophy this year.

Chennai Super Kings had a good start to the tournament as they won their 1st match against MI. They would be hoping to continue the winning streak in the game against RR.

In the last match, bowling first, Super Kings gave away 51 runs in the power play but managed to pick up 2 wickets. They picked up 3rd wicket in the 11th over, and after that, they picked up wickets consistently and restricted the opposition to a total of 162 runs in 20 overs for 9 wickets.

With 163 runs to chase, CSK lost the wicket of Shane Watson for 4 runs, and Murali Vijay for 1 run in the first 2 overs. But Ambati Rayudu 71 runs from 48 balls and Faf du Plessis 58* runs a partnership of 115 runs for the 3rd wicket. In the end, Sam Curran’s 18 runs from 6 balls helped Chennai to seal the victory by 5 wickets.

The pitch here is suitable for batting and bowling, but there is a slight advantage for the bowlers in the 1st innings.

There will be the due factor in the 2nd innings, which will trouble the bowlers but somehow, the teams batting first have managed to win most of the matches.

He opens the innings for RR along with Butler and is a good striker of the ball. Samson has 2 centuries to his name so far in IPL.

He is a right-handed batsman and bats according to the situation of the match. Steve Smith has a hundred so far in IPL

He will be making his debut for the Royals this season and has an excellent record in IPL. Uthappa has scored 24 fifties so far in IPL.

He is a right-arm fast bowler and can be handy with the bat down the order. Jofra looked in good form in the series against AUS as he consistently picked up wickets. He is very good to pick in RR vs CSK Dream11 Team.

He is an all-rounder but mostly known for his bowling. Gopal has a hat-trick to his name in IPL.

He is a left-arm medium-fast bowler and deceives the batsmen with his slower balls. Unadkat did not perform well in the last season as he gave away too many runs and picked up only 10 wickets.

He is a left-handed batsman and has impressed everyone with his domestic leagues and the U-19 World Cup performance.

He is a right-handed batsman and an excellent striker of the ball. Faf opens the inning along-side Shane Watson and has won quite a few matches for the team. He batted brilliantly, scoring 58* runs in the last match

He is a decent striker of the ball and plays according to the situation of the match. Rayudu played exceptionally well, scoring 71 runs from 48 balls and was awarded Man of the Match.

Shane Watson is a dangerous player for any opponent as he can turn the game towards his side on the back of his brilliant batting skills. He scored only 4 runs in the last match.

He is one of the top allrounders in India. Jadeja can hit some big sixes down the order and pick up a few wickets with his spin bowling. He picked up 2 wickets and scored 10 runs in the last match. R Jadeja is must have pick in RR vs CSK Dream11 small league team.

He is an all-rounder and is equally good with both bat and ball. Curran performed well in the 1st match, scoring 18 runs from just 6 balls and also picked up 1 wicket.

He is a right-arm fast bowler and is good at controlling the flow of runs. Deepak Chahar can also be handy with the bat when required.

He picked up 2 wickets in the last match.

He is a right-arm fast bowler and is consistent in picking up wickets. Ngidi was a little expensive but picked up 3 wickets in the last match.

Dhoni is one of the best captains and finishers in the world. If he gets in the mood, then he can cause havoc in the death overs. Dhoni faced only 1 ball in the last match

He is one of the experienced players in IPL and is a consistent wicket-taker. Chawla bowled economically in the last match and also picked up 1 wicket.