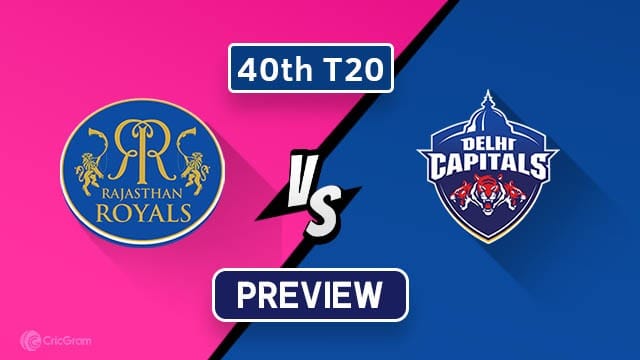 The 40th Match of Indian Premier League 2019 will be played between Rajasthan Royals and Delhi Capitals. We are covering RR vs DC Dream11 Team Prediction, Preview and Probable Playing XI for the T20 match. The match is to be played at Sawai Mansingh Stadium in Jaipur.

Rajasthan Royals are sitting on seventh position in points table with only three victories in nine encounters. They have to win all of their remaining matches to find a spot in play-offs. They defeated Mumbai Indians by 5 wickets in their last encounter. Bowling first, Shreyas Gopal took two crucial scalps and was supported by Archer and Binny to restrict Mumbai at 161. Gopal. Chasing the target, Steve Smith scored and Riyan Parag played crucial knocks of 59* and 43 respectively to easily chase the target. Sanju Samson also played a quick cameo of 35 runs in 19 balls opening the innings. Rajasthan Royals have finally found some momentum and will hope to get another victory defeating Delhi under the leadership of new skipper Steve Smith.

Delhi Capitals have finally made a mark in IPL with new name and are third on points table with six wins and four losses. They defeated KXIP by 5 wickets in last encounter. Bowling first, Sandeep Lamichhane took three wicket-haul while Axar and Rabada took two scalps each to restrict Punjab at 163. Chasing the target, Shreyas Iyer and Shikhar Dhawan played match-winning knocks of 58* and 56 respectively to chase the target comfortably. Delhi Capitals will be determined to continue the winning momentum and get another victory defeating Rajasthan Royals.

Jos Buttler has returned to England for personal reasons and will be unavailable for next few matches.

Rahul Tripathi was dropped in the last match. He can return in the playing XI replacing Ashton Turner. There is also a chance of Rahane being dropped after getting axed from captaincy.

Liam Livingstone can also get a chance in place of Turner.

Mahipal Lomror can replace expensive Jaydev Unadkat. Oshane Thomas can also get a chance if Turner vacant his overseas spot.

Sanju Samson and Ajinkya Rahane can open the innings. Steve Smith, Ben Stokes and Riyan Parag will handle the middle-order.

Ben Stokes, Stuart Binny and Riyan Parag will play the role of an all-rounder. Jofra Archer and Shreyas Gopal can also do big hitting.

Shreyas Gopal will be the key spinner along with Riyan Parag.

Jofra Archer and Dhawal Kulkarni will lead the pace attack along with J Unadkat and Stuart Binny.

Chris Morris was dropped in the last match due to a spin-friendly pitch of Kotla and can return in the XI replacing S Rutherford. Amit Mishra can also be replaced by Avesh Khan.

S Rutherford/C Morris and Axar Patel will play the role of an allrounder. K Rabada can also contribute with the bat.

Axar Patel and Sandeep Lamichhane will lead the spin attack while Kagiso Rabada and Ishant Sharma will be the key pacers.

If you liked RR vs DC Dream11 prediction, then follow us on Twitter for Latest Cricket News.