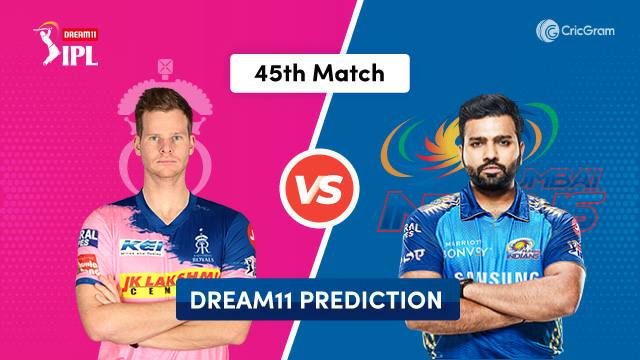 Rajasthan Royals are having a tough time this season as they are currently at the 7th position on the points table with four wins and seven losses and 8 points.

The batting of RR has been not up to the mark except for the starting two matches. All the batsmen have struggled in most matches to score runs freely, which has cost them most of the matches. The batting order has not been perfect, and they have tried to change it many times, and by the time they found the right order, it has been too late.

Jofra Archer has been brilliant with the ball as he has been consistently picking up wickets every match. Kartik Tyagi has been one of the best finds for RR this season, as he has been bowling at a perfect pace. Shreyas Gopal and Rahul Tewatia have also done an excellent job in the middle overs.

From this position, it will be difficult for RR to qualify for playoffs, but they still have chances if they win every match by a significant margin.

Mumbai Indians, playing brilliantly in the last match and winning the match by ten wickets, are back on to the points table with seven wins and three losses and a total of 14 points.

Ishan Kishan, after many matches, played well in the last match, scoring an unbeaten fifty. Surya Kumar Yadav at No.3 has been doing a decent job, which gives a license for the players like Hardik, Pollard, and Krunal to just hit the balls out of the park.

The bowlers have been doing a great job by picking up early wickets in every match. Trent Boult and Jasprit Bumrah have been in perfect form and troubled many batsmen this season. Coulter-Nile has also been bowling decently.

The spin duo Rahul Chahar and Krunal Pandya have been brilliant in the middle overs picking up crucial wickets and not allowing the batsmen to score runs quickly.

MI can easily qualify for playoffs, and they can now try other players who haven’t got a chance this season.

Average 1st Innings Score: 158 (From 14 games played at this venue so far in this season)

Average 2nd Innings Score: 147 (From 14 matches played at this venue so far in this season)

The pitch has appeared to be slowed down from the past few matches, and it has not been easy to score runs here. Bowlers will have the upper hand in the remaining games at this venue in the season.

Six out of the Fourteen matches have been won by the team batting first so far this season, which super over decided one game.

He is one of the top allrounders across the globe and has an IPL hundred to his name. Ben Stokes scored 30 runs and went wicketless in the last match. He is very good to pick in RR vs MI fantasy team.

He bats in the middle order and can play shots from the start. Buttler scored only 9 runs in the last match.

He is a right-arm fast bowler and can be handy with the bat down the order. In the last match, Jofra scored 16* runs and bowled well, picking up 2 wickets.

He is a right-handed batsman and bats according to the situation of the match. Steve Smith scored 16 runs in the last game.

He is an allrounder and equally good with both bat and ball. Tewatia scored 2* runs and went wicketless in the last match.

He bats in the middle order for RR and is a good striker of the ball. Samson batted decently, scoring 36 runs in the last match, and looking out of form this season.

He is a 19-year-old right-arm fast bowler and has made his debut this season. Tyagi was very expensive in the last match and also went wicketless.

Robin Uthappa has started opening for RR in the past few matches. He scored 19 runs in the last match.

He is the wicket-keeper batsman for the team and generally opens along with Rohit. Quinton scored 46* runs from 37 balls in the last match. He is very good Captain choice in RR vs MI Dream11 Team.

He is one of the best bowlers in the world. Bumrah bowled brilliantly, picking up two wickets in the previous match.

Boult is very dangerous and one of the top bowlers across the world. He is a left-arm bowler who can swing the ball early in the inning and controls the flow of runs in death overs. Boult bowled brilliantly, picking up four wickets for just 18 runs in his four overs in the last match.

He generally bats at NO.3 in the team. Surya did not get to bat in the last match.

He is a bowling allrounder and can play big shots down the order. Coulter-Nile picked up one wicket in the last match.

He is a match-winning allrounder and has performed for the team with both bat and ball. Pollard did not get to bat and bowled only one over in the last match.

He is a right-arm leg-break bowler and has been consistently picking up wickets this season. Chahar picked up two wickets in the last match.

He is one of the top allrounders in India. Hardik Pandya did not get to bat in the last match.