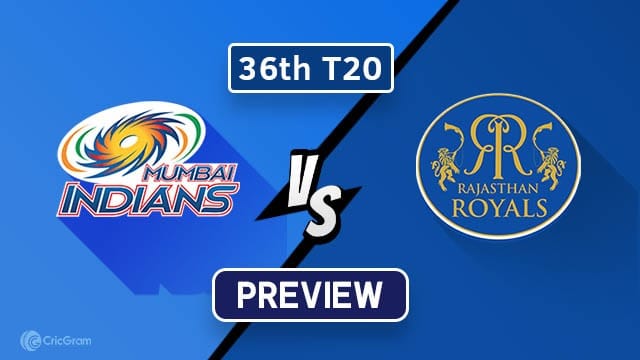 The 36th match of Indian Premier League 2019 will be played between Rajasthan Royals and Mumbai Indians. We are covering RR vs MI Dream11 Team Prediction, Preview and Probable Playing XI for the T20 match. The match is to be played at Sawai Mansingh Stadium in Jaipur.

Rajasthan Royals are seventh on the points table with only two wins in eight matches and are having a dreadful season as of now. They lost their last match to KXIP by 12 runs. Bowling first, Jofra Archer bowled lethal spell taking three crucial wickets to restrict Punjab at 182 but could not get support from other bowlers. Chasing the target, Rahul Tripathi played a good knock of 50 runs and was supported by Buttler, Rahane and Samson but none could convert into a match-winning knock. Quick 11-ball 33* from Stuart Binny led Royals to 170 but were left behind by 12 runs. Royals will hope for a unison effort from all players in upcoming matches and get into winning ways to stay alive in the tournament.

Mumbai Indians are having a good run in IPL’19 and are sitting on the second position in the points table with six wins and three losses. They won their last match against Delhi Capitals by 40 runs. Batting first, Rohit and Quinton De Kock gave a good start to the team on the slow track of Kotla scoring 30 and 35 respectively. Handy cameos from Hardik and Krunal led Mumbai to a good total of 168. Defending the target, Rahul Chahar and Jasprit Bumrah bowled match-winning spell taking three and two scalps respectively to restrict Delhi at 129. Mumbai Indians will be determined to take revenge for their previous loss to Rajasthan in IPL’19 and target top position in the points table.

Ben Stokes is suffering from a hip injury. If fit, He can replace Ish Sodhi. Ashton Turner is likely to get another chance in place of struggling Steven Smith.

Spin all-rounder Mahipal Lomror or Riyan Parag can replace Jaydev Unadkat if Ish Sodhi misses out in the playing XI.

Stuart Binny will play the role of an all-rounder. Jofra Archer and S Gopal can also do big hitting.

Jofra Archer and Dhawal Kulkarni will lead the pace attack while Shreyas Gopal will be the key spinner for Rajasthan. S Binny can also bowl few overs of medium pace.

Alzarri Joseph is injured and ruled out of the season.

Ishan Kishan was unfit to play in the last match. If fit, He will replace Jayant Yadav. Even Yuvraj Singh can get a chance.

Rohit Sharma will open the innings along with Quinton De Kock. Suryakumar Yadav, Ishan Kishan/Yuvi and Kieron Pollard will follow them.

Krunal and Hardik Pandya will play the role of an allrounder.

Jasprit Bumrah will spearhead the pace attack along with Malinga and Hardik Pandya.

Krunal Pandya and Rahul Chahar will be the key spinners.

If you liked RR vs MI Dream11 prediction, then follow us on Twitter for Latest Cricket News.