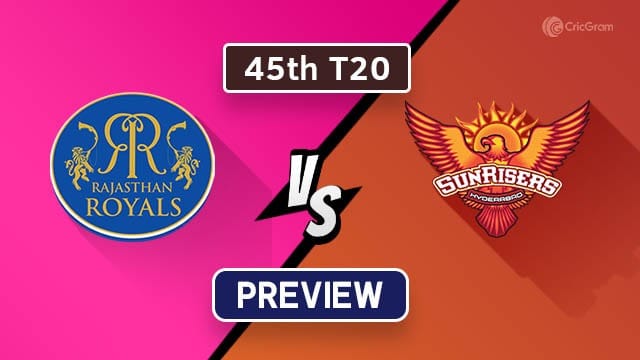 Rajasthan Royals and Sunrisers Hyderabad will be played 45th match of IPL at Sawai Mansingh Stadium in Jaipur. We are covering RR vs SRH Dream11 Team Prediction, Preview and Probable Playing XI.

Rajasthan Royals are seventh on points table with four wins and seven losses and are having a poor run this season. However, They won their last match against Kolkata Knight Riders by 3 wickets. Bowling first, Varun Aaron along with debutant Oshane Thomas and Shreyas Gopal bowled well to restrict KKR at 175. Chasing the target, Young Riyan Parag was the top performer for Royals scoring 47 runs and was supported by Rahane and Samson. Late cameos by Archer and Gopal ensured successful chase of target. Royals will have to win remaining three matches and hope other results go in their way to qualify for playoffs and will be keen to deliver their best performances in upcoming matches.

Sunrisers Hyderabad are fourth on points table with five wins and five losses. They lost their last match to Chennai by 6 wickets. Batting first, Warner scored another fifty while Manish Pandey played brilliant knock of 83 runs to give a target of 176. Defending the target, Bhuvneshwar bowled well taking one scalp and was supported by economical spells of Shakib and Khaleel but could not defend the target. Sunrisers Hyderabad will hope to bounce back and defeat Rajasthan to get a step closer to qualification in playoffs.

Pitch has behaved neutral providing equal support to batsmen as well as bowlers.

Ben Stokes and Jofra Archer have joined Jos Buttler back in England camp and will not feature in remainder of IPL’19.

Ashton Turner is likely to take the place of Ben Stokes despite of his three golden ducks. Spin all-rounder Liam Livingstone or Ish Sodhi will replace Jofra Archer in the playing XI.

Rahul Tripathi or Mahipal Lomror can also be given chance.

Sanju Samson and Ajinkya Rahane will open the innings. Steve Smith, A Turner and R Parag will handle the middle order.

Stuart Binny, Riyan Parag and Shreyas Gopal will play the role of all-rounder.

Oshane Thomas and Varun Aaron will spearhead the pace attack along with Jaydev Unadkat or D Kulkarni and Stuart Binny.

Shreyas Gopal will be the key spinner for Royals along with Parag.

Skipper Kane Williamson has rejoined SRH Camp while Jonny Bairstow has joined his national team for upcoming series against Pakistan. They will swap their places in XI.

Specialist Wicket-keeper W Saha or Shreevats Goswami will replace Deepak Hooda/Yusuf in the playing XI. Chances of Saha are more.

Siddharth Kaul is also likely to return in the mix replacing Sandeep Sharma.

Shakib Al Hasan is likely to get extended run in place of Mohammad Nabi.

David Warner and K Williamson/Saha can open the innings. M Pandey, Vijay Shankar and Yusuf Pathan/Hooda will follow them.

Vijay Shankar and Shakib Al Hasan will play the role of allrounder. Rashid and Bhuvi can also contribute with bat if needed.

Wriddhiman Saha or Shreevats Goswami can also open the innings with Williamson demoted to middle-order.

If you liked RR vs SRH Dream11 prediction, then follow us on Twitter for Latest Cricket News and Grand League teams.