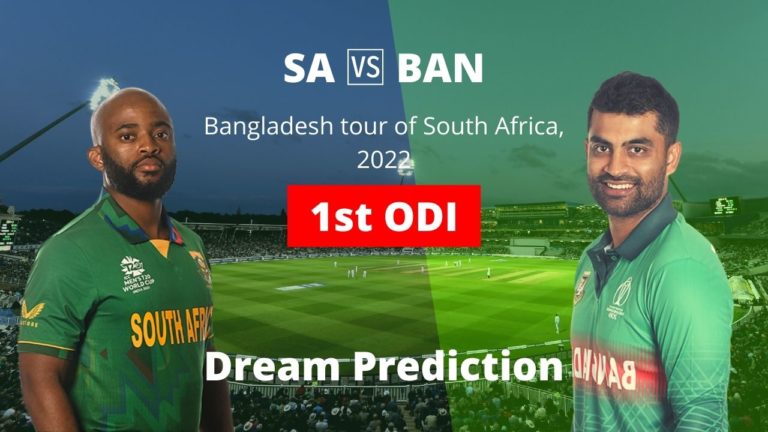 South Africa vs Bangladesh will play in the 1st ODI of the Bangladesh tour of South Africa 2022 at SuperSport Park, Centurion. We will cover SA vs BAN Dream11 Prediction, Probable Playing 11, and Fantasy Cricket Tips.

South Africa will start the series as the clear favorites. The hosts have an incredible record against the Bangladeshi team and are unbeaten at home in the last 20 years.

The Proteas have announced a full-strength squad for the ODI series and Cricket South Africa has also confirmed that players will leave for the IPL only after the ODI series. Their last ODI series was against India in January and registered a clean sweep.

Quinton de Kock and Rassie van der Dussen will be their key men with the bat. While, Kagiso Rabada and Tabraiz Shamsi will be the key with the ball in the whole series.

South Africa will fancy earning some solid World Cup Super League points in the series. They start as clear favorites and will look to dominate the visitors and take advantage of the conditions.

Bangladesh recently won their last ODI series against Afghanistan 2-1 at their home. They are a decent side with the ball and their batting will be under the radar in this series.

Though they don’t have some good numbers against the Proteas, Skipper Tamim Iqbal has said that there confidence is sky high and players are desperate to perform in the African conditions.

They too are with a full-strength squad. Shakib-Al-Hasan will be their key man with both bat and ball. Liton Das is in his top form and team will expect some good runs from him in this series.

Mustafizur Rahman will lead the bowling attack and can be lethal in these conditions. Bangladesh have nothing to lose in this series and will look play at their best and give a good fight to the home side.

(The average score is based on the 58 ODI matches played at this venue.)

The pitch at Centurion is expected to be a good wicket for batting and pace bowlers can also get some assistance from the pitch in the first 10 overs.

Spinners will also be a key on this ground and can pick up wickets in bulk in the middle overs. Anything above 280 can be expected if South Africa bat first.

He is one of their best batter and will open the innings. De Kock looked in very good form against India in the last series and also a very good choice for C and VC in SA vs BAN Dream11 Team.

He is likely to bat at 4 and will desperate to score in this series. Markram was average in the last series against India.

Rabada will be their best bowler as usual. He will bowl in the power play and the death and is another solid option for C and VC

Ngidi will bowl in the power play and death and is another solid pick. He was impressive in the last series.

He will bat in the middle order and score consistently. Van der Dussen is a must-have pick if SA bats first. He averages 74 in this format.

He was brilliant in the ODI series against India. Shamsi will bowl in the middle overs and is a must-have pick.

Malan will open the innings and is a very talented player. He can be a very good trump card pick in this game.

He is the skipper of the team and will bat at 3. Bavuma was in a good form against India and will be crucial if SA bat first.

He is one of the best All-Rounders on the team. Shakib will bowl 10 overs with the ball and also bat in the top order and is an excellent choice for C and VC in SA vs BAN Dream11 Prediction.

He is one of their best batsman and will open the innings. Iqbal was average in the last series and will be desperate to score in this game.

Liton Das will open the innings and is in excellent form. He scored a fantastic hundred in the last series.

He will bowl in the powerplay and death and is a must-have pick. Mustafizur bowled decently in the last series.

He is another very talented fast bowler. Islam will assist Fizz and can be a trump card pick in this game.

He is another very handy All-Rounder. Hasan will bowl 10 overs with the ball and also bat in the lower middle-order. He was fantastic in the last series.

Mushfiqur Rahim will be crucial in the middle-order. He is not in good form but is a very experienced player.