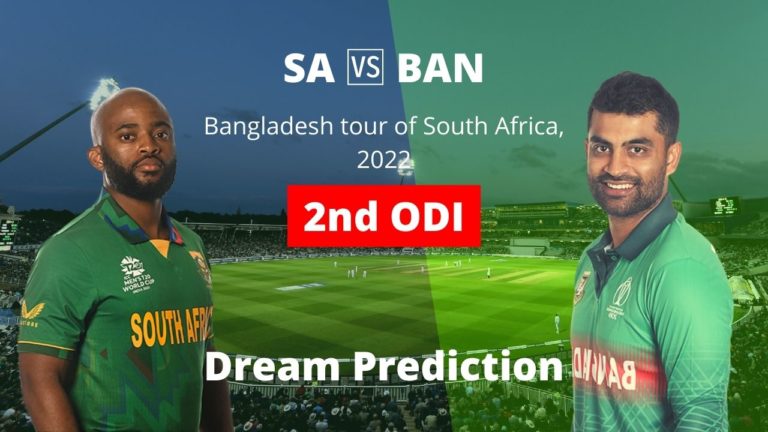 South Africa vs Bangladesh will play in the 2nd ODI of the Bangladesh tour of South Africa 2022 at the Wanderers Stadium, Johannesburg. We will cover SA vs BAN Dream11 Prediction, Probable Playing 11, and Fantasy Cricket Tips.

South Africa has faced their first ever defeat from Bangladesh on their home soil. Their bowlers were smashed all-around the park and the batters were also average in the 2nd innings.

Opting to bowl first, their bowlers were expensive in the first half and leaked runs. Marco Jansen and Keshav Maharaj were the top picks from the bowling department and picked up 2 wickets each.

With the bat, their Openers were dismissed cheaply. In the middle-order, Rassie Van Der Dussen and David Miller played some good knocks and scored 86 and 79 runs respectively.

They will be desperate to bounce back in this game and will hope for some better performances from the bowlers and also their top-order.

Bangladesh registered their first-ever win on the South African soil and won the game convincingly by 38 runs. They were clinical with both bat and ball.

Batting first, both their top order and middle order fired and posted a massive total of 314 runs. Shakib-Al-Hassan was the top scorer with the bat and scored 77 off 64 balls. Liton Das and Yasir Ali also batted well and scored fifties.

With the ball, their bowlers were also brilliant and bowled out the Proteas to a score of 276. Mehidy Hasan and Taskin Ahmed were the top picks from the bowlers and picked up 4 and 3 wickets respectively.

Bangladesh has a golden opportunity to register their first-ever series win against South Africa on their home soil and will be high on confidence after the last game.

(The average score is based on the 48 ODI matches played at this venue.)

The pitch at Wanderers is expected to be very similar to the pitch in the last game and the ball coming nicely on to the the bat. Both spinners and pacers can also get wickets by bowling on the right length and line. Anything above 280 can be expected by team batting first.

He is one of their best batter and will open the innings. De Kock looked in very good form against India in the last series. De Kock did not play the last game but if he plays, he is a very good choice for C and VC in SA vs BAN Dream11 Team.

He will bat in the middle order and scores consistently. Van der Dussen batted brilliantly in the last game and scored 86 runs and is must-have pick.

Rabada will be their best bowler as usual. He will bowl in the power play and the death. He bowled decently in the last game and picked up one wicket.

He is tall left-arm bowler and is very quick. Jansen can be lethal and picked up 2 wickets in the last game.

Ngidi will bowl in the power play and death and is another good pick. He picked up one wicket in the last game but was expensive.

He is likely to bat at 4 and will desperate to score in this series. Markram was out for a duck in the last game but is a very talented and skillful player and can be a trump card in this game.

Miller will do the finishing duties for the team. He batted brilliantly in the last game and scored 79 runs.

He was brilliant in the ODI series against India. Shamsi will bowl in the middle overs and is a must-have pick if he plays. He did not play in the last game.

Malan will open the innings and is a very talented player. He scored only 4 runs in the last game but can be a trump card pick in this game.

He is the skipper of the team and will bat at 3. Bavuma played decently in the last game and scored 31 runs.

He is one of the best All-Rounders on the team. Shakib batted brilliantly in the last game and scored 77 runs and is an excellent choice for C and VC in SA vs BAN Dream11 Prediction.

He is another very handy All-Rounder. Hasan will bowl 10 overs with the ball and also bat in the lower middle-order. He bowled superbly in the last game and picked up 4 wickets.

He is one of their best batsman and will open the innings. Iqbal also played decently in the last game and scored 41 runs.

Liton Das will open the innings and is in excellent form. He scored brilliant fifty in the last game and is a must-have pick.

He will bowl in the powerplay and death and is a must-have pick. Mustafizur went wicketless in the last game but can be crucial in this game.

He is another very talented fast bowler. Islam will assist Fizz. He also bowled very well in the last game and picked up 2 wickets.

Mushfiqur Rahim will be crucial in the middle-order. He is not in good form but is a very experienced player. Rahim scored 9 runs in the last game.