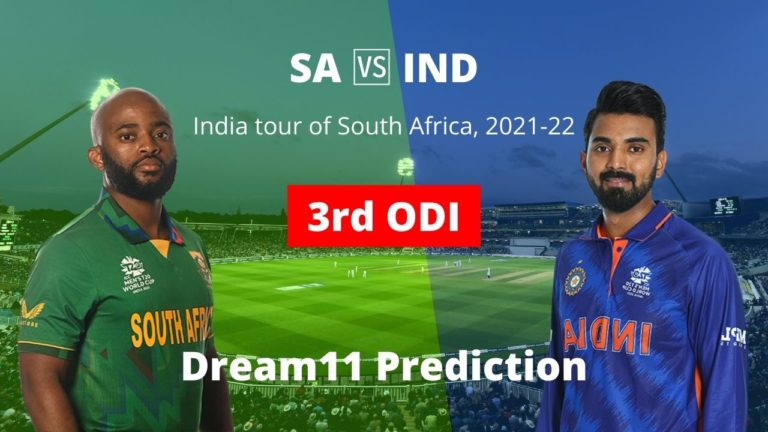 SA vs IND Dream11 Prediction, Probable Playing 11, and Fantasy Cricket Tips. South Africa and India will play in the 3rd ODI of the India tour of South Africa 2021-22 at the Newlands, Cape Town.

South Africa has been resilient throughout the tour and won the Test and ODI series.

Quinton de Kock has batted well this series and scored 78 runs in the last match, and Janneman Malan almost scored a century in the previous game. At No.3, Bavuma has provided momentum for the upcoming batters. In the end, Markram and Rassie van der Dussen performed well and finished the game for South Africa.

The bowlers performed well in this series and never allowed the opposition to play the shots freely. Shamsi has been the leading wicket-taker for the team. Magala, Markram, Maharaj, and Phehlukway picked up one wicket each in the last match.

South Africa would be looking to whitewash India in the ODI series.

India’s performance has deteriorated after the 1st Test match and has lost all the games.

Shikhar Dhawan has batted decently and scored a decent amount of runs this season, and KL Rahul scored a fifty in the last match. After scoring a fifty in the 1st game, Kohli was out for a duck in the previous game, but Rishab Pant batted brilliantly, scoring 85 runs. Once again, Shreyas Iyer and Venkatesh Iyer couldn’t contribute much. In the end, Shardul Thakur batted well, scoring 40 runs.

The Indian bowlers have performed poorly in this series as they have failed to pick up wickets in both matches. Bumrah has been the consistent wicket-taker for India. Yuzvendra Chahal and Shardul Thakur picked up one wicket each in the last game.

India would be hoping to avoid the humiliation of getting whitewashed by winning the final match of the series.

(The average score is based on forty-four matches played at this venue.)

The pitch at Newlands Park is neutral, providing a good batting surface in the 1st inning, the pitch slows down later, and the bowlers will have an advantage.

(The team batting first has won twenty-nine out of the forty-four matches played at this venue.)

SA vs IND Head to Head

Quinton opened the innings in the last match and batted well, scoring 78 runs from 66 balls.

In the last match, Malan made a good comeback and batted brilliantly, scoring 91 runs.

He is a right-hand batsman and is a part-time right-arm off-break bowler. Markram scored 37* runs and picked up a wicket in the last game.

Rassie is brilliant this series and scored 37 runs in the last match. He is the leading run-scorer this series.

Skipper Bavuma is the 2nd highest run-scorer in this series and scored 35 runs in the last game.

Shamsi is the leading wicket-taker in this series and picked up two wickets in the last game.

Phehlukwayo has bowled well this series and picked up a wicket in the last match.

Virat Kohli is in good form in the ODI format but was out for a duck in the last match.

Dhawan is the highest scorer for India this series and scored 29 runs in the last match.

Bumrah has been in brilliant form and picked up a wicket for 37 runs in his ten overs in the last match.

Shardul Thakur has been batting well, scoring 40 runs in the last match and picking up a wicket.

Ashwin scored 25* runs but was slightly expensive and went wicketless in the last game.