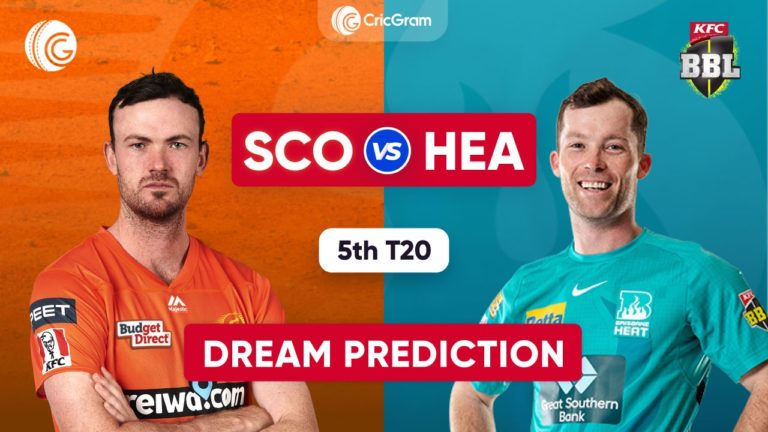 Perth Scorchers and Brisbane Heat will play in the 5th match of the Big Bash League 2021-22 at Perth Stadium, Perth. We will cover SCO vs HEA Dream11 Prediction, Probable Playing 11, and Fantasy Cricket Tips.

Perth Scorchers are one of the most successful teams as they have won the title thrice and were the runner-up in the last season.

The pace trio Andre Tye, Jason Behrendrorff, and Matt Kelly will play a crucial role in the bowling attack, and Ashton Agar will be the key spinner in the team.

Scorchers would want to improve from the last season and win the title this year.

Brisbane Heat had to face disappointment in the first match of the season as they lost by seven wickets.

Chris Lynn and Max Bryant opened the inning but got out early without scoring much. Duckett and Heazlett batted well and stabilized the inning in the middle but missed their fifties. In the end, Xavier Bartlett scored some quick runs and helped the team reach a fighting total.

The bowling unit failed to impact the last match as they could not consistently pick up wickets. Liam Guthrie and Xavier Bartlett managed to pick up two and one wickets, respectively.

Heat needs to improve in all the aspects of the game, or it would be tough to win the matches for them.

The pitch provided a good batting surface in the first innings and allowed the batsmen to play freely, but in the second innings, it slows down, and the batting gets tougher, and the bowlers can pick up wickets easily.

The average total score is 148 runs, and the team batting first has won most of the matches at this venue in the last BBL.

SCO vs HEA Head to Head

Munro is a left-handed batsman and opens the innings. He performed well in the last season, scoring 443 runs, and is a good choice for C and VC for the SCO vs HEA Dream11 team.

Andrew Tye is a right-arm fast bowler and can be handy with the bat down the order and picked up 21 wickets in the last season.

Behrendorff is a left-arm fast bowler and picked up 16 wickets last season.

Agar is a bowling all-rounder, but he hasn’t got enough success in BBL. He did not play the last season.

Bancroft is a talented batsman and scored 156 runs at an average of 39 in the last season.

Skipper Turner generally plays in the middle-order and plays big shots. He scored 228 runs in the last season.

Chris Lynn opened the innings and scored only nine runs, but he is a good pick as C or Vc in the SCO vs HEA Dream11 team.

Duckett made his BBL debut in the last match and batted well, scoring 46 runs in his debut.

Heazlett is a middle-order batsman and batted sensibly in the last match, scoring 42 runs from 37 balls.

Bryant opened the innings along with Lynn and struggled to score runs as he managed to get five runs in 11 balls.

Bartlett is a young right-arm fast bowler and can also play big shots down the order. He scored 26* runs and managed to pick up one wicket.

Wildermuth performed poorly in the last match as he scored only one run, went wicketless, and was expensive with the ball.

Mujeeb bowled well in the last match, conceding only 25 runs in his four overs but went wicketless.

Guthrie is a left-arm fast bowler and was expensive in the last match but managed to pick up two wickets.