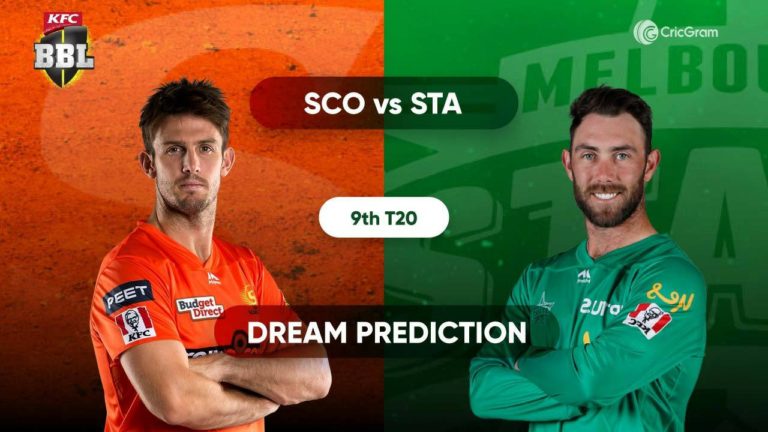 Hello and welcome to our SCO vs STA Dream11 Prediction, Probable Playing XI, and Fantasy Cricket Tips. Perth Scorchers and Melbourne Stars will clash against each other in the 9th match of the Big Bash League 2020-21 at Aurora Stadium, Launceston.

The Perth Scorchers had to face disappointment as they lost their first match of the season by seven wickets and are currently at the bottom of the table.

Both the openers Josh Inglis and Colin Munro had to face disappointment as they both got out early in the innings, and the pressure increased on the middle order. All-rounder Mitchell Marsh played after recovering from the injury that happened in IPL but did not appear to be in the right touch.

Ashton Turner played a quick innings scoring 24 runs, but he too got out without finishing the innings, and the young bowler Aaron Hardie scored 33 runs, which helped Scorchers post a decent total in the end.

Jhye Richardson and Fawad Ahmed managed to pick up wickets in the bowling department, and all other bowlers went wicketless and gave away runs. Scorchers need to improve their overall performance and bounce back into the tournament and climb up the points table.

Marcus Stoinis, after a disappointing performance in the first match, played brilliantly in the second match scoring a quick half-century and was also the top scorer of the innings. Maxwell came to bat at No.3 in this match and played his part by scoring runs quickly. In the end, Ben Dunk and Nick Larkin finished the innings at a good total for the Stars.

The bowlers continued their brilliant performance from the first match as they did an excellent job of defending the total. It looked as if Stars would lose the game at some point in the game, but Adam Zampa and Liam Hatcher picked up the crucial wickets, and Stars won the match comfortably by 22 runs.

Stars would want to continue their winning momentum, but winning three matches in a row in the season.

Average 1st innings score: 146 (based on the one match played here so far this season)

Average 2nd innings score: 147 (based on the 1 match played here so far this season)

The pitch here is generally considered good for batting, and bowlers can also pick up wickets if they bowl at the right line and lengths. On the whole, the pitch is equally balanced for both batsmen and bowlers.

The weather will be mostly cloudy, and there is a chance of rain on the match day.

He is a brilliant batting all-rounder but is expected to only contribute only with the bat for some matches this season. Marsh scored only 17 runs from 18 balls in the last game.

Colin Munro is a player to watch out for this season and opens the innings for his team. He was out for a duck in the last match and is yet to play big innings in BBL.

Josh Inglis is a hard-hitting wicketkeeper-batsman and will open for his side and provide an excellent start to his team. He scored only nine runs in the last match.

He is a Right Arm medium-fast bowler. Tye scored 15 runs in the last match but went wicketless.

Jhye Richardson is one of Australia’s best domestic bowlers and has a bit of international experience under his belt. Richardson bowled very well, picking up two wickets for just 20 runs.

He is a right-arm leg-break bowler and consistently picks up wickets. Fawad bowled decently in the last match, picking up a wicket.

He is a young bowling all-rounder. Hardie batted decently, scoring 33 runs but went wicketless in the last match.

Maxwell is a batting all-rounder known for playing big shots and has a strike-rate of over 150. He can also bowl a few overs of spin if required. Maxwell scored 39 runs and went wicketless in the last match.

He is a batting all-rounder and can also bowl a few overs of medium pace. Stoinis batted brilliantly, scoring 61 runs from 37 balls in the last match.

Coulter-Nile is a bowling all-rounder and can also be quite handy with the bat down the order. He did not play the last match.

He bats at No.3 and is a good striker of the ball. Cartwright played scored only nine runs but managed to pick up two wickets in the last match.

He opens the innings along with Stoinis and can play big shots from the start of the innings. Fletcher scored 12 runs and went wicketless in the last match.

He is a right-arm fast bowler and bowls at a perfect pace. Hatcher bowled brilliantly, picking up three wickets in his 1st match of the season.

He is a wicket-keeper batsman and generally bats in the middle-order. Dunk scored 16 runs in the last match.