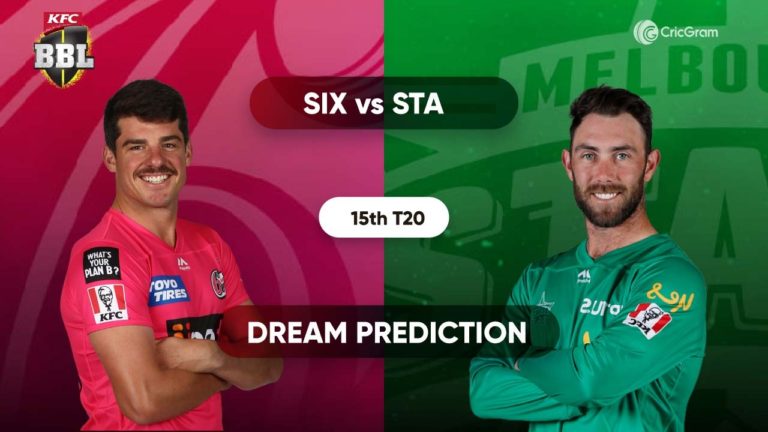 Hello and welcome to our SIX vs STA Dream11 Prediction, Probable Playing XI, and Fantasy Cricket Tips. Sydney Sixers and Melbourne Stars will be played in the 15th match of the Big Bash League 2020-21 at Carrara Oval, Queensland.

The Sydney Sixers have performed decently so far as they have won 2 out of 3 matches and are currently at 4th position on the points table with a total of 5 points. In the last game, Sydney Sixers performed brilliantly and won the match comfortably by 38 runs.

But their skipper Daniel Hughes and Dan Christian batted brilliantly in the middle overs and helped the team reach a good total. While Hughes just fell short of a half-century, Christian scored a fifty from only 16 balls.

The bowlers performed well again by restricting the opposition to a low score and winning the match comfortably. Manenti, Brathwaite, and O’Keefe bowled well by picking up two wickets each and did not allow the batsmen to score freely.

Sixer would be very high on confidence after their performance in the last two matches and would want to continue the same thing against the Melbourne Stars, but it is a challenging task

Marcus Stoinis and Andre Fletcher have been giving a decent start in the batting, and Stoinis has already scored a fifty in this season. The middle-order looks strong with players like Glenn Maxwell, Nicholas Pooran, and Ben Dunk.

The bowling attack also looks to be equally strong, with Billy Stanlake, Nathan Coulter-Nile, and Liam Hatcher being the pace attack. They have been very well accompanied by leg-spinner Adam Zampa who is a consistent wicket-taker.

Stars have not played a single match for the last nine days, but they would want to continue their winning streak by winning against equally strong Sydney Sixers.

Not many matches have been played at this venue so far, but we can say that it’s a decent pitch for both batsmen and bowlers by going by previous year’s performances.

The weather will be clear skies, and there is no chance of rain on the match day.

Josh Philippe will open the innings for his side and will look to play attacking cricket in the powerplay. In the last match, he scored only 6 runs from 12 balls.

He generally bats at No 3 for his team and is a player who can strike the ball very well. James Vince scored 19 runs in the last match.

Ben Dwarshuis is a brilliant bowler who can pick crucial wickets for his team in the powerplay and the death. In the last match, he went wicketless.

He is a bowling all-rounder. Jason Holder scored 11* runs but was very expensive with the ball and went wicketless in the last match.

Dan Christian is a complete all-rounder who will bowl his 4 overs in the middle and death overs and do his team’s finishing duties with the bat. He scored 50* runs from just 16 balls in the last match and picked up a wicket.

He is a hard-hitting all-rounder who is equally god with the bat and ball. Brathwaite did not get to bat but bowled well, picking up two wickets for 23 runs in his 4 overs.

He is a left-arm orthodox bowler and is consistent at picking up wickets. Steve bowled well in the last match, picking up two wickets for just eight runs in the previous game.

Skipper Hughes is a left-handed batsman and plays according to the situation of the match. In the last match, he scored 46* runs from 41 balls.

Maxwell is a batting all-rounder known for playing big shots and has a strike-rate of over 150. He can also bowl a few overs of spin if required. Maxwell was very expensive in the last match but did not get to bat.

He is a batting all-rounder and can also bowl a few overs of medium pace. Stoinis got out for just 4 runs in the last match.

Coulter-Nile is a bowling all-rounder and can also be quite handy with the bat down the order. He went wicketless the last match.

He is a left-hand batsman. Nicholas Pooran is very good player of T20 and can play big shots.

He bats at No.3 and is a good striker of the ball. Cartwright was very expensive with the ball and did not get to bat in the last match.

He is a right-arm fast bowler and bowls at a perfect pace. Hatcher bowled brilliantly, picking up two wickets in the last match.

He opens the innings along with Stoinis and can play big shots from the start of the innings. Fletcher scored 6* runs in the last match.

He is a right-arm leg-break bowler and bowls brilliantly in the middle overs, and pick up wickets at a crucial time. Zampa did not play the last match.