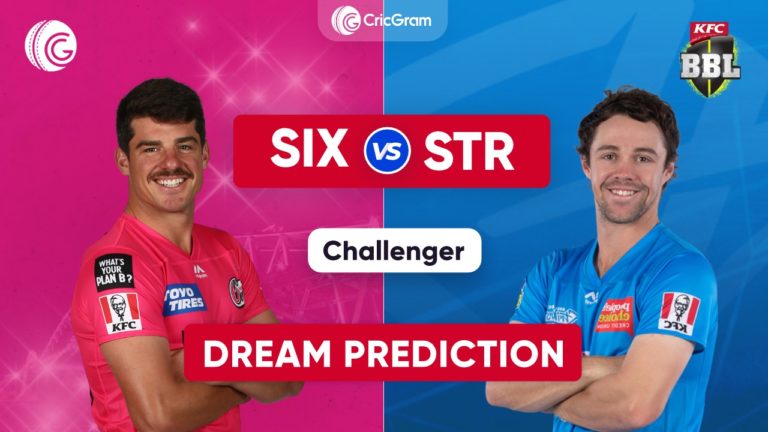 Sydney Sixers vs Adelaide Strikers will play in the Challenger game of the Big Bash League 2021-22 at Sydney Cricket Ground, Sydney. We will cover SIX vs STR Dream11 Prediction, Probable Playing 11, and Fantasy Cricket Tips.

Sydney Sixers finished at the 2nd position on the Big Bash League points table but lost the Qualifier and will face Adelaide Strikers in the Challenger.

Josh Philippe performed well at the beginning of the season but looked out of form recently, and Avendano was out for a duck in the last match. Skipper Henriques batted plodding, and other players like Jordan Silk, Nicholas Bertus, Daniel Christian, and Sean Abbott got out for a single-digit score. Ben Dwarshuis batted brilliantly, scoring 66 runs from 29 balls but couldn’t win the match.

Only a couple of bowlers bowled well in the last match. Hayden Kerr picked up two wickets, and Steve Okeefe got one wicket. The remaining bowlers conceded runs and went wicketless.

Sydney Sixers need to regroup as this is their last chance to qualify for the Final.

Adelaide Strikers have won six consecutive matches and have qualified to the Challenger this season.

Alex Carey and Matthew Short are in good form and consistently provide a good start. At No.3, Ian Cockbain batted brilliantly and scored a fifty. Wells, Renshaw, and Kelly played cameos and helped the team reach a good total in the last game.

The bowlers have been a significant strength and bowled well in a challenging situation in the last game. This season, Skipper Peter Siddle is in tremendous form, and Harry Conway has picked up wickets consistently. Matthew Short and Henry Thornton picked up one wicket each.

Strikers are in great form and would like to continue the momentum and qualify for the Finals.

(The average score is based on last five matches played at this venue.)

The pitch at SCG provided high-scoring games in the initial matches of the season but has been relatively slow in the recent games. The wicket is batting friendly and we can expect 1st innings score 170-190 runs.

(The team batting first has won three out of the five matches played at this venue this season.)

SIX vs STR Head to Head

Abbott is one of the crucial players on the team but went wicketless in the last match.

Skipper Henriques has scored runs consistently but scored 17 runs from 30 balls in the last match.

Hayden Kerr is the leading wicket-taker for Sixers and picked up two wickets in the last match.

Dwarshuis has performed well in the recent matches but went wicketless in the last game and scored 66 runs.

Christian is a brilliant all-rounder but scored only seven runs and went wicketless in the last match.

Steve is a left-arm orthodox bowler and picked up a wicket in the last match.

Short has been batting brilliantly in the recent matches and scored 39 runs from 28 balls and picked up a wicket. Matthew Short is very good Captain choice in SIX vs STR Dream11 Team.

Carey is in brilliant form and scored 23 runs from 14 balls and provided a good start.

Skipper Siddle has picked up the highest wickets this season and was expensive in the last match but picked up two wickets.

Cockbain is in terrific form this season and scored 65 runs from 38 balls in the last match.

Thornton was very expensive in the last match but managed to pick up a wicket.

Conway is a right-arm medium-fast bowler and picked up two wickets in the last match.

Fawad bowled decently in the last game but went wicketless.