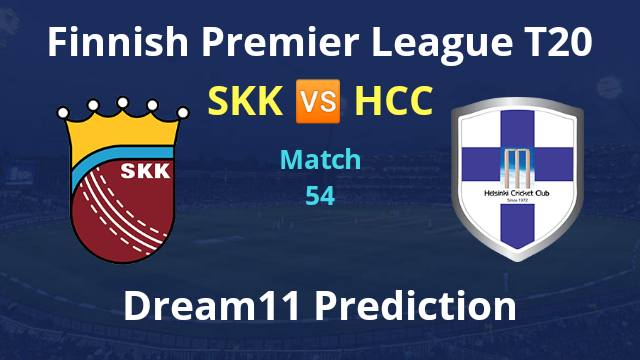 SKK is coming with a fantastic victory on their back from the previous game. They defeated Gym Helsinki Gymkhana by seven wickets. They chased the target withing 19 overs on the back of their in-form batsmen. Nathan Collins emerged as the Man of the Match as he scored a brilliant half-century. Later on, Atif Rasheed also played a vital knock of 30 runs off 12 balls.

There bowling also looks streamlined with the likes of Waqas Raja, Qaiser Siddique, and Atif Rasheed. They restricted the opponent at a minimum score that gave much-needed confidence to their batsmen, who came out with full power and dismantled opponents bowling unit.

HCC also did a great job in the previous outing as they managed a win by 24 runs. In that game, Aniketh Pushthay played a captain’s knock, who scored 53 runs off 42 balls studded with five boundaries. Zahidullah Kamal and Abdul Wahid Qureshi also played some excellent knocks that saved the game for HCC.

In bowling, Adnan Syed and Maneesh Chauhan took two wickets each. They bowled with discipline due to which their opponent failed to chase the target in stipulated 20 overs. HCC will expect their bowlers to come out with yet another fruitful performance.

Peter Gallagher has regained his form with the bat as well as with the ball. Thus far, he has taken 12 wickets and scored 215 runs. He will be a great pick for a fantasy team.

Rasheed is currently one of the top form players in this tournament. He has done well with the bat in the middle-order for SKK. Meanwhile, he is equally dangerous with the ball. He should not be ignored while picking a fantasy team.

Goodwin has given some breakthrough performances for his team in this tournament. He has well contributed with the bat and ball. So far, he has scored 131 runs in 9 games.

Collins scored a match-winning half-century in the last game. He is in top form as an opener and can win any match for his team. He is currently the leading run-scorer with 302 runs in 12 innings for SKK.

J. Obrien is a top-order batsman, who is making the mockery of the bowlers in the games. He likes to dominate the bowlers, and he has managed to do so in this season. He has managed 166 runs in 8 innings for SKK.

He is a match-winning bowler, who has bowled brilliantly in the ongoing Finnish Premier League 2020. Thus far, he has managed 9 wickets in 9 games.

P. Vijendran is an amazing middle-order batsman, who has muscled 109 runs in 7 innings for his team.

He is a dangerous all-rounder, who has produced match-winning performance in the ongoing T20 tournament. So far, he has scored 198 runs and grabbed 10 wickets.

He didn’t play well in the last outing. But, his amazing form with the willow cannot be ignored. So far, he has scored 268 runs in 10 innings and taken 5 wickets.

A. Pushthay pulled off a match-winning half-century for his team in a previous game. He is turning out to be a big match-winner for HCC and scored 262 runs in 10 innings.

Z Kamal can turn the phase of any game on the back of his bowling. He should be picked in a fantasy team.

He was not picked in the final XI of HCC in the last game due to unknown reason. However, his form with the bat makes him an essential player of the team. And, the chances are high that he will take the field in the upcoming game.

He has established his place in the team on the back of his match-winning bowling in the ongoing Finnish Premier League 2020. So far, he has grabbed 8 wickets in 11 games for his side.

He took two wickets with the ball in the previous game for HCC and played a vital role in the victory of his team. Maneesh Chauhan will be a bowler that can be picked in a fantasy team.

He has certainly gained his excellent form in his batting. And, it is good news for Helsinki CC. Zahidullah Kamal has managed 167 runs in 10 games for HCC.