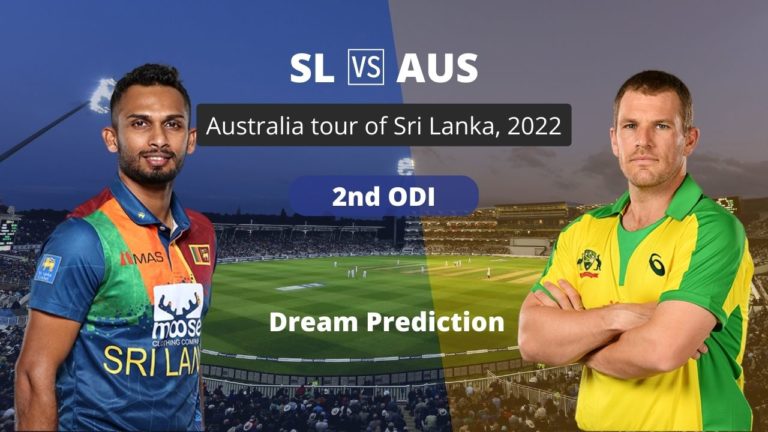 Sri Lanka vs Australia will play in the 2nd ODI match of the three match ODI series at the Pallekele International Cricket Stadium, Pallekele.

Sri Lanka had to face defeat in the first ODI but gave a tough fight to the visitors. They were brilliant with the bat and were also decent with the ball but in the end lost the game by 2 wickets.

With the ball, Wanindu Hasaranga was again brilliant in the middle-overs and picked up 4 wickets. Dunith Wellage and Maheesh Theekshana also bowled very well and picked up 2 and 1 wickets respectively.

Australia have started the series with a winning note and will look continue the same in this game. They were expensive with the ball but showed their class with the bat and chased down the total.

Bowling first, their bowlers were expensive and failed to pick up wickets regularly. Ashton Agar bowled very well in the middle-overs and picked up 2 wickets. Josh Hazlewood and Jhye Richardson also bowled decently and picked up one wicket each.

With the bat, Skipper Aaron Finch and Steve Smith batted very well at the top and scored 44 and 53 runs respectively. Marcus Stoinis also played a decent knock of 44 runs in the middle-order. In the end, it was Glenn Maxwell who played a match-winning knock of 80* runs and helped his team cross the line.

Australia will be high on confidence coming into this match and will look to seal the series in this game.

The pitch in the last match looked very good to bat and the outfield was also very fast. The team batting first would look to post a total of 280+. Winning the toss and batting first will be ideal.

The live streaming of Sri Lanka vs Australia, 2nd ODI will be available on the Sony Sports Network and also on the Sony Liv app.

You can also catch the live commentary, scorecard, and latest updates of the 2nd ODI match between SL vs AUS by clicking here SL vs AUS Live Score.

SL vs AUS Head to Head

He will be their key player at the top. Nissanka batted very well in the last game and scored 56 runs.

He is a left-handed batsman and will bat in the middle-order and can also be bowl if needed. C Asalanka was decent in the last game and scored 37 runs. He is very good pick in SL vs AUS Dream11 Team.

He is their main bowler and will bowl in powerplay and death. Chameera went wicketless in the last game and was expensive.

He is the skipper of the team and will contribute with both bat and ball. Shanaka failed with the bat in the last game but picked one wicket with the ball.

He is a right-arm off-break bowler and will bowl in the middle-overs. Theekshana bowled decently in the last game picked up one wicket.

He is right-handed batsman and will bat at 3 or 4. Mendis looked very good in the middle-order and scored 86* runs.

He needs no introduction and is one the best batsman in this format. Warner scored a duck in the last game but is a very talented player and is still a very good choice for C and VC in SL vs AUS Dream11 team.

He will bat in the middle-order and can also bowl a few overs with the ball. Maxwell was brilliant in the last game and scored 80* runs.

He is likely to bat at 4 and is a very talented player. Labushagne picked up 2 wickets with the ball and also scored 24 runs with the bat.

He is likely to bat at 3 and is a world-class player. Smith batted very well and scored 53 runs.

He will bowl in the powerplay and death. J Hazlewood bowled decently in the last game and picked up one wicket.

He is the skipper of the team and will open the innings. Finch played decently in the last game and scored 44 runs.

He is a right-arm fast bowler and will bowl in the powerplay and death. Cummins was average in the last game and went wicketless.

He will is a right-arm leg spinner and will bowl in the middle overs. Swepson did not play the last game but is likely to play in this game and can be a trump card.

He will contribute with both bat and ball. Shanaka failed with the bat in the last game but can be a trump card in this game and has less selection.