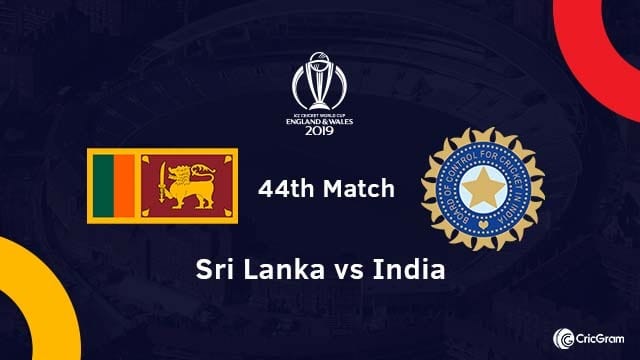 Sri Lanka and India will face-off in the 44th match of World Cup’19 at Headingley in Leeds. We will provide SL vs IND Dream11 Team Prediction, Preview and Probable Playing XI for the match.

Sri Lanka is sixth on the points table with three wins in eight matches and is out of the race for semis. Their batsmen except for Kusal Perera and Avishka Fernando have failed to perform consistently throughout the tournament while bowlers except Malinga have been unable to chip in with regular wickets. They will expect for a unison effort from all players tomorrow in order to give a tough challenge to the mighty India team and end the tournament on a good note.

In the last encounter, They defeated Windies by 23 runs. Batting first, Young and talented Avishka Fernando scored an attacking century and was supported by Kusal Perera who scored 64 runs in just 51 balls. In addition, Lahiru Thirimanne also scored 45* runs in 33 balls to take the team to a total of 338. In defense, Lasith Malinga took another brilliant three wicket-haul to successfully defend the target.

Team India is one of the strong contenders for World Cup’19 and has performed brilliantly till now. They have won six of their seven completed matches and have already qualified for the semis. India’s top-order has been in brilliant form along with Hardik Pandya and MS Dhoni while bowlers Bumrah, Shami, Bhuvi and Chahal have bowled well with Shami leading from the front taking thirteen scalps in four encounters. They will be eager to defeat Sri Lanka and end on the top of the points table.

In the previous encounter, They defeated Bangladesh by 28 runs. Batting first, Rohit Sharma scored his fourth century of WC’19 and was supported by Lokesh Rahul who scored 77 runs. Rishabh Pant and MS Dhoni scored attacking cameos of 48 and 35 to take the team to a total of 314. With a bowl, Jasprit Bumrah took lethal four wicket-haul while Hardik Pandya took three scalps to defend the target successfully.

Pitch will be neutral and provide assistance to pacers in initial overs and then support batsmen. Spinners can also find some support in second innings.

Thisara Perera can replace Kasun Rajitha while Jeevan Mendis can take the place of Jeffrey Vandersay in the playing XI. Suranga Lakmal can also get a chance.

Dhananjaya De Silva will play the role of an allrounder. Isuru Udana can also support with the bat.

Lasith Malinga and Isuru Udana will lead the pace attack while Dhananjaya De Silva will be the key spinner. Avishka Fernando can also bowl a few overs of medium pace.

After Shikhar Dhawan, Vijay Shankar has also been ruled out of WC’19 due to injury. Mayank Agarwal has been announced as the replacement.

Hardik Pandya will play the role of an allrounder.

Jasprit Bumrah, Bhuvi, and Mohammad Shami will lead the pace attack along with Hardik Pandya while Yuzvendra Chahal will handle the spin attack.

Anyone among Kedar Jadhav or Ravindra Jadeja is likely to take place of Dinesh Karthik in the playing XI. Chances of Jadeja are more.

Rishabh Pant is a talented and attacking batsman and can score quick runs in the middle order. He scored 32 and 48 runs in two encounters.

Kusal Mendis has got starts of 46, 23 and 39 runs in the last three matches but has been unable to convert into a big knock. He has the talent to play a big knock on his day and can be a grand league pick in IND vs SL Dream11 team.

Dinesh Karthik is an attacking finisher but has fewer chances to play tomorrow and will be a risky pick.

KL Rahul will open the innings and can change the course of match single-handedly. He scored 57, 30, 48, 0 and 77 runs in five matches opening the innings.

Avishka Fernando has performed exceedingly well for Sri Lanka in limited chances in international circuit and displayed his talent scoring pressure releasing 49, 30 and 104 runs in his three encounters of WC’19. He can also bowl a few overs of medium pace.

The skipper of Sri Lanka Dimuth Karunaratne has starred with the bat for Sri Lanka. He has scored 212 runs in six matches including 97 against Australia but failed in the last three matches. He is a technically strong batsman.

Angelo Mathews failed miserably in initial matches and has two duck to his name but scored 85* runs against England. He is the most experienced batsmen of the team and has a great record against India and averages excess of 50 against them.

Lahiru Thirimanne played at an unusual place in the last match but scored a good attacking knock of 45* runs. He can be a grand league pick in IND vs SL Dream11 team.

Kedar Jadhav scored crucial 52 runs against Afghanistan. He can also chip in with a few overs if required. He can play tomorrow.

All-Rounders for IND vs SL Dream11:

Hardik Pandya is the X-factor of team India. He can hit big sixes along with lethal bouncers. He scored attacking 17*, 48, 26, 7, 46, 45 and 0 in seven matches and also has also taken eight scalps till now.

Dhananjaya De Silva is a technically strong batsman and can also bowl a few overs of spin. He took three wicket-haul and scored 29 runs against England.

Thisara Perera has been in poor form from the past few months. He can be handy with the bat as well as ball and is the X-factor of Sri Lanka team but failed in all matches. He may play tomorrow.

Jeevan Mendis has failed miserably in three matches he has played and can be risky tomorrow.

Jasprit Bumrah is one of the best pacers in world cricket and is a wicket-taking bowler in initial, middle as well as death overs. He has taken fourteen scalps in seven encounters.

Mohammad Shami is in lethal form and has taken fifteen scalps in four encounters including two four-wicket hauls and one five wicket-haul.

Lasith Malinga can trouble batsmen with his yorkers and slow balls. He has taken twelve scalps in six matches and will be eager to put a good show in his last match of World Cup.

Bhuvneshwar Kumar can be lethal in initial overs with his swing and can also trick batsmen with his skills in death overs. He took one scalp in the last encounter against Bangladesh.

Isuru Udana is death over specialist and can also play quick cameos with the bat. He failed in the first two matches but took two wickets against Australia and England.

Yuzi Chahal has been the best spinner for India taking eleven scalps in seven matches including a four-wicket haul against South Africa.

Kasun Rajitha has performed well for Sri Lanka in domestic cricket and took one scalp against West Indies.

Kuldeep Yadav can trouble batsmen with his witty spin. He has taken only five scalps till now and is not in his best form. He is unlikely to play tomorrow.

Jeffrey Vandersay is a good leg-spinner but failed to put a good show in the last match. He may play tomorrow.

Suranga Lakmal can also trouble batsmen with his swing in overcast conditions. He is yet to take a wicket in WC’19 and is in poor form. He is unlikely to play tomorrow.

If you liked India vs Sri Lanka Dream11 Prediction, Then follow us on Telegram for Dream11 Team and Fantasy Cricket Tips. You can also find us on Twitter. What is your Captain and Vice-captain choice of Dream11 Team? Comments, please.