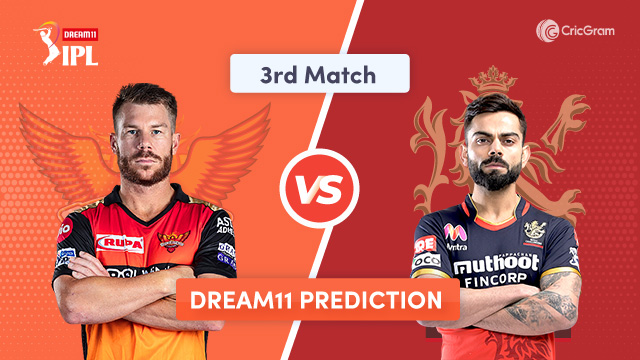 Sunrisers have a trophy to their name, but it was way back in 2016, and they would be very eager to win the trophy this year. They had a decent tournament last year as they finished at the 4th position on the points table.

Hyderabad team has one of the best bowling attacks in IPL with players like Bhuvneshwar Kumar, Khaleel Ahmed, Sandeep Sharma, Rashid Khan, and Mohammad Nabi. They also have some outstanding batsmen at the top who can smash the bowlers around the park.

RCB is one of the most excited teams every year in IPL, but they haven’t match fans’ expectations until this season. They always had an excellent squad, but they couldn’t manage to win the trophy.

They were runner ups in the 9th season, but after that, they had terrible seasons as they finished at the 8th position twice on the points table. But this team they look confident of making it to the playoffs and eventually winning the trophy.

The pitch here is considered neutral and bowling first team have an advantage because dew comes in 2nd innings.

There is a help for the seamers in initial overs, so the team winning the toss would want to bowl first as the due becomes a significant factor in the 2nd innings.

Skipper Warner is one of the best batsmen in the history of IPL. He has a strike rate of over 140 and also has 4 centuries to his name.

He opens the innings for SRH along with Warner and made his debut last season. Bairstow played very well last season and has already scored a century.

Williamson is a good striker of the ball and generally bats at NO.3. He has captained SRH in the absence of Warner and almost went on to win the trophy.

He generally bats in the middle order and is known for playing according to the match’s situation. Pandey was the 1st Indian player to score a hundred in IPL.

He is an all-rounder and can also play some big shots down the order. Nabi has looked in good form in the recently concluded in CPL.

He is a right-arm leg spinner and is consistent in picking up wickets. Rashid is also very good at controlling the flow of runs and has less than 7. Rashid Khan is very good to pick in SRH vs RCB Dream11 Team.

He is a right-arm fast bowler and troubles the batsmen with his swing. Bhuvneshwar is also an excellent death bowler and picks up wickets consistently.

He is a right-arm medium-fast bowler. Sandeep is well known for his swinging deliveries early in the innings.

One of the best batsmen in the world, skipper Virat will be playing at NO.3 for RCB. He is the highest run-getter so far in the history of IPL and has 5 centuries to his name. Virat Kohli is very good Captain choice in SRH vs RCB Dream11 Team.

Finch will be playing for RCB for the 1st time in IPL. He will most probably open the innings and has appeared to be in good form in the recently concluded series against England.

Mr.360, who can play shot to any corner of the ground, will be important in the middle order. AB has three hundred to his name so far in the IPL.

He is an all-rounder who is equally good with both bat and ball. Morris will play a crucial role in the lower middle order with the bat.

He is a right-arm leg-spin bowler. Chahal is an excellent bowler in the T20 format and troubles the batsmen with his wrong-uns.

He is the most experienced bowler in the side. Umesh bowls at a perfect pace and can also play big shots down the order.

He is a right-arm fast bowler and is mostly known for his pace and yorkers. Steyn had played his first three seasons for RCB, and he has now returned to RCB.

He is a right-arm fast bowler and made his debut last season. Saini has a lot of talent and can be a good pick for RCB.

He has been the wicketkeeper-batsman for RCB and has been effective in powerplay overs. Parthiv has a lot of experience and brings balance to the side.

This match is looking risky for Small Leagues, we will update our final team on Telegram after lineups out. SRH vs BLR match is very good for Grand Leagues.