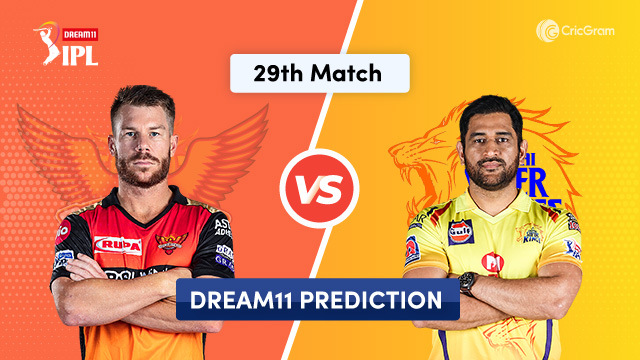 Sunrisers’ performance has been a roller coaster so far as they had played some matches brilliantly, and in other games, they have just been outplayed. They are currently at the 5th position on the points table with 3 wins and 4 losses and 6 points.

Jonny Bairstow and David Warner have consistently performed every match and provided a good start for the team. But the problem has been with the middle-order, who have not been able to bat at the same run rate as the openers. In the last match, Manish Pandey batted well, scoring a fifty.

Williamson and Priyam Garg seemed to be in good touch as they played quick innings, but they posted a below-par score. The impact of Bhuvi not being in the team is clear in their performance as they are struggling to control runs in death overs.

Rashid Khan has been brilliant in the middle overs, not allowing the batsmen to score runs easily and picking up crucial wickets. Natarajan, for the first time, has gone for runs in the death overs. If SRH wants to qualify for the playoffs this season, their bowlers must perform brilliantly and defend the totals.

The woes for CSK continue as they lost their previous match and are currently at the 7th position on the points table with 2 wins and 5 losses and a total of 4 points.

The bowlers are performing well for Super Kings, but their batting has been very poor this season. Watson is struggling to run between the wickets, causing trouble for the batsmen on the other end. Faf du Plessis has been performing consistently and contributing to the team.

Middle-order has been the most significant problem as they have been playing many dot balls, creating pressure on the lower middle order. Jagadeesan played decently on his debut match. Rayudu has appeared to be very slow in his batting approach, which needs to be changed.

MS Dhoni has been trying to play big shots but hasn’t been able to connect them properly and struggling a bit to get back in form. The bowling department has bee perfect as Shardul Thakur has been picking crucial wickets in every match. Bravo and Curran have been bowling decently in the death overs.

Deepak Chahar appears to be back in form and started picking up wickets in the powerplay. Spinners Karn Sharma and Ravindra Jadeja have been brilliant in the middle overs, not allowing the batsmen to play big shots.

Average 1st Innings Score: 178 (From 12 games played at this venue so far in this season)

Average 2nd Innings Score: 150 (From 12 matches played at this venue so far in this season)

Anything over 160 in the 1st innings can be considered to be a fighting total. Total 12 matches played here so far in Dream11 IPL 2020. The team batting first has won 10 games, out of which super overs decided two games.

He opens the innings for SRH along with Warner and made his debut last season. Bairstow scored only 16 runs in the previous match.

Skipper Warner is one of the best batsmen in the history of IPL. He batted well in the last match scoring 48 runs from 38 balls. D Warner is very good Captain choice in SRH vs CSK Dream11 Team.

He generally bats in the middle order and is known for playing according to the match’s situation. Pandey batted brilliantly, scoring 54 runs in the last game.

He is a right-handed batsman. Williamson batted well, scoring 22* runs in the last match.

He is a right-arm leg spinner and is consistent in picking up wickets. Rashid is also very good at controlling the flow of runs. He picked up 2 wickets for just 25 runs in his 4 overs in the last match.

He is a left-arm medium-fast bowler and is picking wickets consistently for SRH. In the last match, Natarajan bowled well but went wicketless. He is very good to pick in Sunrisers Hyderabad vs Chennai Super Kings Dream11 Team.

He is a left-arm fast bowler and troubles the batsmen with his bouncers early in the innings. Khaleel bowled well in the last match, picking up 2 wickets.

He is a batting-allrounder player, who can play big shots. In the previous match he didn’t bat and bowl 3 overs.

He is an allrounder and can hit some big sixes down the order. He did not play the last match.

He is a right-handed batsman and an excellent striker of the ball. Faf has been opening from the past few matches and got out for only 8 runs in the last match.

He is a decent striker of the ball and plays according to the situation of the match. Rayudu scored 42 runs from 40 balls in the last match.

Shane Watson is a dangerous player for any opponent as he can turn the game towards his side on the back of his brilliant batting skills. He scored only 14 runs in the last match.

He is an allrounder and is equally good with both bat and ball. Curran was very expensive in the last match but managed to pick up 1 wicket and got out for a duck.

He is one of the top allrounders in India. R Jadeja can hit some big sixes down the order and pick up a few wickets with his spin bowling. He scored only 7 runs in the last match.

He is death over specialist. Bravo went wicketless in the last match.

He is a right-arm fast bowler and is good at controlling the flow of runs. Deepak Chahar can also be handy with the bat when required. He bowled well, picking up 1 wicket in the last match.

He is a right-arm leg-break bowler and is consistent at picking up wickets. Karn went wicketless in the last match.

Dhoni is one of the best captains and finishers in the world. If he gets in the mood, then he can cause havoc in the death overs. Dhoni scored only 10 runs in the last match and has looked out of form in this season.

He is an excellent striker of the ball and performed brilliantly in TNPL last year. Jagadeesan scored 33 runs from 28 balls on his debut for CSK.