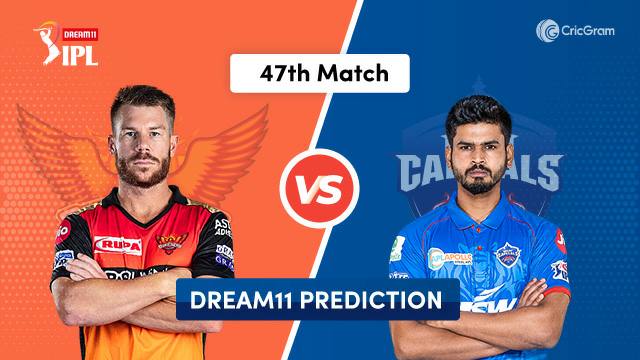 Sunrisers Hyderabad will take on Delhi Capitals in the 47th Match of Dream11 IPL 2020 at Dubai International Stadium, Dubai. We will provide SRH vs DC Dream11 Prediction, Probable Playing XI, and Dream11 Tips.

Sunrisers are having a tough time this season as they are currently at the 7th position on the points table with four wins and seven losses and 8 points.

The batting has been not up to the mark for SRH this season, and even David Warner and Jonny Bairstow have struggled to score runs in most of the matches. With Kane Williamson’s injury, the middle-order is wholly shattered, and except for Manish Pandey, no one has been able to score runs in the middle order.

Vijay Shankar has looked in the right touch in the past few matches. Priyam Garg and Abdul Samad have a lot of talent but have not performed to their full potential. Jason Holder has played only two games so far this season but has been bowling very well.

Rashid Khan has been brilliant throughout the season by picking up wickets in the middle overs and not allowing the batsmen to score runs freely. Natarajan has been quite expensive in the past few matches and has not been able to pick up wickets.

Sandeep Sharma and Khaleel Ahamed have been bowling well but have been leaking runs. Comparatively, SRH’s bowling has been way better, and it’s their batting that has led them down in most of the matches.

Sunrisers are still alive in the race for playoffs, but this season is almost over for them if they lose this match.

The Delhi Capitals have performed brilliantly but have lost two back to back matches and are currently at the 2nd position on the points table with seven wins and 4 losses and a total of 14 points.

Dhawan got out cheaply in the last match after playing brilliantly by scoring back to back the fifties and hundreds. Prithvi Shaw has looked completely out of form, so he was replaced by Ajinkya Rahane, who neither has done much this season.

Shreyas Iyer has been batting decently and playing skipper’s knock in almost every match. Rishab Pant has been having a tough time this season as he cannot hit big shots easily and has also struggled to maintain a strike rate over 100. Shimron Hetmyer has been playing cameos and doing his part pretty well.

The allrounders Marcus Stoinis and Axar Patel have appeared to be in good form and delivered with both bat and ball for the team whenever required. Ravichandran Ashwin, along with Axar Patel, has been handling the spin department very well by picking up wickets in middle overs.

The pace attack of DC has been the best among all the other teams with players like Kagiso Rabada, Anrich Nortje, and Tushar Deshpande, who have been consistently bowling at a speed of 140 Kmph and picking up wickets.

The Capitals need to win one more match to qualify for the playoffs, which shouldn’t be a problem for them, but they would want to win more games and finish the tournament in the top two of the points table.

Average 1st Innings Score: 170 (From 20 games played at this venue so far in this season)

Average 2nd Innings Score: 152 (From 20 matches played at this venue so far in this season)

Anything over 160 in the 1st innings can be considered to be a fighting total. A total of 20 matches have been played here so far in Dream11 IPL 2020. The team batting first has won 13 games, out of which super overs decided three games.

Skipper Warner is the first batsman to score fifty half-centuries in the history of IPL. He scored 35 runs from 20 balls in the last match.

He opens the innings for SRH along with Warner and made his debut last season. Bairstow scored only 19 runs in the previous match.

He generally bats in the middle order and is known for playing according to the match’s situation. Pandey scored only 15 runs from 29 balls in the last game.

He is a right-handed batsman and is an outstanding batsman in the middle order. Williamson did not play the last match.

He is a bowling allrounder. Holder bowled well, picking up two wickets in the last match.

He is a right-arm leg spinner and is consistent in picking up wickets. Rashid is also very good at controlling the flow of runs. He bowled brilliantly, picking up two wickets for just 14 runs in his four overs in the last match.

He is a left-arm medium-fast bowler and is picking wickets consistently for SRH. In the last match, Natarajan bowled well but went wicketless.

He is a batting-allrounder and can bowl medium pace when required. Shankar batted decently, scoring 26 runs in the last match.

He is a left-arm fast bowler and troubles the batsmen with his bouncers early in the innings. Khaleel went wicketless in the last match.

He is a right-arm fast bowler and troubles the batsmen with his swing. Sandeep bowled well, picking up two wickets in the last match.

Shikhar Dhawan opens the innings for DC and has two IPL hundreds to his name. He scored only 6 runs in the last match.

He is a right-arm fast bowler and troubles the batsmen with his pace and bounce. Rabada bowled well in the last match, picking up 2 wickets, and is currently the leading wicket-taker in the tournament.

Skipper Shreyas generally bats according to the situation of the match. He is capable of playing big shots also. In the last game, Iyer batted well, scoring 47 runs.

He is a right-arm fast bowler and hurries the batsmen with his pace. Nortje bowled brilliantly, picking up 2 wickets in the last match.

He is the wicket-keeper batsman for DC and can hit some big sixes if he gets going. Rishabh Pant scored only 27 runs from 33 balls in the last match.

He is a batting allrounder and can bowl a few overs of medium pace if required. In the last match, Stoinis was expensive but managed to pick up 2 wickets and scored only 6 runs.

This young right-handed batsman opens the innings along-side Shikhar Dhawan. Shaw is an explosive batsman and tends to play big shots right from the start. He did not play the last match.

He is a Left-arm orthodox bowler and can also hit some big shots. Axar scored only 9 runs in the last match.

He is a right-arm off-break bowler and can also be handy with the bat down the order. Ashwin was very expensive and also went wicketless in the last match.

This match is risky for small leagues on Dream11, so it is good to play Grand Leagues.